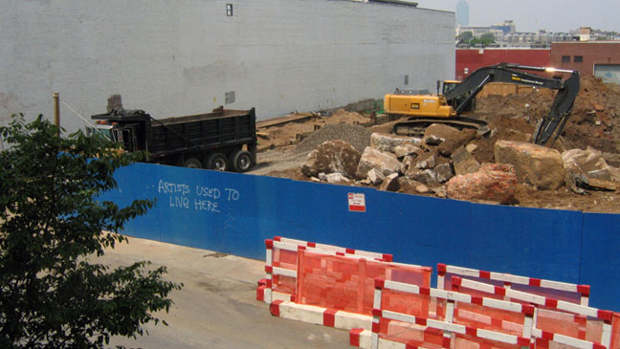 by Brandon Harris
in Directing, Directors, Filmmaking, Interviews
on Mar 8, 2013

“Gentrification is the opposite of the apocalypse. The apocalypse would pause history, level the built world to a pile of trash, and most likely lower rents considerably. Gentrification churns history forward, takes out the trash, carts away rubble, hides the poor, makes you work more and more to manage your rent, and encrypts the past, when you didn’t have to work so many jobs just to fucking live here, behind its glossy surfaces.”

Colson Whitehead, in an essay about how his adopted neighborhood of Fort Greene was changing and would continue to change (perhaps to no one’s satisfaction save the city fathers, eloquently detailed in last year’s Battle for Brooklyn) after the 2004 announcement that Atlantic Yards would become the Barclays Center, suggested that “everybody is somebody’s gentrifier.” Perhaps so, but don’t tell that to Su Friedrich, who has made the most salient and personal film about Brooklyn’s everchanging face since Hal Ashby’s The Landlord appeared in theaters some 43 years ago. Her Gut Renovation is bound to polarize audiences. It’s a polemical howl in the night, a desperately angry and sidesplittingly funny look at one oh so mythogized neighborhood’s transformation/gentrification/urban renewal from the perspective of a woman who’s utility to those who stand to profit from such things is marginal.

Friedrich lived in Williamsburg from 1989 to 2008 in a former iron works that she and her partner and several other artists shaped into a home with their own hands. Perhaps this odd assortment of mom and pop shops, ethnic greasy-spoon eateries, industrial shops and artists’ studios was bound to meet change into an enclave for the self-consciously hip and wealthy who would like to think of themselves as hip, but that doesn’t make it any less painful for Friedrich and her ilk. After 2005’s rezoning, which included a 25-year tax abatement for developers, Williamsburg, already known for its PBR-swilling, Mogwai-listening hipsters, became an upper middle-class, lower upper-class bohemia, a trust fund baby’s paradise. Friedrich moved into the neighborhood from Laws of Gravity and left the one from Girls.

Friedrich films encounters/confrontations with her own gentrifiers on the street (one of the movie’s best moments is when she infiltrates a party in an exceedingly pricey “loft” and steals a bottle of wine) and  finds several effective aesthetic motifs to express her discontent. Most notably, she counts all the new buildings popping up on a red and white map which renders them as if they were some sort of invasive virus, indulges in petty vandalism/thoughtful graffiti (“Artists Used To Live Here,” she spray paints on a construction site wall across from her soon-to-be-“renovated” loft), visits the lobbies and show apartments of the sparkling new buildings popping up all over the neighborhood with their assinine brokers, and occasionally stops to terrorize the younger, more affluent cosmopolitans who will replace her and the last old working class Italian and Polish and Dominican holdovers.

Friedrich, who has been practicing her potent brand of first-person documentary since the late 70s, has at last made a film essay that is of a piece with the work of heady French names like Godard and Varda. After bowing in Berlin, it made its theatrical debut this week at Film Forum, where it runs through next Tuesday. 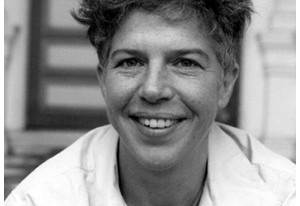 Filmmaker: The movie reminded me a lot of Agnès Varda’s artisan personal film essays, as well as some of the 70s work of Jean-Luc Godard, not just in the aesthetic tropes but in the inextricable connection between filmmaker and subject matter. Had you consumed that stuff before setting out to make this?

Friedrich: Certain filmmakers have been very instructive to me. What they do has taught me all sorts of interesting things about how to approach film. In the case of Gut Renovation, what Varda did in The Gleaners and I was very instructive. I found that the way she dealt with a very large subject — gleaning throughout history — combining that with the way she shared her personal relationship to gleaning, was really fantastic. I really liked the balance that she struck. Her editing was really deft, moving back and forth between the personal and the historical. I think she found very clever ways of doing that. So I would say that was a lesson to me when I approached the editing of this film.

Filmmaker: Was the impetus of the film the rezoning of the neighborhood and the changes that began almost immediately after, or were you seeing hints earlier in the aughts that the neighborhood was going to change in a way that made you contemplate making this film?

Friedrich: It was primarily motivated by the rezoning. Before that I had been busy working on other films and I was very aware of how much the neighborhood was changing. Occasionally I would think, “Oh, I should get some footage of this building that’s being torn down,” or whatever, but really it was seeing the news the day it announced in the New York Times that made me think, “We’re in for something really big now.” And then seeing things start to go down around me, I started to run around with my camera, but it really was the rezoning that motivated me most directly.

Filmmaker: Did you feel when you moved to the neighborhood in the late 80s that you were a gentrifier yourself? What are the value differences between that type of gentrification, on the part of working artists of a variety of class background moving into a lower and lower and working class spaces, versus what we’re seeing today with young TV stars and almost hip yuppies pricing those same individuals out? In many places in the country, including where I’m from in Cincinnati, Ohio, they’re just skipping the artist vanguard phase — the moderately hip yuppies are their own vanguard.

Friedrich: It’s all getting very streamlined now. I’ve heard of that in other towns, where there is sort of a desolate downtown and developers come along and create what seems like the artist loft thing without actually having artists living there in the first place. I’ve heard that there’s a development in Las Vegas now that is supposed to be modeled after SoHo. [laughs] So it’s gone that far. This is a very complicated question. Part of what I’m seeing in showing the film is that it’s getting a lot of discussion going. Some of the things that people say are disturbing to me but still, it seems that it really puts the conversation on the table. This is a good thing.

When I moved into Williamsburg in 1989, it didn’t feel like an invasion. A lot of people I knew were living in really tiny, crummy little places and had to rent a separate studio to do their work and needed to have a more viable place to live and work. It was a neighborhood that seemed to provide that, so I knew a lot of people who moved in. We were very involved in the neighborhood. People shopped at the stores that were already there. We liked it as it was. Didn’t feel that it should change from what it was before we arrived necessarily. We felt like we’d come to this place where there was room for us and we can live side by side with the people who have been living here. This is great. The media and the real estate interests noticed that this had happened and saw the potential for making a lot of money and then they moved in on it. There were the waves after the artists moved in. Everyone talks about the hipsters moving in and whatnot — “Who are they, what are they doing, they’re raising rents and all that,” so it was sort of gradual. But I think that there is something very particular about Williamsburg as opposed to, say, Park Slope.

Park Slope was completely gentrified over the course of about 15 years without any artists moving into the neighborhood. Perhaps a few did, but the gentrification happened there in no way because of a first wave of artists. It also happened in Park Slope without a top down plan from the city. I think what was so shocking about seeing that headline in the New York Times in May of 2005 was that they had concocted this thing and now it was going to happen, regardless of how anybody felt. There had been a lot of community objection to the earlier plans, there had been a lot of efforts by the community to suggest improvements to the neighborhood. Those were approved in 2002 and then more or less disregarded by the time the place was rezoned. It wasn’t as if people were unaware of the interest the city had in the neighborhood. When that happened, it was really just a done deal. I think it is very particular as a phenomenon and people should think about this because they can and will do it in other neighborhoods. Now they’ve done it in Greenpoint. NYU is preparing to do it in the West Village with this city-approved “Here we come, we’re doing this, whether you want it or not” attitude.

Filmmaker: There’s a palpable anger in the movie that for many people is going to be a turnoff. For me it was actually one of the most appealing aspects of the film. [laughs] What have the responses been like? I imagine it can change quite drastically depending on the type of audiences you’re showing the film to?

Friedrich: The experience has been mixed. For the most part, people applaud and say they like it, but there are always people who say something during the Q&A or in the hallway outside who were disturbed by the anger that I expressed. I expected that because I think that if you’re going to speak very strongly on a subject and from a particular vantage point, there are bound to be people who will disagree with you. There’s been a strange thing that’s happened with journalism that there’s this feeling where you shouldn’t be to0 critical or we better be real careful to present both sides so it leads to a place where you have art magazines that no longer carry critical reviews anymore because they’re afraid that then the advertisers won’t buy ads and on the cable news they’ll be talking about some really egregious situation like some river clearly being poisoned by fracking but they have to bring in the person who claims that’s not happening for the sake of objectivity. So I feel like I’m operating in this sort of strange world now.

I felt like I was very angry about what happened and I knew a lot of other people who were really angry. You can read interviews in the local Brooklyn newspaper about an Italian couple who owned their home in Williamsburg for 50 years, their parents and grandparents lived there, and they’re really mad. So it’s not just some aggrieved artists who were angry and I thought it was part of my obligation to express that anger. I also felt that I expressed a certain amount of sorrow and loss and humor as well. I’ve heard audiences laugh. So that’s what it is. I have to live with the responses whether they’re positive or negative. That’s the consequence of doing something like this.

Filmmaker: Where did you end up?

Friedrich: I ended up in Bed-Stuy. I looked far and wide in many different Brooklyn neighborhoods and various circumstances led us here.

Filmmaker: I live in Bed-Stuy.