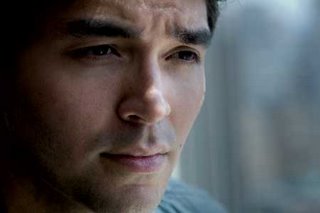 Phillip Van, who was one of our “25 New Faces” last year (and who is photographed here by Richard Koek), is taking part in the Tribeca All Access program and is interviewed by the Film Panel Notetaker. He discusses And She Stares Longingly at What She Has Lost, the short film he made as part of the Little Minx project. He talks about his TAA project Darkland, Carl Jung, Richard Nixon, and his short, High Maintenance.

I made High Maintenance to touch upon behaviors that I see in excess today among friends and in society; things like rampant consumerism, serial monogamy, lives predicated entirely on connections through technology or some sort of networking platform, and a real, new kind of loneliness. We’re more connected now than we’ve ever been before but somehow, also more disconnected. I think this relates directly to the filters that we use to reach out and connect to one another. The film was a way for me to turn those themes into a story and I did it through the characters of Jane and Paul. Jane is looking for a man by ordering designer robotic men online, tweaking them to accommodate her desires, and making sure the upgrade is better than the first version of the husband she bought. In that process, she tests the degree to which men are interchangeable. In one respect, the film comments on how programmatic love can be in human lives. We’re susceptible to a series of stimuli that induce chemical reactions. When we’re told what we want to hear, our response is mechanical on a certain level. In another respect, by attempting to demonstrate that love is replaceable, the film becomes a strong argument for the opposing truth. It pinpoints a kind of alienation, depravity and need for companionship that is all too human.