MADONNA AND THE UNCANNY VALLEY 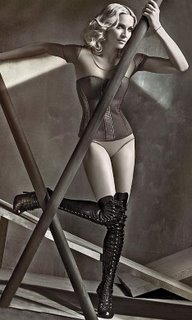 Jason Kottke has a fascinating entry today at his Kottke.org entitled “Approaching the Uncanny Valley from the Other Direction.” In case you haven’t heard about the “uncanny valley,” it’s a term originally created to apply to robotics that can now, Kottke says, refer to the human visage in the age of plastic surgery.

First, from Dave Bryan at Glimpses:

Japanese roboticist Doctor Masahiro Mori is not exactly a household name—but, for the speculative fiction community at least, he could prove to be an important one. The reason why can be summed up in a simple, strangely elegant phrase that translates into English as “the uncanny valley”.

Though originally intended to provide an insight into human psychological reaction to robotic design, the concept expressed by this phrase is equally applicable to interactions with nearly any nonhuman entity. Stated simply, the idea is that if one were to plot emotional response against similarity to human appearance and movement, the curve is not a sure, steady upward trend. Instead, there is a peak shortly before one reaches a completely human “look” . . . but then a deep chasm plunges below neutrality into a strongly negative response before rebounding to a second peak where resemblance to humanity is complete.

This chasm—the uncanny valley of Doctor Mori’s thesis—represents the point at which a person observing the creature or object in question sees something that is nearly human, but just enough off-kilter to seem eerie or disquieting. The first peak, moreover, is where that same individual would see something that is human enough to arouse some empathy, yet at the same time is clearly enough not human to avoid the sense of wrongness. The slope leading up to this first peak is a province of relative emotional detachment—affection, perhaps, but rarely more than that.

Kottke links to a New Yorker article on Pascal Dangin, photo retoucher to the stars, who makes “a 50-year-old Madonna look like a recent college graduate who has never lifted a weight in her life.

The uncanny valley comes into play here, which we usually think of in terms of robots, cartoon characters, and other pseudo anthropomorphic characters attempting and failing to look sufficiently human and therefore appearing creepy and scary. With an increasing amount of photo retouching, postproduction in film, plastic surgery, and increasingly effective makeup & skin care products, we’re being bombarded with a growing amount of imagery featuring people who don’t appear naturally human. People who appear often in media (film & tv stars, models, cable news anchors & reporters, miscellaneous celebrities, etc.) are creeping down into the uncanny valley to meet up with characters from The Polar Express. I don’t know about you but a middle-aged Madonna made to look 24 gives me the heebie-jeebies.

I thought of all of this when I was forwarded a link found on the Coudal Partners website to this reel by video effects artist Bill Pollock. Click on the link and watch as the video toggles through a roster of your favorite celebrities and makes their various facial imperfections magically appear and disappear.