Snow is pounding Park City; people are hidden under hoods and hats, the snow burying everything under a deep pile of grey and white. This is perfect weather for introspection and so far, the narrative films at Sundance have done little to break the mood. I couldn’t be happier. Early on, Sundance has featured films united by loss, by the end of relationships, by heartbreak and the assertion of possibility. I am no glutton for sadness, but there is something about the dark skies and looming mountains that make the melancholy almost comforting.  If you look hard enough, every festival unveils a thematic strain, and Sundance 2012 is no exception; so far, this is the festival of falling apart. 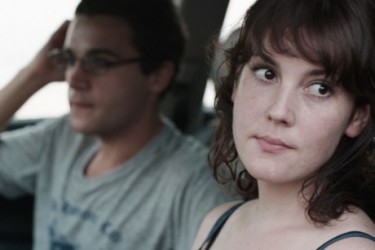 In Todd Louiso’s Hello I Must Be Going, Melanie Lynskey gives a beautiful performance as Amy, a recent divorcée who has moved back into her parent’s guest room in order to avoid coping with the failure of her marriage. Her mother Ruth (Blythe Danner) is unable to keep her disapproval to herself, forcing Amy to try to come to terms with her feelings while trying to fit in with familial expectations. After meeting the teenage son of her father’s potential client, Amy eases herself back into life, her affair with the much younger man an opportunity to find feeling in a world of other people’s needs. While the film’s narrative treads some familiar ground, any trace of cliché is erased by Lynskey’s fully-realized performance; it is one of the most rounded, human portrayals I have seen on the screen in ages and it is a credit to both Lynskey and Louiso that the character is utterly believable.

Lynskey never makes a false choice; every facial expression, every gesture is in tune with Amy’s position in the story, her relationship to the other characters and the changing landscape of her feelings. As her connection with her young lover waxes and wanes, Amy hits the reset button on her sexual identity, participating in secretive sexual encounters that would make any teenager proud. Louiso fills these scenes with real energy, showing the power of sex and desire as both a liberating force and a real complication. By embracing her youthful desires from a new position of power, Amy discovers herself and the depth of her needs as a woman, making Hello I Must Be Going a coming of age tale of sorts. While there are plenty of laughs, it is Louiso’s humanism and Lynskey’s complete embrace of her character’s rich complexity that makes the film something special. 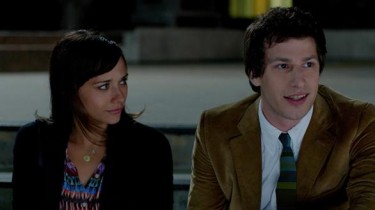 Rashida Jones has a different task in Celeste And Jesse Forever, another dramatic comedy about a woman facing down the end of her marriage. Where Lynskey’s Amy must make the journey from doubt to certainty, Jones’ Celeste is the exact opposite; a cocksure “trend spotter” who thrives on always being right, Celeste has a fun-loving relationship with her husband Jesse (Andy Samberg), a floundering artist looking for his place in the world. Of course, their relationship isn’t what it seems; despite being best friends and despite living on the same property, Celeste and Jesse are getting a divorce. This being a young, modern couple, friendship and magnanimity come first; there is no recrimination, no anger between the couple, only a continued attraction and concern, with no obvious reason as to why the marriage is coming to an end.

When Jesse decides to leave Celeste and the house, the couple’s on-again, off-again relationship becomes more and more complex, allowing their motivations and true concerns to bubble to the surface and reveal themselves. And what is revealed ends up being a moving statement about a woman’s desire to be loved while maintaining her freedom and identity. Beneath its jokey surface, Celeste And Jesse Forever is actually a very powerful examination of modern womanhood, a film about what it means to be the smartest person in a relationship, about the restrictions of marriage, the desire for professional success and the need to live a happy life. This is the anti-Sex In The City, an important rejection of the “have it all” optimism of so many films about women’s lives. Celeste and Jesse is a movie about sacrifice and loss and Jones is both wickedly funny and truly vulnerable as Celeste, a woman who uses humor and words to keep her emotions at bay. When she finally confronts her true feelings and lays her soul bare, it is too late to save her marriage but just in time to offer hope for independence.

Ira Sachs’ devastating Keep The Lights On examines the end of love from a much darker place; the relationship between an addict and his partner over the course of nine years. Erik (Thur Lindhart) is a Danish documentarian living in New York City who spends his nights trolling phone sex chat lines for a hook up. When he meets Paul (Zachary Booth), the pair slowly make their way from sexual anonymity toward a relationship. Once the couple get to know one another, Paul’s decline into crack cocaine addiction slowly asserts its grip on their relationship. What could have been a routine film and about love and addiction becomes something else entirely; instead of falling into the tropes of traditional dramas about the horrors of drug abuse, Sachs maintains a brilliantly oblique narrative style that delineates sex and desire while maintaining a focus on Erik’s experience as the lover who must forgive and embrace his partner, regardless of his transgressions.

As the film spills down the years, as Paul and Erik come together in the glow of recovery and fall apart in the throes of relapse, Sachs describes love as both a liberating force for his characters and a prison of sorts. There is a profound understanding of the joys and limitations of queer culture on display in the film and Sachs pulls no punches in showing the power of sex to both unite and destroy. In one of the film’s best (and darkest) moments, Erik hears Paul, high on crack, having sex with a young hustler. Afraid to abandon Paul to his addiction, Erik walks into the bedroom, sits on the bed, and holds Paul’s hand as he moans with pleasure. It is a moment of real grace that is terrible and deeply moving all at once. 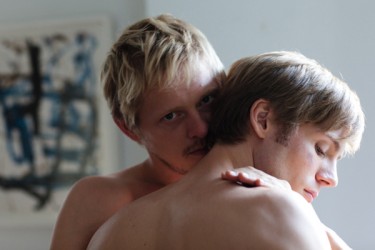 Structurally, Keep The Lights On calls to mind Ingmar Bergman’s Scenes From A Marriage, its linear, episodic storytelling creating the texture of memory from isolated moments that range from the dramatic to the mundane. I loved the film for this choice. Instead of creating a narrative that simply feels like a story, Sachs has created something that feels like directly experiencing memory itself; dates and times and locations fall away to reveal feelings and moments, triumphs and regrets. Instead of reciting a litany of romantic encounters and dark traumas, Sachs keeps much of the action off camera, deftly implying tragedy rather than underlining it. The film’s soundtrack, haunted by the gorgeous voice and cello of the late, great Arthur Russell, serves to expand the emotional palette, drawing the viewer deeper into Erik’s suffering and his ultimate freedom. This is personal filmmaking at its most eloquent and poetic, a movie that sent me reeling.

Amazingly, all three of these films end with the same moment; the protagonist, finally having turned the corner on a failed relationship, sets out alone to find happiness in the world. In each case, the moment is ripe with both loss and possibility, failure and triumph. Most importantly, each of these protagonists finds liberation in solitude, in embracing their identities outside of their partnerships. As each film concluded on a note of self-forgiveness and forging ahead alone, these three very different films provided a radical model for happiness, each proposing that letting go can set you free.