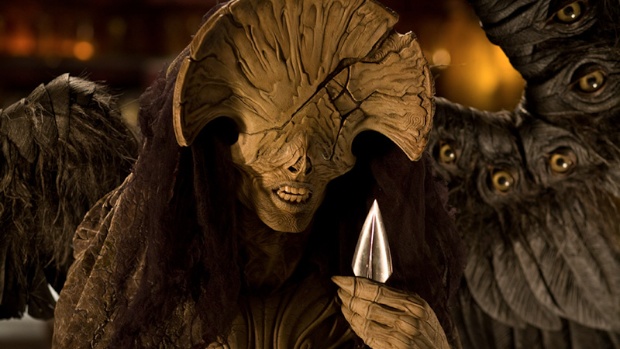 The Angel of Death from Hellboy II: The Golden Army.

Bruce Sterling’s closing remarks at SXSW Interactive have been posted at Wired’s Beyond the Beyond blog. It’s a long talk on the aesthetic and moral dimensions of disruption, an emergent Southwest and the tackiness of 3D figurines. An excerpt:

And then there’s this empty pretense that these innovations make the world “better.” This is a dangerous word. Like: “If we’re not making the world better, then why are we doing this at all?”

Now, I don’t want to claim that this attitude is hypocritical. Because when you say a thing like that at SouthBy: “Oh, we’re here to make the world better” — you haven’t even reached the level of hypocrisy. You’re stuck at the level of childish naivete.

As always, a must read. Or, perhaps you’d like to listen to them.

At the IFP, Marc Schiller says, if you want to be a successful indie filmmaker, then act like a rock star. An excerpt:

Today we live or die on a model that is completely dependent upon the amount of screens a film plays on. Common wisdom is that the more screens your movie is playing on, the more money you’re making. But for most films, this is a complete fallacy in which demand is not meeting supply and costs are exceeding revenue. And because of this, for far too many good movies, the theatrical window has become nothing more than a loss leader.

But it does’t have to be this way.

As bands have learned long ago, the key to making money is to make things feel exclusive and special, and then work to get the “average spend per customer” higher. But today, when someone goes to the movies, the sole beneficiary of a higher “average spend” is the theater owner, as increased revenue can only come from the concession stand. But if that filmmaker “owns” the live events for their film, just as James and Lisanne did with INDIE GAME, and then sell merchandise directly to fans as Tom Putnam and Brenna Sanchez have done with BURN, the money they will make will be considerably more than if they had if they had sold their films to a traditional distributor. Its not a model that will work for every film and every filmmaker. But for those that it IS right for, the rewards will be well worth the effort.

“Paucity of Art in the Age of Big Data”: At the Millions, Lydia Kielsing wonders why there’s not a great novel about the world of tech.

This site runs on WordPress. And, if we’re not careful, writes Dan Goodin at Ars Technica, we could be creating a super botnet.

Facebook is not enough, argues Reid Rosefelt, who previously thought filmmakers should focus their marketing on the social media platform:

To sum up: it’s a very big deal for your Facebook marketing when you spend years building up a following of thousands or tens of thousands and then have to pay hundreds of dollars to reach them; it’s bad news for us as marketers–and users–to have too many ads on Facebook pages; and it truly sucks that the whole foundation of having fans on our pages is contaminated by spam.

Should we give up on Facebook for marketing movies? Absolutely not. It is still the biggest social media site and the most used. Facebook will continue to be extremely effective for tons of people. But I will no longer advise people that they can get by with Facebook alone. You need to develop a social media strategy that keeps Facebook as a home base but you must also reach out to other platforms.

At BLDGBLOG, Geoff Manaugh and Nicole Twilley interview Mike Elizade, founder of the effects house Spectral Motion. As always with these writers, the questions are as interesting as the answers:

Manaugh: You mentioned animatronics and puppeteering. We were just up at the Jet Propulsion Lab in Pasadena yesterday afternoon, talking to them about how they program certain amounts of autonomy into their instruments, especially if it’s something that they’re putting on Mars. It has to be able to act on its own, at times, because it doesn’t have enough time to wait for the command signal from us back on Earth. I’m curious, especially with something like the robot combat show, how much autonomy you can build into a piece. Can you create something that you just switch on and let go, so that it functions as a kind of autonomous or even artificially intelligent film prop?

Elizalde: It really depends on the application. For example, when we’re filming something, a lot of times there’s a spontaneity that’s required. Sometimes actors like to ad lib a little bit. If we need to react to something that an actor is saying via a puppet—an animatronic puppet—then that live performance really is required. But we always have the option of going to a programmable setup, one where we can have a specific set of parameters, performance-wise, to create a specific scene.

For live performances on a stage, we’d probably want to program that with the ability to switch over to manual, if required. But, if it’s scripted—if it’s a beat-by-beat performance—then we know that can be programmable. We can turn on the switch and let it go. In the middle of that, you can then stop it, and have a live show, with puppeteers in the background filling in the blanks of whatever that performance is, and then you can continue with the recorded or programmed performance.

The Veronica Mars Kickstarter campaign has ended, and it has raised over $5 million. Creator Rob Thomas discusses at Wired:

I think it will be an important pioneer for a certain type of film. I’m not convinced that this will revolutionize how most movies get made, but I think there’s an opportunity now for projects that are similar to ours – that have some bit of public support behind it before they launch on Kickstarter… For something like Veronica Mars, where there’s a bit of a cult following and people are really emotionally invested in it, I do think this is a new avenue. There is no other way that this movie was going to get made.

Warner Bros owns the title Veronica Mars. I don’t… The lowest-priced movie Warner Bros tends to makes is a $30 million, and it goes up from there. They make Lord of the Rings. They don’t make the Veronica Mars movie, typically. So trying to convince Warner Bros to make a $30 million Veronica Mars movie just wasn’t going to happen, for understandable reasons. When I took this project in, I didn’t take it in through their feature division. I’m making the movie with Warner Bros Digital; they do a lot of the smaller budget [projects]. I think we’re only going to be their second movie with a theatrical release; they typically do things straight to digital and digital download.

With this model, it’s almost a marketing device, a way to judge if there was enough interest in a movie this size. For a Friday Night Lights movie or a Freaks and Geek movie or a Chuck movie, I think it could be a possibility. I think this opens up a door. What I’m interested in as a writer is [if] a writer optioned a book and brought on an actor with some name value – if that combination could raise the money on Kickstarter to make a movie.

Speaking of Kickstarter, here’s a tax day post — Fidel Martinez at the Daily Dot on the financial ramifications of Kickstarter campaigns:

In short, money raised from Kickstarter and other crowdfunding platforms is considered to be taxable income. Amazon Payments, which handles the credit card transactions for Kickstarter, disburses the funds to the project creator and sends them a 1099-K, a tax form that reports “Merchant Card and Third Party Network Payments” to the IRS. In this particular case, a pledge made by a fan to a project would be considered a third-party network payment.

This fact seems to be incongruous with Kickstarter’s claim that the company is not a store. But as Evan Blanc, a certified public accountant (CPA) with Austin, Texas-based Sound Business Management, told the Daily Dot, that doesn’t matter.

“Although musicians may not necessarily be selling something via Kickstarter, they are still entering into a transaction with their backers,” he noted. “If they reach their goal of ‘X’ amount of dollars, they have certain conditions they’ve agreed to make. They should consider the money as income because the IRS defines gross income from ‘whatever source derived,’ unless specially excluded.”