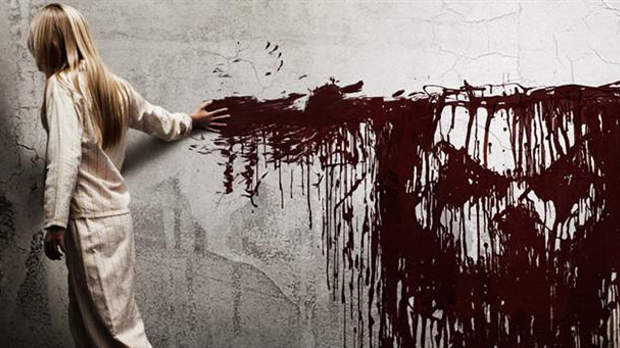 A mainstream production with a mainstream star, Sinister employs such horror movie tropes as a nice family moving into a new house with a past, the supernatural traveling through photographs and movies, and suspiciously troubled children. Yet despite its potentially cliché setup, the film feels unexpectedly fresh; a mash-up of ghost story, serial killer thriller, and Ringu-style photo-phobia that is more than the sum of its parts. The film is anchored by a story of believable domestic strain, and probes slightly deeper than many films in its exploration of the primal idea that images, like the film itself, represent a potentially dangerous portal into a world beyond our own. With a solid story to support familiar tactics – tension builders like a flashlight-illuminated crawl through a creepy attic and jump-scares like the monster in a still images suddenly turning its head to face the audience – Sinister feels more like a modern update than a formula-driven retread.

Ethan Hawke plays Ellison Oswalt, a true crime writer who enjoyed one hit book a decade ago followed by a string of failures. He claims that his motivation continues to be the search for justice in instances where the local police may have failed (which makes him far from popular with his new local sheriff). However, the fact that he has driven his family into the ground financially, refuses to tell them he has moved them into the house in which his latest subjects were brutally murdered, and watches his old television interviews on a loop a few times a week suggests his obsession may be more about ego than making the world a better place. While researching the deaths of the last residents of the house, a mother, father and two children hung from a tree while the third child mysteriously disappeared, Ellison discovers a box full of 8mm films depicting the horrific scene, among half a dozen others with cute labels like “B.B.Q.” and “Pool Party,” that belie their sinister content. The more he watches these films, the more he feels compelled to watch them, regardless of his family’s happiness and safety, increasingly malevolent supernatural activity, and his own sanity.

It is difficult to remember the last time Ethan Hawke was this enjoyable onscreen. There is something about his casting that is simultaneously unexpected – his only other horror film was Daybreaker, and the subdued vampire role didn’t quite suit him – yet familiar. If his arrogant, self-righteous 90s slacker from Reality Bites had grown up to have a slightly preachy social conscience and a family, Troy would not be so far from Ellison Oswalt. Hawke’s performance is key because his character appears in virtually every scene of the film, often just watching and reacting to the goodies he found in his box of snuff. Yet with such limited action Hawke’s Ellison is able to early on spark the uncomfortable suggestion that his own character flaws are exacerbating the way in which his family has been marked for tragedy. At one or two points his frustration boils over into rants about success and being held back by a family, rants that are clearly linked to his sense of manhood, that recall those of Jack Torrance just before he went on an semi-successful murder spree in The Shining. The relationship between Ellison and his children, Ellison and his career, even Ellison and himself, is troubled to say the least, and the forces in the house feed off of that energy, as do viewers of the film, absorbing the unnerving domestic tension long before any paranormal activity gets going. This recalls an interview I conducted with Ben Wheatley for Huffington Post, in which he talked about how, remembering the way the tenor of an argument between adults set him on edge as a child, he suggested violence through the fighting between Jay and Shel in Kill List before any physically violence takes place. Similarly, while the arguments between Ellison and his wife are hardly enacted with the restraint of an Ibsen play, they nonetheless contribute a smart layer to the overall sense of unease.

Many of Derrickson’s choices, even seemingly minor ones, add to the unique sense of overall tension being built here, the relentlessly anxiety-inducing atmosphere that allows the film to live up to its title. The use of short, graphic snuff films, for example, is risky enough for a cineplex movie, let alone using one of them to open the film (which really pays off, effecting immediate discomfort and disorientation before the story even begins). Then there is the fact that those films are on 8mm, a stock still associated with funny old home movies. Just last week, in a review of V/H/S, I mentioned the relatively novel idea of that particular medium having a power to convey horror with its very aesthetic; 8mm has has the same effect and has been a shorthand for potentially disturbing stuff (whether that means your grandparents in a compromising private moment or, as in this case, someone setting a car full of live people on fire) for much longer than video. If anything its obsolescence and rarity make it even more suspect now. For such a scary film, Sinister also boasts a number of oddly funny moments, non sequiturs like the way-too-young grad student traipsing around in the background of a video chat with a paranormal professor played by Vincent D’Onofrio.

Sure does have some heavy-handed moments. Ellison’s comically clunky questions ( “Where is she?” and “Who is this?”) marking his crime scene photographs or even asked aloud, for example, are more like exposition for the benefit of the audience than the process of a supposedly very talented writer. And at times the score sounds like a chorus of that cheesy “Ooooooh” sound usually employed by masked teenagers working a seasonal suburban haunted house. However, these missteps are ultimately forgivable in the midst of all the terrifying fun, and appear to occur only in the first little baby steps of the film. By the time the white-faced man from the 8mm films begins appearing in the bushes, or a gang of ghost children swarm around Ellison, moving with eery elegance like a troupe macabre modern dancers, either the film has shed the awkward mistakes of its earlier minutes, or I was far too engrossed to notice them.

FARIHAH ZAMAN began working in film as a Programmer for Film South Asia documentary film festival before moving to New York in 2005, where she was the Acquisitions Manager at independent film distribution company Magnolia Pictures. In 2008 she coordinated IFP’s No Borders program, the only international co-production market in the U.S., before becoming Program Manager of The Flaherty Seminar until 2010. Farihah currently writes forThe Huffington Post, The AV Club, and online film journal Reverse Shot, among others. She is co-directing a documentary, REMOTE AREA MEDICAL, set for release in 2013.