by Jane Schoenbrun
in Filmmaking, SXSW, SXSW Features
on Mar 9, 2012

Working from an uber-quotable central question – “pregnant from rock and roll?”- Electrick Children follows Rachel (Julia Garner), a young woman growing up in a fundamentalist Mormon household that eschews all forms of modern technology. When, after her fifteenth birthday, Rachel accidentally hears a cassette tape with rock music on it, and subsequently discovers that she’s immaculately pregnant, she puts two and two together and answers the question above with a resounding yes.

The debut feature from director Rebecca Thomas, Electrick Children follows Rachel to Las Vegas, where she searches for the singer on the tape (who she assumes must be the father), and finds herself enveloped into a culture and scene in stark contrast to her simple upbringing. The film recently opened the Narrative Competition in Berlin, where it was lauded as an emotionally gripping coming of age tale. 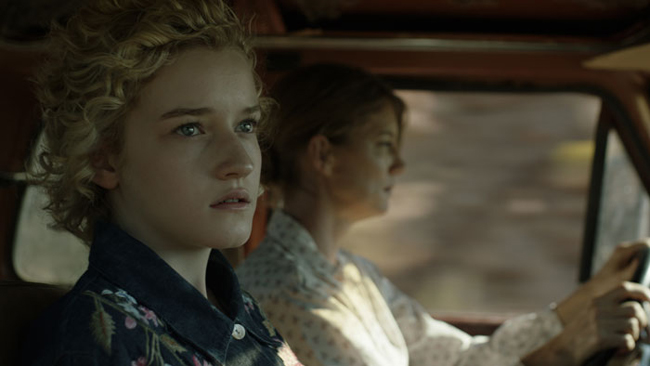 Filmmaker: How much of Electrick Children is inspired by your own upbringing in the Mormon faith? Were there remembrances or feelings from your youth that you were hoping to explore?

Thomas: My upbringing was very different from the lifestyle of the family depicted in the fundamentalist Mormon community I created in Electrick Children. There are of course similar feelings that I share with Rachel that I wanted to explore. That is, mainly, the feeling of wanting to find something (or in her case someone) very specific, and having to leave home to find it. It’s the feeling Dorothy has in The Wizard of Oz when she sings “Somewhere Over the Rainbow.” It seems like a youthful plight to think there is someone or some place magical beyond the rainbow that will make things better or solve a problem. Rachel uses her very specific faith to power her through her journey. For me, Mormonism is something I know personally, so it was simply easy for me to write specifically.

Filmmaker: Are you still a practicing Mormon? What’s your view on the anti-technology ethos espoused by Rachel’s family in the film?

Thomas: The lifestyle of the family in the film is inspired by real fundamentalist Mormon colonies in Southern Utah. However, I made up my own rules for this particular colony. I’m not anti-technology, but simply used it as a device to create a dramatic circumstance

Filmmaker: Do you recall the first time you heard rock and roll? Was it a life-changer?

Thomas: Growing up, my dad listened to The Beach Boys. They are definitely a nostalgic band for me. My dad could play ‘Stairway to Heaven’ on the guitar (at least the first minute or so of it). I remember seeing the sheet music and studying the words. The story there was very magical for me, although I didn’t really understand it completely. I’m the youngest of five, so of course I was very influenced by my siblings taste in music. I shared a room with my older sister, so by default I listened to what she listened to. This included a lot of punk and eventually some ska.

Filmmaker: Tell me a bit about the process of casting Julia Garner. What made you think she was right to play Rachel?

Thomas: Casting the lead role was very difficult for me. I had found a few girls who seemed almost right for the role, but I wasn’t sure they could carry the movie. We were down to the wire, only a week left before shooting, and I hadn’t cast anyone. Another actor, Peter Vack, recommended Julia. I looked up her IMDB page and saw that she was stunning. We immediately got an audition from her. She was one of the only actresses I found who looked young enough, but also had a mature emotional depth. It was important to me that whoever played Rachel felt like she was from a different time period. Julia looks and seems like a film star from the 40s. Liam Aiken (who plays her brother) also has this quality. Two days later I cast her and she was flown out to set. We didn’t have any prep time, but Julia and I worked well together on set as it was basically both of our first features.

Filmmaker: Was there anything about the audience response in Berlin that surprised you? And how do you hope Electrick Children plays at SXSW?

Thomas: Berlin was very warm toward the film and seemed to be willing to laugh and cry with it. I hope SXSW goes just the same. Both Berlin and Austin are two cities I visited for the first time in the past few years that really left an impression. I’m really lucky to get to screen the film in these places. Austin will also be a little warmer than Berlin… So that’s a plus.