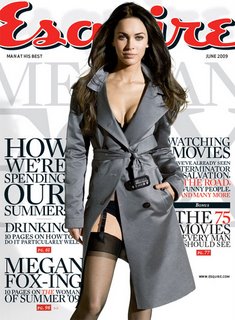 In our current issue there’s a piece on still cameras used to make movies, and now we’ve got motion picture cameras used to shoot stills. Of course, motion picture cameras have been able to shoot stills for a while, but you wouldn’t expect to see one on a magazine cover. This month, photographer Greg Williams has photographed Megan Fox for the cover of Esquire using the RED ONE camera.

For the first time in Esquire‘s history (and, we imagine, magazine history in general), a cover image was shot as a video. Using the RedONE, a video camera that captures images at four times the resolution of high-definition, photographer-director Greg Williams (see below) recorded ten minutes of loosely scripted footage with Fox — getting out of bed, rolling around on a pool chair, inexplicably lighting a barbecue.

“It allowed her to act,” Williams says. “She could run scenes without being reminded by the sound of a shutter every four seconds that I was taking a picture. As in still photography, a lot of it is capturing unexpected moments. This takes that one step further.” He then went back and pulled out the best images, which you can see in Esquire‘s June issue, on sale May 10. Plus, there’s a fantastic by-product: Even though we made the film to get the stills, we were left with ten bewitching minutes of footage of a beautiful woman. We edited it down to a mini movie, which will be available at esquire.com/megan on May 4.

UPDATE: I’ve linked to the short Red One Motion Study with Test Subject Megan Fox above.