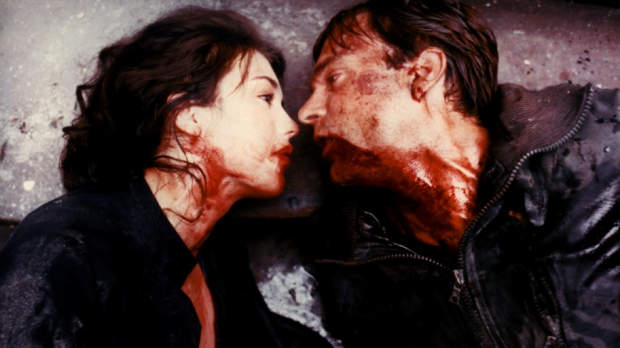 In a fit of extreme ballsiness, BAMcinématek is currently plummeting down the rabbit hole opened by Polish filmmaker Andrzej Zulawski, showcasing a complete retrospective appropriately entitled Hysterical Excess. Zulawaski’s films employ many hallmarks of genre filmmaking: the paranormal, the psychedelic, blood and guts. As well, beasties and boobies make appearances somewhat to excess, a tendency which has kept him from recognition as an “important” auteur despite a consistent aesthetic based on exhilarating camerawork (in collaboration with beloved cinematographer Andrzej Jaroszewicz) that swoops and dives like a bat one moment only to penetrate a bedroom with the tightest, most controlled zoom the next. Although he has worked in a wild array of genres over the past forty years (including: science fiction, political thriller, period drama) his films are best defined by his unfettered hand than any conventional categorization. Watching a Zulawski film feels like experiencing a demented alternate-dimension circus. They’re insane, overwrought, extravagant and shatter the ideas of society that govern our world, yet you’ll never want to escape despite the ceaseless anxiety and terrIt is not only the regular physical violence that helps to create this otherworldly disorientation, but the emotional violence of his characters’ near constant screaming, crying, convulsing, and fucking all of which stand in as means of communication. I was surprised by – and profoundly unprepared for – the exhaustion that comes from immersion in an exquisitely excruciating realm of heightened emotion and little discernible logic, a world in which each character behaves as if a psychotic revolving planet that might collide into another at random. A world where nothing is normal but nothing would be considered abnormal, where love is inherently violent and violence is usually the ultimate act of love. Zulawski’s films are baffling, maddening, relentless, ridiculous. They are also among the most fascinating, compelling, and outright beautiful I have ever seen. Each one carefully toes the line between beauty and grotesquerie; blood smeared slowly across the mouth like lipstick, emotions expressed through alarming spasms of pain and seizures of pleasure, deliberate staging constantly giving way to unbridled chaos.

Despite their insane-o elements, Zulawski’s films aren’t just gonzo for the sake of shock value; swirling savagely are ideas of love and relationships, fear and evil, war, politics, religion, desire, identity, art, cinema. By nearly divorcing emotion from circumstance, or at least warping the connection, Zulawski achieves a heightened poignancy; passions feel more real, because we are not given the relief of knowing they will disappear when a situation that has caused them is resolved. That there are moments of recognition, kernels of truth in this crazy world he has created, that it all can’t just be dismissed as a dream both enthralling and repellent but ultimately fantasy, is perhaps their most disturbing quality of all.

At the climax of La Femme Publique one of the characters, a Polish filmmaker living in Paris and thus a stand-in for the director himself, exclaims that one must ‘do’ cinema because “cinema is like bubbles of light in an ocean so dark.” In Zulawski’s case those bubbles must also shine darkly, like a slimy oil spill or the bloody glistening of viscera, illuminated by the lurid and raw as much as beauty and art.

Below is a selection of the Zulawski films on offer at BAM that are best suited for the genre film fan, though each and every one includes elements of genre filmmaking, be it absurdist construction or kinky sex befitting the trashiest of B-movies.

If you are not in the New York area, or one of the lucky cities the show will travel to throughout 2012, several of Zulawski’s films are available on DVD.

THE THIRD PART OF THE NIGHT (Trzecia czesc nocy, 1971)

While the plot reads like retro science fiction – a Polish man survives the Nazi occupation by serving as a feeder for bloodsucking lice which harbor a vaccine – Zulawski’s feature debut is actually based on the WWII memoirs of his father. In addition to the war-time resistance intrigue and solid body horror, The Third Part of the Night is also a kind of Hitchcockian psychological thriller with the hero spiraling out of control after encountering the doppelgänger of his dead wife, and wondering if the lice are sucking away his sanity.

Possession is the most widely screened of Zulawski’s films here in the US, undoubtedly because it is the only one written in English, and the unexpectedly creepy onscreen presence of an early 1980s Sam Neill. His painfully crumbling relationship with his wife (Isabelle Adjani) begins with heated arguments and accusations but quickly devolves into mutual abuse, flung food and broken glass, one of the best examples of Zulawski’s ability to push the mundane believably into the exaggeratedly absurd. Eventually their psychic pain manifests itself as a gooey, terrifying monster (designed by Carlos Rambaldi of Alien fame).

A typically loose adaptation of Dostoevsky’s The Idiot (the author was a favorite of Zulawski’s, and the writer’s work also informs the film La Femme Publique) follows a Hungarian immigrant’s induction into to a gang of Parisian hooligans. Perhaps the most frenetic of Zulawski’s films, the camera never stops moving, capturing fist fights, car chases, and rampant flame thrower use – which must have been painstakingly choreographed to appear so effortlessly chaotic – in an explosive riot of color. The neon signs, hot pink getaway cars, the silk-clad gangsters – it feels like Dick Tracy meets A Clockwork Orange with a dash of West Side Story.

The most purely sci-fi of Zulawski’s films, based on a turn-of-the-century trilogy written by the filmmaker’s grandfather Jerzy Zulawski (eat your heart out, John Carter), follows an astronaut colony on the dark side of the moon as they go Lord of the Flies. On the Silver Globe was shot in 1977, but Polish authorities confiscated the original footage and exiled its filmmaker. When Zulawski recovered the footage he pieced the film back together with narration, resulting in a disjointed, trippy adventure with an unexpectedly thoughtful core.

Zulawski tackles the occult in this film about an anthropology professor who develops two concurrent interests; a strange and mysterious girl he meets at the train station and with whom he immediately enjoys a depraved night of sex, and a 3,000 year old mummified body of a Shaman. As he goes to greater and greater lengths to learn more about the Shaman, so does he fall headlong into an obsessive relationship with his bizarre, cat-food consuming lover. Bleak and unnerving, with a dark palette and hysterical (occasionally in both senses of the word) performances, Szamanka ramps up into a truly spectacular finale.