THE MANY INTERVIEW FACES OF QUENTIN TARANTINO 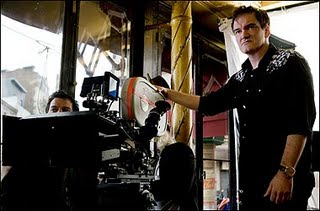 I’ll be the first to admit that I didn’t expect Inglourious Basterds to be as big a hit as it is when we selected it for Filmmaker‘s cover. I love the movie, but I thought it’s more idiosyncratic qualities would take it out of mainstream orbit. I’m really happy to be wrong. And while credit gets passed around to the Weinsteins, the publicists, etc., Tarantino should take some himself. He defied the pundits who opined that he had to cut a half hour or so out of the film after Cannes (the current cut is actually one minute longer), refusing to alter his vision, but then, and this is important, he went out there and defended his vision to every possible outlet. He’s been everywhere, goofing it up on Conan last night but then giving an uncommonly thoughtful and introspective interview to Charlie Rose last week. Check out the end of this interview with Rose for a great anecdote about attending the Sundance Labs with Reservoir Dogs and how Tarantino learned not to look for subtext in his scripts but to just simply trust that it is there. (And, of course, check out my interview with Tarantino on the newsstands or by picking up a digital subscription.)

Over the next few days I’ll try to post a few out-takes from my interview with Tarantino. Here’s one in which he elaborated on his penchant for writing scenes that then become a character’s backstory.

If I wrote a scene about Aldo [Ray, Brad Pitt’s character], about how he got his rope burn — al right, so I could write that scene, I could do the whole thing. I could write a sequence. I could write a 20-page scene. I didn’t, but I could — and I definitely did stuff like that all the time for Kill Bill. [laughs] I could write that. And whether or not I use it in the movie, that happened as far as I’m concerned. That’s his history, that makes me know him more. Now, it’s not just an idea, what happened to him, I know the whole scenario. I wrote the scene, I know the dialogue that happened. And sometimes maybe I show the actors that. Sometimes I don’t. Sometimes I just tell them.