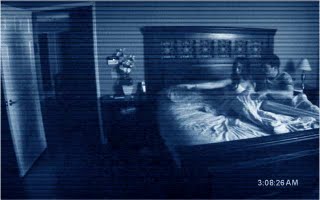 Congratulations to 2008 Filmmaker 25 New Face writer/director Oren Peli, whose Paranormal Activity is not only a fantastic, genuinely scary independent horror film but now also the poster child for successful studio release experimentation. Quick recap: Peli’s film, shot with a three-person crew in seven days was bought by Dreamworks at Slamdance, 2008. Rumors were that the studio would shelve the film in favor of a remake, but there was always one problem: like The Blair Witch Project, Paranormal Activity depends on a feeling of casual verisimilitude. Throw in a name actor and that’s blown, and beef up the production values and suddenly the essential shot-on-a-handy-cam conceit becomes laughable.

Fortunately, as Nikki Finke notes at Deadline Hollywood Daily, test screenings convinced then-Dreamwork studio home Paramount to try a theatrical release. In a welcome rejection of Hollywood marketing bloat, Paramount embraced a grass-roots and internet-based strategy, screening the film only at midnights in college towns. Success in these markets prompted the studio to add more screens, including L.A.’s Arclight, and this weekend the film grossed $500,000 on 33 screens playing only after midnight. Next weekend the film platforms to 100 screens with regular six and seven shows a day schedules. It’s great to see an original independent film do well in the marketplace, but it’s equally gratifying that an unconventional, low-cost release strategy can be embraced by a studio and then pay off.