THE CINE INSTITUTE COVERS THE CRISIS IN HAITI 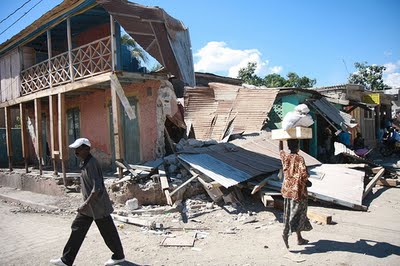 Recently in Filmmaker Melissa Silvestri wrote about the Cine Institute in Haiti in this short report:

India has Bollywood, and Nigeria has Nollywood, two examples of international film industries that have thrived outside of Hollywood, and soon, perhaps, Haiti can be added to that list. In the port city of Jacmel, considered the cultural capital of Haiti and home to many writers, painters and poets, is the Ciné Institute, which is steadily instilling film schools in the country’s young film students.

The school had its origins as a film festival in 2004. The Festival Film Jacmel, founded by filmmaker David Belle and artist Patrick Boucard, showed international films annually for free to thousands of Haitians. After three years, the festival’s popularity spurred interest in further developing Haiti’s own film industry, and a school called the Ciné Institute was started, where young students could learn technical and creative skills involved in filmmaking, and then use these skills to earn a living, support their families, and drive local economic growth.

With a donation by Francis Ford Coppola and Paul Haggis on the advisory board, the school has imported many teachers, including screenwriter, director, journalist and editor Annie Nocenti, who teaches short filmmaking, to work with the students. After visiting Belle in Haiti, Nocenti was invited to the Cine Institute a year and a half ago. “He brought all these movies to Haiti, as many people would have only seen a few movies in their lifetime, and his dream was to put cameras in the hands of Haitians so they could tell the stories they want to tell,” she says. “People have this portrait of Haiti that it is all slums, and it’s not true. I was one of the first teachers, in screenwriting, but I’m just one of many. David has been the driving force of the whole thing.”

In the past year, Nocenti’s students have completed six short films, premiered four this past June, and this September she will return to teach the current students feature screenwriting as well as short filmmaking to the 25 new fall arrivals. Of her experiences with her students, she says she tries to build trust with young people who may be naturally shy towards newcomers but enthusiastic about developing their filmmaking skills. If the Cine Institute’s project is a success, the future of Haitian film could be promising. Nocenti agrees: “Well my hope for it as a filmmaker and journalist is what looks to be a new birth of cinema, a new language.”

Now, the students of the Cine Institute are using their cameras to document the damage wrought by the earthquake in their town of Jacmel. Embedded below is a report from Fritzner Simeus.

Report from student: Fritzner Simeus from Jacmel from Ciné Institute on Vimeo.

At Salon.com, Andrew O’Hehir talks to Nocenti about the role of her students in this crisis. An except:

This week, plans for the development of Haitian auteur cinema abruptly went on hold. None of Nocenti’s film students was killed or severely injured in the quake, but the Ciné Institute building was seriously damaged. After literally digging their cameras and equipment from the rubble, Nocenti says, the students put five crews on the streets in and around Jacmel, a picturesque city of 40,000 on the southeastern coast that is known as an artistic and artisanal center.

Belle, the film school’s founder and director, has made his way from New York through Santo Domingo to Port-au-Prince, the Haitian capital, in recent days. He spent his first night there sleeping in a hotel parking lot. His first-person report on the appalling conditions in that city is available on the institute’s Web site.

“Huge state-owned caterpillar tractors and dump trucks were just beginning to arrive and load bodies as we passed through [Port-au-Prince],” Belle writes. “In the worst parts — every 50 feet or so — there were groups of 10 to 15 bodies lined side by side or stacked together. In between these stacks and groupings is a continual line of singles and doubles — one body after another. The odor is overwhelming. No one sleeps indoors and so roads are also partially blocked with families who have moved their beds to the street.” Among the known dead, Belle says, is the assistant director of his film “Madame Ti Zo.”

From New York, Nocenti is trying to get filmmaking supplies into Jacmel, and to coordinate uploading her students’ video to the Internet and translating the narration from Creole and/or French to English. She emphasizes that the current mission is not merely to capture the devastation, but to document the recovery process and the resilient spirit of the Haitian people.

“We don’t just want to see stories of poverty and chaos coming out of Haiti,” she says. “We want to see positive stories too — and the story of our students and what they have accomplished is a positive story. Haiti is a beautiful country, a land of culture, music, art and agriculture. I worry sometimes that if people think it’s all despair, they will throw up their hands and think that nothing can be done.”

Donations made on the Cine Institute’s home page will go towards earthquake relief in Jacmel and the documentary work of the students. A list of other ways to pledge support to the victims in Haiti can be found on this Google page. Three charities we recommend are the American Red Cross (text “Haiti” to 90999 to give $10), Wyclef Jean’s Yele organization, and Doctors Without Borders.