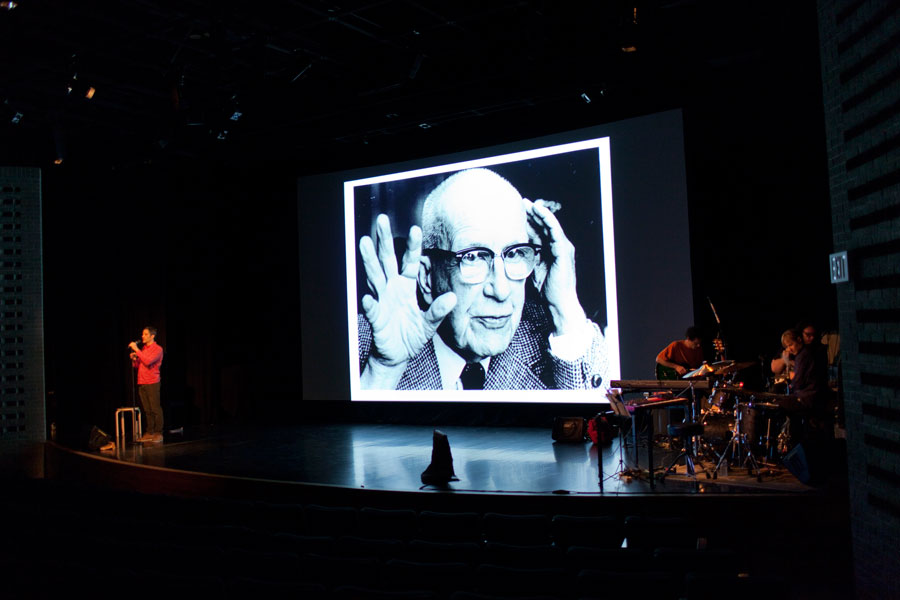 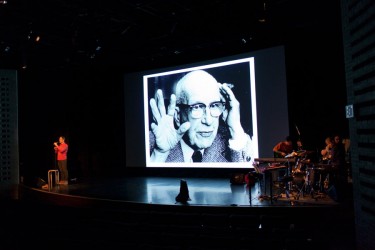 One of the highlights of the 2012 San Francisco International Film Festival, which boasted a great lineup of films and filmmakers, was the new “live documentary” by Sam Green, The Love Song of R. Buckminster Fuller, featuring Green and Yo La Tengo live on stage. The notion of the live documentary is exciting as a new film movement, a far more powerful one than the overrated reemergence of 3-D.

As part of their Buckminster Fuller exhibit, SFMOMA commissioned Green to create a live documentary on Fuller in the spirit of the filmmaker’s previous work Utopia in Four Movements. Fuller is most well known as the designer of the geodesic dome for use as an event space or home for individuals. However, Green uses this project to delve into Fuller’s life; he was a unique man who believed that wars over natural resources were unnecessary, and he promoted the idea that all human beings could be provided for with very simple means.

To create the visual and spoken narrative of the piece, Green utilized the Fuller archive at Stanford — The Dymaxion Chronofile — a stunning collection of notes, schedules, letters he wrote and received, blueprints, stills, film, and TV footage that Fuller (1895-1983) collected throughout his life “as an architect, lecturer, mathematician, writer, inventor, and social critic,” to borrow a description from Stanford’s introduction. You can imagine Green as that guy walking in the warehouse at the end of Citizen Kane. You may not find Rosebud, but you love looking for it.

The result is a balanced and fascinating hour-long exploration of Fuller’s life and work. I couldn’t stop thinking about the intersection between Fuller’s intelligent and straightforward nature, and his role as an “exchanger of ideas.” Anyone familiar or unfamiliar with Fuller will be lucky to experience his life’s work through the enthralling interpretation by Green and Yo La Tengo.

Green is the front man, narrating the entire night live with a microphone and no notes. He doesn’t just lecture, but interacts with the still photography, injecting his own personality into the unfolding tale. You feel like you are talking with Sam, rather than being lectured to. During one scene, Green said, “Holy shit,” right at a point when that was what I was thinking. In another part of the performance, onscreen was a photo of the famous car Fuller invented – a slightly fuzzy, wide shot of people looking at it. Green said: “This car was so popular and important to culture – look at this crowd. That’s Diego Rivera there in the front.” Next shot was the photo zoomed in. “It is him – look at the tie.”

Green also worked hard to flesh out Fuller’s connections to San Francisco, something he plans to do in each city they perform the piece. (There are talks for a modest U.S. tour of the show.) Fuller never lived in San Francisco, but designed plans for a giant pyramid-shaped apartment building (over Alcatraz!) and had amaaaaazing discussions with hippies caught in a beautiful old TV doc.

All parties involved in this performance have a certain pedigree (Green was nominated for an Academy Award for The Weather Underground; Fuller invented a way to live, both physically and philosophically; Yo La Tengo is a bigtime band with great records and cult-like fans), but here it was a true collaboration. Yo La Tengo worked with Green to compose original music for the show that enhanced the performance. Although on stage, it was far from a one-sided concert. Everything worked together so you forgot about the individual parts. Their luscious soundtrack added to the film clips. The opening, featuring old news footage of Fuller, a dome and a helicopter, became magical. Footage of test drives of the car Fuller invented became energetic and playful with the music, sounding like the spirit of Raymond Scott entered the band.

After the show, the crowd kicked around lots of talk about the connections to their love of elementary school teachers. The show was a poem of sorts, about an important man, presented with the showmanship and style worthy of a legendary story, shiny things, and finger painting. I left feeling the same enthusiasm for learning that you have as a child.