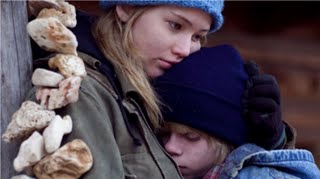 Announced moments ago, the Sundance Film Festival awards were given out in Park City. The dramatic Grand Jury prize went to Debra Granik‘s Winter’s Bone (pictured), which was picked up by Roadside Attractions earlier in the day. Sebastian Junger and Tim Hetherington‘s look at a platoon stationed in Afghanistan, Restrepo, won the Grand Jury doc prize.

Josh Radnor‘s relationship dramedy happythankyoumoreplease took the dramatic audience award, and Davis Guggenheim‘s Waiting For Superman, which was the first big acquisition of the fest, won the documentary audience award.

And winning the first ever best of the NEXT films was Todd Barnes & Brad Barnes‘s Homewrecker.

Read our full coverage from this year fest.

The Best of NEXT:
Homewrecker, co-directors Todd Barnes & Brad Barnes