I’m Previewing My Film i hate myself :) Online. Here’s Why. 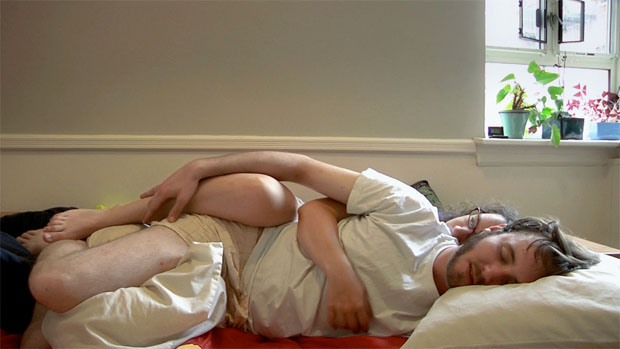 by Joanna Arnow
in Distribution, Filmmaking
on Nov 4, 2013

i hate myself :), Joanna Arnow, No Budge

After I premiered my personal documentary feature i hate myself :) at Rooftop Films this summer, filmmaker Kentucker Audley kindly invited me to show the film on his online screening venue, NoBudge. I hesitated, though. I’m still taking the film through the festival circuit and working on its release, so I wasn’t sure whether even a one-day online preview would be kosher at this point.

But after spending quite some time on festival regulation research without reaching a decision, I realized I wasn’t admitting to myself the real reason for my hesitation. I was actually nervous about an online screening because the subject matter of my film is extremely personal. i hate myself :) documents my yearlong relationship with racially-charged poet-provocateur James Kepple. The film explores questions about gender and sexuality and follows my experience as I learn to be more open about aspects of my identity that I previously found shameful. It’s a documentary where I expose myself, both figuratively and literally.

By confronting what was uncomfortable in this film, I hoped to encourage others to look at who they are more openly too. I wanted this film to help change our culture of shame and conformity by challenging accepted norms of behavior. But this wasn’t going to happen if I used an ill-defined fear about festival eligibility as an excuse to delay a valuable online screening.

When I thought about it more, it seemed silly to have gone to such lengths to make a bold film only to approach its release in a cautious manner. I wanted the distribution process to reflect the spirit with which I made the film, and to do that I had to be more honest about my fear of putting the film online.

Perhaps my concerns about exposure on the internet are more specific than most, but I do think that the distribution process is nerve-wracking for many independent filmmakers, especially for the ones whose films have not easily found their way on the festival circuit. The digital distribution landscape is evolving so quickly that all the new platforms out there can be daunting. It’s often easier to put off investigating these possibilities and instead lean too heavily on the safer, more passive act of waiting to hear from festivals (sometimes for years!). Citing festival regulations and a far-off VOD release, we avoid exploring digital screening prospects in the present.

As independent filmmakers, it’s important to create our own opportunities at every level of a release. Because online distribution is new, there isn’t yet a clear playbook for digital broadcast dos and don’ts. It took me awhile to figure out whether a one-day preview or a one-week preview would work better for the NoBudge screening, simply because there aren’t enough past case studies to reference. But instead of shying away from this uncertainty, we should lean in (blegh) to it, and embrace the opportunity to make our own rules.

We also need to be proactive about growing our ecosystems as filmmakers, and finding our niche audiences. For me, NoBudge was the right fit for a digital preview because the site is a unique home for independent films that are raw and personal. In addition to aggregating films that often fly under the radar, they also put out a quarterly newsletter and review all works programmed. So this upcoming screening will not only allow i hate myself :) to reach an audience that is a good fit, but it will also give me the chance to connect with a rich artistic community.

By hosting a digital premiere or preview, filmmakers can achieve many of the same ends that would have been accomplished at a physical screening – the event can be a way to gain exposure, reach a wider audience, connect with others in the industry and lay the groundwork for distribution. With no geographical limitations on the event, in some senses the possibilities are greater. I decided to go ahead with my NoBudge screening, I could have the opportunity to invite you all to come check it out, wherever your location. The live-streamed Q&A component also unites the community watching the film and creates an interactive viewing experience that isn’t accomplished by sharing a link alone.

This kind of strong community involvement is not only personally gratifying, but also facilitates opportunities for outreach. Independent filmmakers especially need to support each other because it is hard to effectively retain our audience’s interest through social media if we are only putting out a new feature every couple years. This year’s Independent Film Week Social Capital Panel emphasized that like-minded filmmakers become stronger as a group by bundling their content and growing their audiences based on shared interests. A niche aggregator like NoBudge, then, is particularly helpful to become involved with in today’s independent film landscape.

A lot has been said about the benefits of making some content freely available, especially for filmmakers early in their career. I’ll just add that while I did limit this screening to one day so my later VOD release would still be viable, I believe this screening will ultimately help attract viewers later on. Especially since this is my first feature, it’s important to be generous and expand the film’s community; my hope is that the added exposure will help give the film momentum when we do release it.

Of course, none of this is to diminish the importance of also pursuing festivals. If you’re holding out for a Sundance, Toronto or Tribeca, which requires or encourages World Premiere status for features, a digital broadcast is not viable because of these festivals’ requirements. But if, like me, you have already premiered your film, the remaining festivals that do not require World or U.S. Premiere are often open to features that have been digitally broadcast. Of the 15 festivals where my film submission is pending, including True/False and Slamdance, none had rules that would preclude my film if I screened with NoBudge. Festivals are even more open to shorts that have been online – see this helpful list of eligibility requirements.

More and more, the traditional pyramid of film distribution is being subverted, and it’s important not to assume that a digital broadcast must come last. Not every film has to do a digital screening early on, but filmmakers should think about how they can tailor their distribution strategy to the story they’re telling. Since it’s not a one size fits all process, we need to be open to the vulnerability of exploring uncharted territory.

“Don’t put pictures of yourself having sex on the internet!” is some advice commonly given to people… and I definitely see where they’re coming from, I do. But in making i hate myself :), I tried to articulate things about myself that were the hardest to express in hopes that the end product would be a real and relatable story. Even though I know there are some professional drawbacks to telling that story online, it’s one that is important to me and I don’t want to be half-hearted in telling it. After all, how could I be a champion for being free and unashamed if I was dreading a VOD release down the road?

In part, I decided to have this online preview screening early in the process to face my own fears of the wider digital release. As artists, our works can sometimes scare us especially as we take them out into the world – it is not a sign of weakness to acknowledge this, but rather a necessity if we are to pursue distribution opportunities strategically, in a way not ruled by our fears.

For me, holding this NoBudge screening is a re-affirmation of my commitment to openness, to sharing a work that I’m proud of and to breaking some rules along the way.