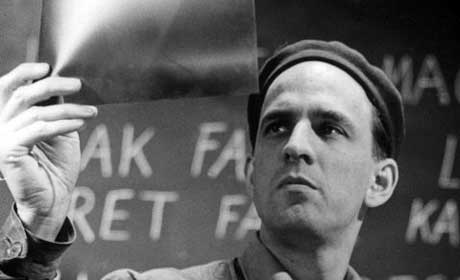 Ingmar Bergman was not known for being a particularly lighthearted or funny fellow, but it turns out he was not always as dark and brooding as his movies may have lead us to believe. As part of the DVD release package of Summer with Monika, the Criterion Collection has included a translated conversation, first published in the Swedish publication Filmnyheter, in which Bergman interviews himself about his movie. And it’s really funny!

You can check out the entire playful dialogue (or should it be monologue?) at the Criterion Current.

I didn’t make Monika. [Source novel author and coscreenwriter Per Anders] Fogelström bred her in me and then, like an elephant, I was pregnant for three years, and last summer she was born with a big ballyhoo. Today, she is a beautiful and naughty child. I hope she will cause an emotional uproar and all sorts of reactions. I shall challenge any indifferent person to a duel!

For most people, a film is a short-lived product, like soap, matches, or polished false teeth. But not for the film director. He lives with his opus (like the devil, he does) until opening night, when he unwillingly surrenders it to the public.

For me it does. A film causes me so many worries and such a lot of reactions that I have to love it in order to get over it and past it.

There are also sensible directors.

Of course, sir. I have heard of several such individuals who are both wise and reasonable and who also behave almost like decent people, even when making a film.

And you despise them?

I don’t envy them. They have a tougher time than those of us who have lost or have never owned a pair of decency’s long underwear or the gold-rimmed glasses of critical reason or the rustling starched shirt of wise afterthought.