Opening this year’s Rotterdam International Film Festival is Michael Imperioli’s directorial debut, The Hungry Ghosts, a gripping look at five New Yorkers all struggling to satisfy their physical and spiritual needs while facing down their own – and society’s – flaws. 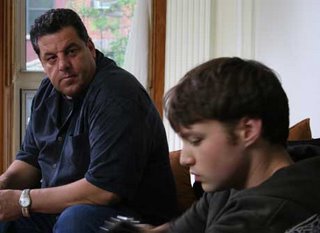 Best known for his Emmy-winning portrayal of Christopher on The Sopranos, Imperioli has over the course of his 20-year career worked with such top directors as Martin Scorsese and Spike Lee. He’s also built a sub-career as a screenwriter, having penned numerous episodes of The Sopranos and Lee’s Summer of Sam, which originally Imperioli was going to direct. For The Hungry Ghosts, the title of which comes from a Buddhist metaphor for people futilely attempting to fulfill their insatiable appetites, he makes a film small in stature (shot on HD Cam and budgeted at $600,000) but large in ideas about life and the human condition. There’s also a strong ensemble of talent that Imperioli brought to the production from family, actors of Studio Dante (Imperioli and his wife’s Lower Manhattan theater group) and friends, particularly Steve Schirripa (best known as Bobby Bacala on The Sopranos), who gives a remarkable performance as a gambling, drug addicted overnight DJ and lousy father who attempts to reconnect with his son after a life-changing event. The Hungry Ghost is an impressive debut film that offers an uncompromising look at the complexities of life and the redemptive qualities we need to get through it.

Imperioli talked to Filmmaker over the phone hours before catching a flight for Holland for the film’s premiere. 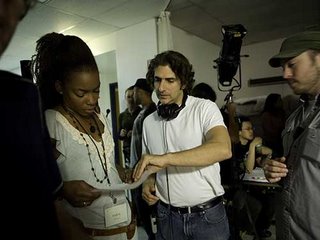 FILMMAKER: Have you always been interested in Eastern thinking?

IMPERIOLI: It is something that has interested me for a long time. Their philosophy is something that I’ve been reading about for a number of years, and you start to examine your own life in terms of those ideas. The title didn’t come until the first draft was almost done, I wasn’t even totally sure that that was the direction it was going to go in, I was just writing from a sketch of the Frank and Nadia characters and it just kind of blossomed from there.

FILMMAKER: In our Summer ’08 In Focus column you told Mary Glucksman that you’d been playing around with two characters for a couple of years. These were the characters?

IMPERIOLI: Yeah. I had the Frank character as the host of a children’s TV show for another script that didn’t really go anywhere, and there was something about the character that I liked and something about Steve playing the character that I liked. I started writing the script using that character and then I had this idea of Nadia, played by Aunjanue Ellis, and the two of them together on a train. That was the initial seed of the script for The Hungry Ghosts.

FILMMAKER: Had you always had Steve in mind to play the part?

IMPERIOLI: Well, Steve and I are good friends. We met on The Sopranos but we became very, very close and one of the episodes that I wrote for The Sopranos was when his wife dies in a car accident. He did some stuff in that episode that really showed a lot more depth than he was allowed to show before. Then just knowing him as a person, knowing the depth of him as a person I thought it would be great to give him something really meaty like this. I knew he would be great but he really surpassed my hopes. His instincts were amazing.

FILMMAKER: Are you interested in seeing how audiences will react to that character? He’s a jerk for most of the movie and at the end people may want to see him get what’s coming to him, but you didn’t go that route.

IMPERIOLI: Well, what I’m hoping is that people give him an opportunity to maybe now change, because where he ends up in the movie is very different than where he begins. Obviously the step in the right direction is that he hears his kid tried to kill himself, and he gets on a train to try to be with him. I’m not saying he’s going to become a guy who meditates all the time or starts to head towards Eastern spirituality, but at the end of the movie he is at a different place. What I would hope people get is that there is always hope no matter how ingrained you think your habits, addictions, ignorances and selfish behaviors are, that there is an opportunity to change. Hopefully it’s not at a point where it is too late.

FILMMAKER: How did the multiple character structure come together?

IMPERIOLI: I did a movie, I shot it about two years ago and it came out last year in Europe. It’s called The Lovebirds, and a guy named Bruno De Almeida, someone I’d worked with before, directed it. It was about six separate stories but there was something in the way that he told those stories that I really loved. We did a screening in New York right before I sat down to write The Hungry Ghosts, and I liked the way he told the story. I thought it could work for these characters.

FILMMAKER: How did you work with the actors, especially the ones from your Studio Dante theater?

IMPERIOLI: I think 18 or 19 of those actors in the film worked in the theater either in main stage productions or as acting students in our classes there. So I knew them and worked with most of them. Nick Sandow, Sharon [Angela] and Steve I’d worked with a lot before on many different things so that already gave me kind of a leg up. We did a pretty extensive rehearsal process — about two weeks every day we worked on the big scenes, and there were some [script] revisions that came out of that. It saved us a lot of time because when you’re shooting independently time is of the essence. They had already found their groove when they got to the set.

FILMMAKER: I’ve read that a big influence on you has been John Cassavetes.

IMPERIOLI: He’s been an influence on me, I really love his writing — I find him really underrated as a writer. A lot of people thought his movies were improvisations. I know people who worked with him — actually Zohra Lampert, who plays the Guru in my film, played Ben Gazzara’s wife in Opening Night. His stuff was scripted tightly, they rehearsed and maybe tweaked stuff in rehearsal but he was able to write in ways that he didn’t give everything away. He let the audience work and let them think. There’s something very organic about his writing that really inspires me. It definitely inspired me, but I don’t know if that’s evident when watching it.

FILMMAKER: There is a lot of deep thinking in the film about the human condition. Was it therapeutic for you to get these thoughts on paper?

IMPERIOLI: Yeah. I would say it was. And more so in actually filming it, not just the writing, but also the filming and working on it [with the actors].

FILMMAKER: I know you wrote Summer of Sam and had the opportunity to direct that, and you’ve written episodes of The Sopranos, so how did you directing not come sooner?

IMPERIOLI: I wanted to direct Summer of Sam and Spike originally came on as an executive producer to help me direct it, but I never had the opportunity because we couldn’t raise the money to do it, which is probably a really good thing because I think it was beyond me at the time. We didn’t have the money so we kept rewriting it and then the scope of the movie kept getting bigger and it kind of encompassed more of the city and the riots and all of the stuff that’s going on. I kind of backed away because I really felt it was biting off more than I could chew. Then it kind of died for a while and Spike [came back to it]. And then I co-wrote a script for Peter Falk and he wanted to do it but we never got the money for that, so that’s just sitting in a drawer. That one I wanted to direct. I’ve been offered independents to direct over the years but I always felt that if I was going to direct something I wanted it to be something that I wrote.

FILMMAKER: And they never offered you to direct episodes of The Sopranos?

IMPERIOLI: No, for the same reasons. Directing television you really have to do what’s been laid out. There’s a template for that show and then you can add your own style, but I just didn’t have the chops to do that. That’s why I wanted to wait [until I had] my material and could make my own style on my own terms or mess up my own thing.

FILMMAKER: Did you ever have to consider starring in The Hungry Ghosts to find the money you’d need to make it?

IMPERIOLI: I got the money really, really easily. There were three investors, and the two major investors were my two biggest donors to my theater so they had been with us for five years. They really love what we do there and said if we were going to do a film to ask them. I wrote the script and asked them and they both wrote big checks.

FILMMAKER: And you never thought of starring in it?

IMPERIOLI: No. I didn’t want to direct my first movie and star in it.

FILMMAKER: Where are you in your career now? Do you want to produce plays and direct films more than act?

IMPERIOLI: I want to do all of the above. I’m shooting [ABC’s] Life on Mars so I work a lot right now, but as soon as I’m done with that in March I’m going to start writing again. It’s really hard to write unless you have the discipline that everyday you’re going to do it and get into that rhythm. So the next free time I have I’m going to work on another script.

Read our coverage of this year’s Rotterdam Film Festival on the blog.