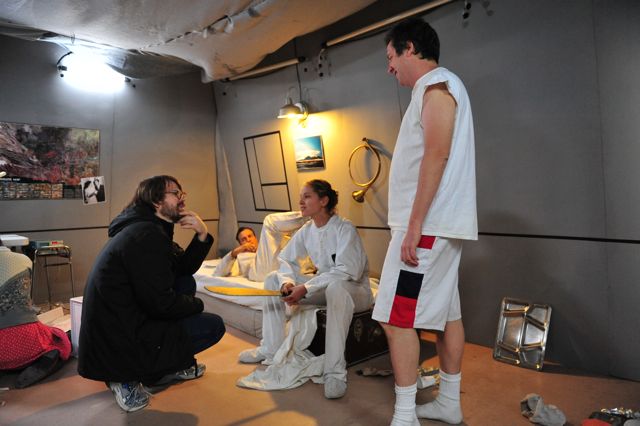 The Sundance June Directors Lab is underway, and blogging here at Filmmaker from the Sundance Resort in Utah will be two of the Lab’s filmmakers. Here is Carson Mell, attending with his dark comedy, Ajax, about “a band of alcoholic astronauts and a young woman adrift in outer space [who] become at odds with one another after discovering the purpose of their mysterious mission.” Read part one of his series here.

The Sundance Directors Lab is over now, and I’m starting the Screenwriters Lab again in a couple of days. Out of the last 17 days, we’ve only had two days when we weren’t rehearsing, shooting, or editing. I’m exhausted, currently re-editing one of the four scenes I shot, but still wish that there was more.

My main goal up here has been finding a way to incorporate improvisation into my work, and at what stages in the process to do so, and I was able to try several different approaches.

The first scene I shot was seven pages, and I used the two days of rehearsal with Ross Partridge and Steve Little to rewrite the scene, incorporating a lot of the jokes they were coming up with on the spot. Because the scene was very intense, I didn’t want to focus at all on getting the dialogue clean (without overlap) and while this made it challenging in the editing room, my editor Jen Lilly and I found our way to a fun, frantic version of the scene, even incorporating a little Townes Van Zandt as the soundtrack. On the first day of shooting I instantly understood the role of the advisors on set when I had asked a question regarding lenses and d.p. Caleb Deschanel stepped out from the shadows with an answer.

The second scene was similar to the first, a rant from Steve Little’s character, a quick fight, only with the addition of a third actor, Margarita Levieva. She got along great with Steve and Ross and instantly added her positive energy to the set. Advisor Azazel Jacobs spent the most time with me working on this scene, and proved a great asset with his advice on working with actors.

The third scene I shot from my script proved the most challenging and rewarding for me. It was a simple sort of “boy rejects girl,” scene, and the more I rehearsed it with the actors the more canned the dialogue felt to me. I thought, ‘Man, I really don’t want to shoot the scene like this’ and was trying to figure out a way not to. While figuring out the blocking, I decided that one character would be drawing, and when I decided he’d be drawing a cat rock band, “The Cats,” I started to get excited about the scene again. That night at the Owl Bar (the resort bar where all Lab participants congregate every night) I decided to throw out all the dialogue and replace it with stuff about “The Cats.” I wrote it that night, and on the page, the dialogue was pretty nonsensical, but when we shot it we played it with the same “boy rejects girl” mood from the previous day’s rehearsal, and it went great. We refined the lines a bit while running them, and Ross Partridge came up with the scene’s best joke to cap it all off, which was so good I made a point not to give him credit.

The last scene I did was the most challenging, mainly because I caught a stomach bug during my rehearsal day, and had to quickly rehearse and refine the scene the morning of the shoot. Regardless, my d.p. Ben Kasulke and I threw together a quick shot list and got some of the best coverage we had in any of the scenes.

Now that the Directors Lab is over, I can say without hyperbole that it was one of the most challenging and fun months I’ve ever had. There are too many of my crew, the advisors, and staff to name that made the whole thing the great experience it was.