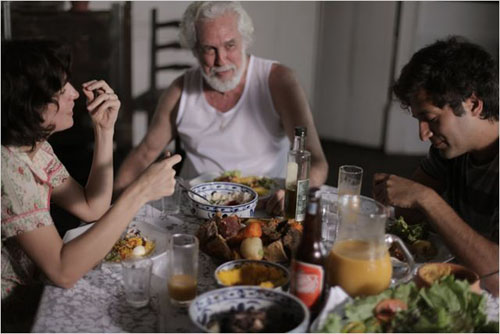 by Michael Nordine
in Festivals & Events, Filmmaking
on Jul 12, 2012 The Los Angeles Film Festival is something of an oddity, not least because of its relative obscurity: for a 11-day-long cinematic event a stone’s throw away from the heart of the American film industry, it hardly registers on the local radar. As a reasonably cinema-savvy Angeleno, I don’t personally know anyone who gets more excited for it than they do for AFI Fest – my usual screening buddies either skipped LAFF entirely or only showed up for a handful of films this time around – though perhaps the comparison isn’t entirely valid. Where this is a “traditional” fest, with programming consisting primarily of pint-size indies yet to play anywhere else, AFI serves mainly as a showcase for the year’s heavy-hitters. (The best films at last year’s AFI – Once Upon a Time in Anatolia, A Separation, The Turin Horse, This is Not a Film and Oslo, August 31st – all made their world premieres at either Cannes or Berlin.) And, as further evidenced by the fact that “independent” was part of its name from 1995 to 2000, LAFF clearly functions differently within the circuit.

There were more than a few hidden gems this year at LAFF, with the emphasis on “hidden.” Chief among these were Dominga Sotomayor’s Thursday Till Sunday, a Chilean road trip/family dissolution drama, and Kleber Mendonça Filho’s Neighboring Sounds (above), an alluringly odd look at a residential community in Recife, Brazil. Sotomayor, a first-time director, manages to be intimate in her portrayal of a little girl watching her parents’ marriage come to an end; the importance she accords to glimpses and gestures makes her film quietly riveting. No less impressive is the way Neighboring Sounds immerses us in its world just as quickly as it’s introduced to us. The camera floats between scenes, locations and characters without ever fully explaining the importance of each — we’re in the room with these people, but in a way that’s detached, almost ghost-like. We’re made to feel as though the walls are thin and that, even when in their own homes, these people can’t help checking the windows or glancing at the security cameras monitoring the street. They’re part of a community, yes, but it’s an uneasy one; everyone’s wary of something or someone. It’s clear that there are lines drawn between them, but neither we nor they know exactly where those lines are or what might happen should one be crossed.

You’d be right to notice a geographic trend here: LAFF 2012’s best, most interesting films all hail from Latin America, whether it be Chile (Thursday Till Sunday), Brazil (Neighboring Sounds), Mexico (The Compass is Carried by the Dead Man), or elsewhere. Whether this is an intentional reflection of the city’s cultural makeup or simply a happy coincidence is difficult to say, but it’s certainly fitting. Ditto the location of the festival itself. Despite the best attempts of the good folks at L.A. Live, the primary home of the festival, to nice it up, the area is still a bit rough around the edges. It’s situated right off the 110 freeway, parking is a nuisance and there are more than a few homeless people wandering about. To be fair, though, all those things are significant parts of the L.A. experience. We take the good with the bad here; there’s an unspoken understanding that, for every palm tree piercing the cloudless blue sky, there’s a guy on Sunset engaged in a knife fight with a foe only he can see. All of which is to say that, whatever LAFF lacks in glitziness, it makes up for in authenticity. Its To Rome with Love and Magic Mike red carpets notwithstanding, this is a festival that makes you dig deep to find worthwhile movies. Czech filmmaker Olmo Omerzu’s 65-minute-long A Night Too Young was one such pleasant surprise, as was Spencer Parsons’ Scooby-Doo-influenced horror comedy Saturday Morning Massacre. You don’t always expect to see a lot of these films picked up for distribution, making their appearance here all the more important. There’s a deceptive humbleness to the programming at LAFF — big things, small packages, and the sense that they’re onto something few other fests have picked up on.

Pocas Pascoal’s All is Well – a film that, while certainly not without its merits, didn’t make much of an impact on me personally – ended up taking the top narrative prize, while Everardo González’s Drought, the documentary I was saddest to have missed, won the nonfiction laurels. The two made their North American and U.S. premieres at LAFF, respectively. In both cases, the festival has helped give a voice to a heretofore unknown film. A quiet voice, perhaps, but a voice nonetheless.