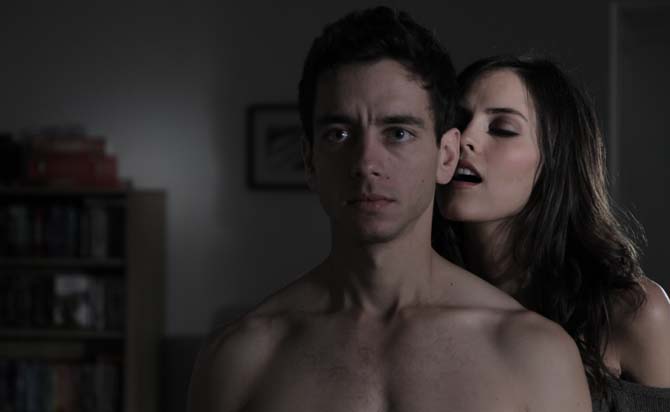 The trailer for Jon Lefkovitz’s micro-budget psychological thriller Engagement caught our eye here at Filmmaker. It’s a Hitchcock-inspired tale about an young groom-to-be and the woman who may or not be the sister of his out-of-town fiancée. The film is currently up on VOD through Film Buff, and below we ask Lefkovitz five questions about making smart genre entertainment for a price.

Filmmaker: Where did the concept of the film come? What were your inspirations?

Lefkovitz: The concept for Engagement is actually semi-autobiographical — in 2009, my then-fiancée (now wife) went away for six weeks, leaving me alone in our apartment. As the loneliness started getting to me, l started to develop several new movie ideas. A friend of mine suggested one such idea, which was to make a film about being alone in my apartment and going crazy. From there, the idea of creating a twin sister for my fiancée who may or not be imaginary grew into a feature-length script, and production commenced in fall 2010.

The main inspiration for the film was my favorite filmmaker Alfred Hitchcock, who perfected the thriller genre and knew a thing or two about making one-location movies (Lifeboat, Rope, and Rear Window being the chief examples). And there’s my favorite film, Vertigo, which is also about a man obsessed with a woman who may or not have an alternate identity. American New Wave films like The Conversation and Roman Polanski’s apartment trilogy inspired me with their deeply personal takes on themes likes obsession, voyeurism, paranoia, and the descent into madness. Finally, I love how directors like Tsai Ming-liang and Béla Tarr use wide shots and long takes to heighten the tension and ambiguity of what’s happening on-screen. I feel like that aesthetic is missing in the American landscape and I wanted to apply it to the thriller genre.

Filmmaker: How did you go about raising the funds and getting the film into production?

Lefkovitz: I raised money through Kickstarter, receiving generous donations from family and friends. The budget was $5,000.

Filmmaker: How did you connect with FilmBuff and what’s been your distribution strategy?

Lefkovitz: Being a micro-budget film that sits somewhere between the extremes of art films and genre cinema made it an uphill battle to get into festivals. Luckily, Steve Beckman (Head of Acquisitions) got his hands on a screener and contacted me; within a few weeks we had a contract signed. The film premiered online and on cable On Demand on June 19th in English-speaking countries all over the world. Our main source of marketing has been through submitting the film to various VOD-friendly websites, word-of-mouth, and social media (Facebook and Twitter).

Filmmaker: You’re working in the established genre of a psychological thriller. What’s the secret to effectively realizing a film in this genre on an independent scale?

Lefkovitz: Keeping the film entirely in one location (our apartment) that we didn’t have to rent or build helped minimize costs, and having only two actors and a skeleton crew didn’t hurt, either. The great thing about psychological thrillers is that you don’t need a lot of special effects to make something disturbing and creepy. You need to be able to read the characters’ inner turmoil in their language and actions, which comes down to the performances and the crew — we were so lucky to have amazing people for both.

Filmmaker: What sort of support do you draw from your community? Are you helped or hindered by being based outside of a production center like New York and L.A.?

Lefkovitz: I’ve lived in Los Angeles for six and half years and have developed a network of people involved in film and theater here. I also feel extremely lucky to have graduated from Northwestern University: the two lead actors, Andrew Perez and Erika Rankin, graduated from NU’s theater school, and almost the entire crew were friends and frequent collaborators from college who are out here, as well.

I feel like I have a unique position being an independent filmmaker in Los Angeles — the films I want to make live somewhere between present-day NYC and 1950s-era Hollywood. Essentially, I’m interested in fusing the DIY model with classical storytelling.