by Nicholas Rombes
in Columns, Filmmaking
on Aug 1, 2012

With just 9 posts to go, I herein and forthwith offer my final confession.

As author of The Blue Velvet Project—which owes a moral debt to the Dogme 95 movement, whose practice of constraint was an inspiration—I feel obligated to make this public statement of confession regarding the rigors of the project. This is done in the spirit of Thomas Vinterberg’s confession regarding his film The Celebration.

In post #143, I confess to knowing well in advance that I would not write much at all about the frame in question. I had been saving the William James quote for months, and used it in post #143 simply to clear it from my desk. 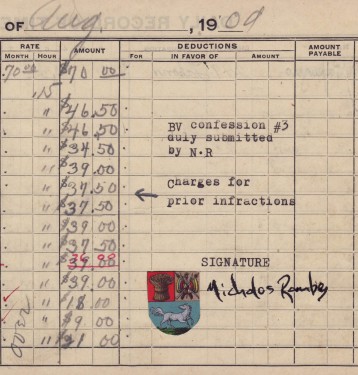 In post #139 I referred once again to the poet Brigit Pegeen Kelly, despite the fact that I had promised Mr. Macaulay that I would refrain from further mentioning her, as he felt—and he was adamant on this point—that she had been “overexposed” in these columns, and that readers had grown “weary” of references to her, and that “certain actions” would be taken were I to persist along “these lines,” actions that would result in “no small uncomfort” to me not unlike the feeling described, in fact, in one of Kelly’s own poems, which, to my surprise, Mr. Macaulay quoted to me (“not the murderous fanfare of the mosquitoes, a visible / derangement, multiplying over the pond’s shallow water,” from the poem “The Sparrow’s Gate” in Kelly’s collection The Orchard), and that he had a duty, “after all,” to take “immediate, unswerving measures” when and if needed, especially because, he said, my head had obviously become “too full of blue,” which I took as a reference to Blue Velvet itself.

In the spirit of preserving the integrity of this project—and to salvage whatever remains of what is, admittedly, nothing more than the most distant, cautious, and exceedingly formal and ritualized relationship with the Editor-in-Chief of Filmmaker Magazine—I hereby vow to endeavor to refrain from mentioning the poet Brigit Pegeen Kelly in the remaining posts, and to restore the Blue Velvet Project (which, according to Mr. Macaulay, “peaked” way back at post #7) to its former glory.

Pleading for absolution, I remain,