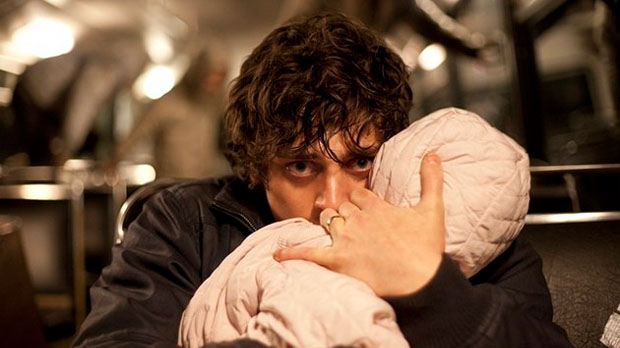 After graduating from the National Film School of Ireland, Dublin-based filmmaker Ciarán Foy plied his trade directing a handful of shorts (including the larkish techno-driven Scumbot, in which a radio-controlled hooligan goes berserk and ultimately turns on his mates), finally winning a bounty of awards for his four-and-a-half-minute malicious-pixie tale The Faeries of Blackheath Woods. Encouraged by the response, Foy set to work in 2007 on a script based on a traumatic personal experience it had taken him years to shake: At age 18, he was randomly assaulted by a gang of toughs near his council flat and viciously threatened with a used hypodermic needle. After the incident, he suffered from acute agoraphobia, a condition he eventually conquered through counseling and lots of emotional support from his future wife, then a fellow college student. All of which provided grist for his debut feature, Citadel, which premiered at the 2012 South by Southwest Film Festival and transmutes these autobiographical details into a Repulsion-esque paranoid fantasy about vulnerability, abuse, and the anxieties of parenting. Only, in this rendering, the demons are real.

In the film, twentysomething Tommy (Aneurin Barnard) is paralyzed by agoraphobia after witnessing three youths in grimy hoodies attack his pregnant wife Joanne (Amy Shiels) with a syringe to the belly, leaving her in a coma. Their baby daughter Elsa survives the attack, but Tommy’s efforts to nurture her—even leaving the house for basic errands provokes near-blinding panic attacks—are hampered by his debilitating psychological condition. (A counselor tells him flatly, with regard to his body language, “Everything about you says victim.”) Joanne’s tween assailants seem to be lurking around his flat too, further terrorizing Tommy, who confides in a hospital nurse, Marie (Wunmi Mosaku), determined to coax him out of his grief and seemingly irrational fears. His jarring encounter with a gruff, faithless priest (Game of Thrones’ James Cosmo) convinced that Tommy’s old tower block is infested with feral, in-bred children who can smell fear initially leaves him puzzled and wary of the old kook. But when Elsa is snatched by the ghoulish delinquents, he agrees to help the priest—accompanied by Danny (Jake Wilson), a blind boy whose aura of fearlessness may protect them—vanquish the lot.

Filmmaker: Is there a meaningful difference between a horror film and a terror film?

Filmmaker: On the basis of Citadel, it seems important to you that these kinds of films have an emotional dimension as well.

Foy: Yeah, you’ve got to care for the main character, to have empathy. The spectacle of CGI is starting to wane a little in that there’s only so many times we can see a city destroyed before we become numb. Ultimately, the pendulum is starting to swing back to story. We miss feeling something when we watch a film, whether it’s terror or awe or wonder. And that has to be crafted. In early Spielberg films like Close Encounters, you felt that sense of wonder. It’s almost entirely based in how much you empathize with the characters. With horror, if you’re invested in the character, you’ll be ten times as scared if they are. And the more real it will feel.

Filmmaker: Why house a worthy story within this particular generic framework—what’s the attraction to horror?

Foy: My favorite films are genre films. But as a first-time feature filmmaker, I knew I’d be dealing with a bag of peanuts to make this film. And you can get a lot of mileage with very little. Initially I wanted to write a dark, bittersweet love letter to who I was at 18 years of age and what it’s like to suffer from agoraphobia and how I viewed the world as a frightened [teenager] – to basically create a Gothic fantasy. I made a short called The Faeries of Blackheath Woods, which really opened the door for me to meet agents and producers who wanted to work with me. I was offered a lot of stuff but I turned it all down because I really felt it was important for me to do this first.

Filmmaker: Was it cathartic to import that personal experience into the film and use it as a model for your principal character?

Foy: More so in the writing than anything else. The shoot was 23 days in the middle of the worst winter that Glasgow has had on record, so it became this completely chaotic, almost military-like mission to get in the can sometimes four or five pages a day. I didn’t really have time on set [to ponder]. It took a lot of time to get Citadel off the ground. I was writing this in 2007 in the middle of the recession and a lot of financiers didn’t want to put money in, and others had to cut their budget. Each time you’d go to a different house, so to speak, they’d want their two cents of input. When you spend every single day bathing your mind in situations and scenarios that you’d rather forget, it’s taxing, to say the least. I was echoing the arc of Tommy, though I didn’t realize it. To be master of your own creation and bring a tangibility to your fears, there’s a great sense of power and ownership in that. So yeah, it was cathartic.

Filmmaker: It was a way of gaining control over how you represented that time to yourself.

Foy: Absolutely. And also, I wanted to create how I saw the world, how I felt every day. The area I grew up in is a working-class estate, but it doesn’t look as bad as it does in the film. At the same time, it feels that way. It feels empty, like there’s nowhere to run, and every corner feels like a threat. When you’ve got such an irrational fear, in many ways you are seeing things in the shadows that aren’t there. I wanted to make the script a subjective experience, I wanted to put [audiences] in the headspace of an agoraphobic. To make a dark gothic fantasy about that [mindset] seemed to honor it more than a straightforward drama would have.

Filmmaker: There’s a sociological aspect to the council-flat settings as well where the feral kids are nested.

Foy: There are a hundred socioeconomic reasons why I was attacked, so to have made a drama about that and said “These are just regular kids” would have been to say something questionable, maybe. I wanted to give myself permission to explore that dark area by creating a creature, so there was a bit of a remove there, obviously. The authenticity of the emotion I wanted to ring true, so it required me to access memories of the attack, and remembering that cold, vacuous feeling of never knowing the reason why. That was one of the scariest things about it – they didn’t take anything, they didn’t want anything. In many ways, it informed my understanding of terror. When you know the reason why something happens, no matter how insane it may be, you can eventually make peace with it. When you don’t, that’s quite literally an embodiment of darkness. Going there on a daily basis and listening to the soundtrack to The Mothman Prophecies by tomandandy, who I never imagined I’d work with – I’d stick that on and get into that headspace – I just felt sorry for my wife.

Filmmaker: Some visual elements in Citadel are freighted with significance. The recurrent image of three tower blocks, for instance, is echoed by the three numeral ones on the couple’s apartment door, #111, as well as the trio of assailants who attack Joanne.

Foy: I became obsessed with threes and trinities—there’s loads of them in the movie. Giving a rhyme to the movie lends a kind of subconscious unity to it all.

Filmmaker: Part of how you found the visual style for this film was an accident arising from the extreme weather you had to deal with.

Foy: Right. Because you’re dealing with agoraphobia, which would prompt you to go wider, you realize very quickly that if you go wider, it takes more lights and art direction. And you’ve got a low budget. So what if we went closer? Aneurin’s got such expressive eyes that it really worked out in terms of thrusting the audience right into his face – you’ve got no option but to feel what he’s feeling. So it was a happy accident.

Filmmaker: Was there a big leap for you between directing shorts like The Faeries of Blackwood Heath and making your first feature?

Foy: With all the shorts I’ve made, there’s always some semblance of “things are not what they seem.” When you’re making a short, you’ve got to jump through all the same hoops that you do making a feature. The only difference, really, is time. With Faeries, we had to find a location, cast the kid, get the costumes made – all the things that you do on a feature. You sprint a short distance in one and you’ve got to run a marathon on the other. The first couple of days on Citadel, I was knocking out 40 slates a day. Then I realized, by day three or four, that I was exhausted. You start to get the right pace after that. At the end of the day it’s about getting the right performance and making sure that it all looks good.