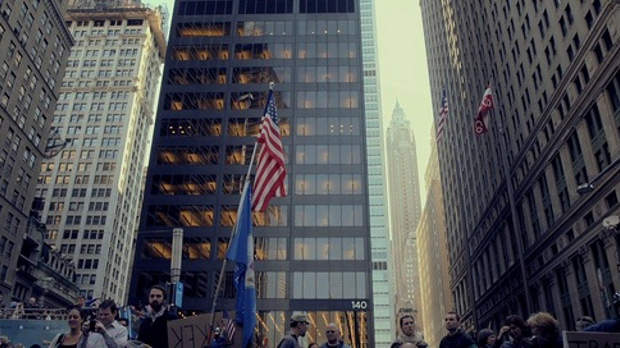 Our film wasn’t planned. As the events of Occupy Wall Street began to unfold, and Audrey [Ewell] and I decided to make a film around it, we basically went from working on other projects (our own follow-up film to Until The Light Takes Us, as well as the paying freelance work that pays our rent) to instantly being in production on an unbudgeted and risky film project that used an untested methodology to bring it to life, and that relied on the abilities and collaboration of people we’d never met. It’s difficult to stop everything you’re doing for 14 months on something that is fundamentally experimental in execution, that you can’t say for sure will even work on the most basic level – of resulting in an actual film.

We sacrificed our time, our money, our sanity and every single day in 2012 (minus nine “off” days – most of which saw us working in some capacity anyway). Audrey worked 100 hour weeks for eight consecutive months, for way less than minimum wage, and our finances have felt the pinch of that. We sacrificed any actual in-person contact with our families and most of our friends for 14 months. Would we do it again? Maybe not. Am I glad we did it this time? Absolutely. But only because it worked. The film’s a real eye-opener for people; it’s not what they expect, and that’s a fun experience, getting to talk to people who’ve seen it, and been affected by it, and who are surprised by it.  We like to upend expectations. And there is very little in this world that compares to those moments of getting to share your work with audiences and having it be appreciated. Or of knowing that it has the power to be part of the dialogue of culture. So yes, the sacrifice was worth it. And no, I don’t think we’ll ever do this particular experiment again.
Sundance Responses 2013