The Other Side of Sundance 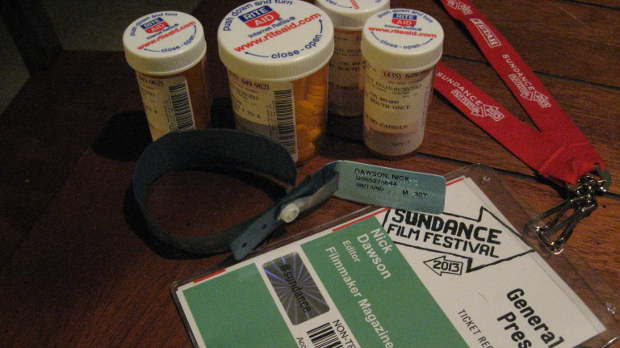 I’m not in the Sundance rhythm yet. I’m still trying to work out out how to fit in enough writing, food and sleep into my jam-packed schedule.

Before arriving, I’d decided I wouldn’t go to too many parties, but on a whim I RSVP’d to a “celebrity poker tournament,” which was to be held at the Everest Mansion, a big house up in the mountains above Park City. My rationale was that I would get to experience “the other side” of Sundance, and could maybe relax and play a little poker. The list of confirmed guests included some famous names, so I assumed that I would be told that there was not room for me on the list. When my attendance was confirmed, I was taken aback, but decided to go anyway.

In addition to some tabloid celebrities, also due to attend were people like James Franco (here with kink and Interior. Leather Bar), C.O.G. actors Denis O’Hare and Jonathan Groff, Jill Soloway (director of the U.S. Dramatic competition title Afternoon Delight), Anthony Mackie (who appears in The Inevitable Death of Mister and Pete) and Darren Aronofsky, who’s on the Sloan jury this year. My plan was to chat with them, get a few quotes – I was particularly excited to get some info on Aronofsky’s forthcoming Noah – and write up an entertaining little piece.

I’ve now learned that it’s a bad idea to plan too much at Sundance; the poker event and the 24 hours following it were a perfect demonstration of how you have to sometimes just embrace the unexpected.

To start with, on my way to the poker tournament I got off at the wrong stop and ended up on a dark, snowy road with no idea where I was in relation to my destination. Fortunately, a very generous driver from one of the local hotels gave me a lift to ski lodge where a shuttle was waiting to take me to Everest Mansion. When I arrived at the mansion, I discovered what I already should have known, which is that I’m not very comfortable at celebrity events. Additionally, there was no sign of any of the “confirmed attendees” I’d been planning to talk to. (Groff did, admittedly, arrive at midnight, just as I was leaving.)

Fortunately, I recognized and introduced myself to Dallas-based actor Andrew Sensenig, who plays The Sampler in Shane Carruth’s Upstream Color, which is on the cover of our Winter 2013 issue. I’m a huge fan of the film – which Sensenig is excellent in – and I had a great time talking to him and his wife Kristi about Carruth’s vision and working methods, David Lowery (who cast Sensenig in his debut feature, St. Nick), and much more.

In the tournament, Sensenig and I were out after an hour or so, but Kristi had a deep run, knocking out the only two celebrities playing, Mekhi Phifer and talk show host Montel Williams. (The Wire actors Michael K. Williams and Felicia Pearson briefly appeared to say hello to Phifer, but did not stay to play.) Ultimately, I didn’t get my Noah scoop or come away with any celebrity poker anecdotes, but talking at length with the Sensenigs was actually a much more enjoyable experience.

The following morning I was due to head to the Eccles for an early screening of Michael Winterbottom and Steve Coogan’s latest collaboration, The Look of Love, a biopic of British sleaze merchant Paul Raymond. I was worried about getting to the Eccles on time, but that concern faded as the day took an unexpected turn. First, I woke up at 7am with pain in my back and abdomen. By 8, I knew I wasn’t going to the Eccles. By 8:40, I realized I needed to go to the E.R., and phoned for a cab.

If I ever needed a demonstration of just how much the festival takes over Park City, I got one now. “I need to go to the emergency room,” I told the woman from the taxi firm. “How soon can someone pick me up?” “Wow, it’s a little tough right now,” she said. “There’s four 9am screenings, so all my guys are booked up. I can get someone to you in 20 minutes at the earliest.” On the street, I found things much the same. When I got a taxi to stop, I asked, “Can you take me to the E.R.?” “I don’t know that venue,” the driver replied. “Where exactly is it?” “No,” I said, “I mean the emergency room.” “Oh, sorry,” he said. “I need to pick someone up on Main Street in two or three minutes.”

Luckily, I found a cab after about 15 minutes, and toughed out the ride to the hospital. I was hoping that I wouldn’t find the kind of overcrowding and understaffing seen in Peter Nicks’ The Waiting Room, and was very fortunate that I was the only person in the Park City Medical Center’s E.R., and was seen immediately.

Three hours later, I was back at the condo with a diagnosis of kidney stones and a wad of prescriptions to take to Rite Aid. I had arrived in Park City having already had the winter flu and with a very slight cough, and so was hopeful that I could avoid being laid low by illness. It was fitting, of course, that I should find another way of getting sick, and suffer through pain that Concussion director Stacie Passon — when I talked to her at the IFP/Filmmaker party the next day — described as “worse than labor.”

By evening, I was medicated enough that I decided to go to a screening of Escape From Tomorrow, the Disney World-set oddity that has taken the festival by storm. (Earlier Scott had told me, “I’d advise you not to go to any movies in your state, but this you have to see.”) Unsurprisingly, given my condition, I arrived an hour earlier than I’d intended, but the buzz around the film was such that I was still not at the head of the line.

In order not to cover already well-trodden ground, I won’t go into detail on my thoughts about the film, but suffice it to say that Escape From Tomorrow was quite an experience, its oddness dovetailing with the sense of dislocation I felt from being on four different kinds of medication. During the latter stages of the film, as the action becomes ever more crazy, I began to get very drowsy, my eyes starting to shut a little, the movie’s wild dream logic blurring with my own slipping consciousness.

Going forward, I’ll be focusing on movies at Sundance; I feel like I’ve had enough experience of the other stuff for now.