The Outlaw Pleasures of Escape from Tomorrow 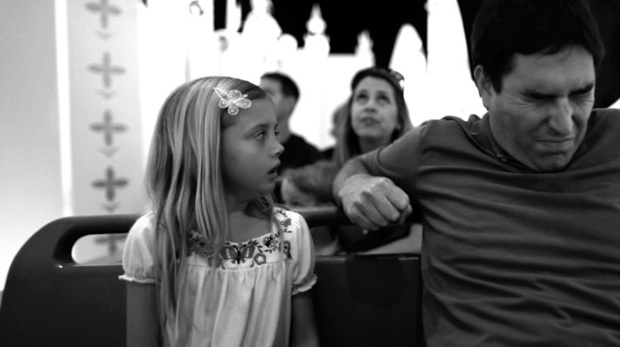 Children have no conception of copyright. The words “intellectual property” mean nothing to them. There is just the world, the people and places and things in front of them, and the imprint these things make on their young minds.

The Walt Disney Corporation has made such a cross-generational feedback loop into an obscenely successful business strategy. Generations return to its theme parks with new generations of children in tow, eager to give them the experience they themselves had as kids. For many of these parents, this experience is a fond and pleasurable one, but for others, there are dissonances. Maybe these are petty — long lines, overpriced tickets and food in this bad economy make these places not like what we remembered. Maybe they are deeper and more troubling, though, as theme park hyperreality warps into something more insidious.

Part of the Walt Disney Corporation’s strategy to maintain its success across generations has been through copyright. Artists may want to explore the origins of their childhood memories by creatively manipulating Disney imagery, but the Walt Disney Corporation has vociferously sought to restrict the use of its iconic figures and to keep them out of the public domain. They are an aggressive litigant in copyright cases, and they were a major lobbyist in the 1998 Copyright Extension Act, which some called “the Mickey Mouse Protection Act,” as it protected the cheerful rodent from public appropriation for another two decades. And all this despite the fact that many of the Walt Disney Corporation’s characters are based on public domain stories.

All of the above is not just fascinating prologue to Randy Moore’s Escape from Tomorrow — easily the most jaw-dropping film I’ve ever seen at a film festival — but part of its content as well. The film is like a bad acid trip version of National Lampoon’s Vacation, but with Wally World substituted by the real thing. At the film’s start, forty-something parent Jim is midway through his vacation at Orlando’s Walt Disney World with his wife and young son and daughter when he gets a phone call. He’s lost his job. Hiding this fact from his wife, who immediately suspects something’s up, he says he just wants to have a good last two days with the family. But soon both Jim and the film become increasingly deranged. He quarrels with his overbearing wife and becomes obsessed with two flirty French teenagers, inappropriately stalking them across the park with his young son by his side. An encounter with a fellow parent leads to bondage sex in her hotel room. Disney princesses are revealed to be high-priced escorts, toxic cat flu infects the park, and, by the end, Disney World is inflected with the sinister menace of Overlook Hotel.

The film becomes more and more entertainingly unstable as it goes on, morphing from one genre to the next, riffing on not just The Shining but A Clockwork Orange, and seeming never to end. It’s got one false finale after another, with each one upping the ante on what came before. Cunningly, this all takes place in an outrageous fantasy world that is clearly the product of Jim’s mind. One can imagine a hidden-camera documentary version of this film critiquing Disney consumerism, but buried within Escape from Tomorrow’s psychosexual B-movie anarchism is something much deeper — a creative reckoning with the complicated and lingering psychic muck of our childhood.

What has made Escape from Tomorrow the talk of Sundance, however, is not just its story but the story of its making. Moore shot this film guerrilla-style, secretly filming his actors without releases from Disney, its performers, or all the park visitors who are included in many shots. And just to be clear — this is no sloppily-made mumblecore improv-fest. Escape from Tomorrow has a large cast, a DP, and assistant directors. It’s even got crane shots (although those were craftily executed, I realized, in a matching location.)

You don’t have to be an expert on copyright and intellectual property to realize the outlaw nature of this project, and it’s that realization that gives this film its added kick. Each scene becomes its own balletic stunt, and it’s thrilling to watch Moore consistently trump Disney park security. But by making a film that, I imagine, will be shut down by the Walt Disney Corporation as soon as this festival concludes, Moore has gone all-in on a project that is clearly the result of personal obsession. “My dad lived in Orlando and my mom in Chicago,” Moore said at the film’s Q&A. “I would fly [to Orlando] once or twice a year as a kid, and we’d go to Disney World. It was a special, physical place, and it became an emotional space. Obviously, I have a lot of father issues that I can’t separate from that place.”

The delicious irony of Escape from Tomorrow is that if it is indeed shut down by Disney, it will become this generation’s Superstar, living on in the imaginations of not only those who have seen it but those who haven’t. Like the Disney characters that grow and mutate in our minds as we grow older, for a certain audience so too will this film’s notion of Disneyland as a psychosexual wonderland, simmering with trauma, bad-parent guilt and the nightmare of not childhood but our own mortality.