Bestiaire – A Hammer to Nail Review 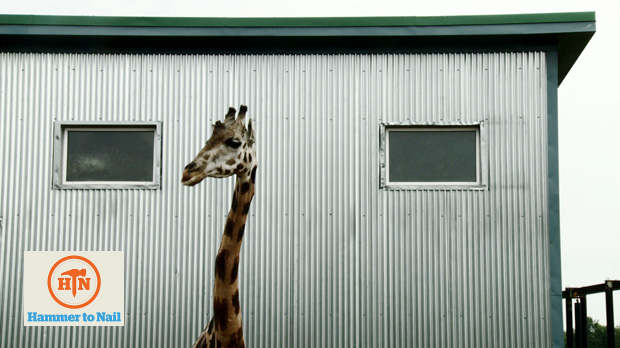 (Bestiaire had its World Premiere at the 2012 Sundance Film Festival. It is being distributed theatrically in America by KimStim and screens in L.A. at the Cinefamily, Feb. 21 – 27, 2013. )

The first animals we see in Bestiaire are humans, observing something with great attention. The scene resolves in a funny anti-climax: it’s revealed that they’re sketching in an art class, and all that intense focus is directed at a small, taxidermied deer. By starting his film looking at the viewer, director Denis Côté suggests that what we’re about to experience will be as much about ourselves and how we take in what we see as about the sounds and images he presents us.

In fact, Côté boldly serves up his imagery with no verbal context. He keeps the camera locked down and his edits to a minimum. Much of Bestiaire is long-take observations of large, confined animals: a placid bull’s breathing lulls you into feeling like you’re communing with a kind of primitive, meditative consciousness; llamas pace elegantly through snow in counterpoint to each other, bringing to mind a Pina Bausch dance piece; horses shift around against a backdrop of corrugated metal, in the lower third of a lovely composition.

Viewers are left to create their own storylines, but certain themes emerge. Confinement inevitably becomes a dramatic focus: as the shots get wider we see that we’re inside a Canadian safari park, a place where there’s some freedom to roam but the animals also spend a lot of time in cages. At times the footage suggests a campy prison drama, like when a close-up of an ostrich — looking like a ‘60s-era showgirl gone wrong — provides some comic relief, or in a shot of a grey-crowned crane strutting and preening in front of a mirror in its chain-link cell. A group of elks (I think) push into an area where they sense they’ll be released, before turning back and staring at the camera — their expression seems to be a combination of pleading and threatening. But it’s a subjective call — maybe I’m anthropomorphizing them; their long faces have a cartoonish quality that reminds me of Mr. Horse from Ren and Stimpy. I’m taken back to the opening scene and Côté’s theme of observing how we observe.

Equally interesting are Côté’s shots of humans that evoke and parallel the animal footage: he captures animal park workers standing perfectly still, their minds seemingly blank, as if spending time around animals has influenced their consciousness.

In the most emotionally intense part of the film, we see zebras, notoriously untamable creatures, raging against their confinement, furiously stomping and kicking and slamming hard and repeatedly into the sheets of metal that surround them. Then there’s a sharply angled shot of a wall of chain link, with tiny monkey hands reaching through it to grab pieces of apple, suggesting children in a concentration camp. These scenes are raw and provocative, but the ethical implications of the animals’ confinement are left up to the viewer. Bestiaire isn’t a film with a political agenda; if I’m feeling moral outrage, it’s largely because of what I project into what I’m seeing.

The film encourages us to think about the complicated ways we relate to animals, without telling us what to think. In an extended sequence halfway through, a dead duck, which starts out as a limp, feathery rag pulled from a dryer, is skillfully stuffed and mounted by a taxidermist. Here, the love of an animal’s form and the desire to keep it excuses that it’s — uh, dead. And for once Côté tips his hand, if only slightly — pointing out an obvious parallel by aiming his camera at pictures of women in lingerie taped to the taxidermist’s wall.

One of the film’s most powerful and defining images is of an enormous hyena, a beast right out of a child’s nightmare, being squeezed into a tight space and poked and gently prodded by a pair of young workers. It’s a shot that defies easy explanation: there’s a subtext of terror, a potential for violence toward the humans or toward the beast — but also a certain sense of caring and trust between them that’s heightened by its contrast with the circumstances.

Generally even the most oblique films can be traced back to a creative big bang of intention. Bestiaire is a radically different work; it’s as if the film took form on its own with the filmmaker mediating it. Provocative, evocative and reflective, it’s ultimately a film that opens up playgrounds for contemplation and self-contemplation rather than putting forth an author’s point of view.