True/False 2013 Dispatch #1: These Birds Walk, The Garden Of Eden, The Machine Which Makes Everything Disappear 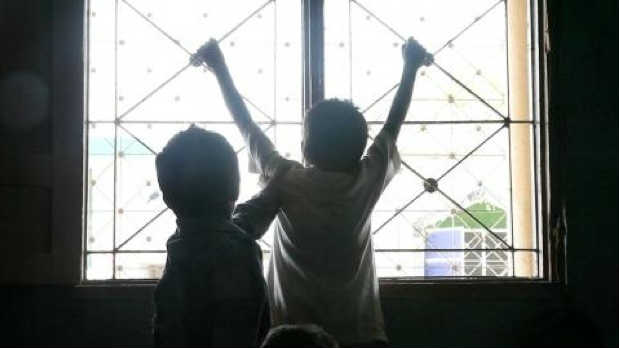 Banner news first: two days into the 10th annual True/False Film Festival, Columbia, Missouri’s immensely likable documentary/hybrid-friendly showcase, the marquee title of the six films I’ve seen so far from the slate (three of which I saw before arriving) is Omar Mullick and Bassam Tariq’s These Birds Walk. The starting point is Abdul Sattar Edhi, a Pakistani humanitarian and founder of a number of shelters, rehab centers and other faculties for the dispossessed. As he washes naked runaway children, some pitifully scrawny, he says his philanthropic reputation and prominence mean nothing; to understand his work you have to understand common people.

Leaving Edhi to bookend the film, Mullick (also the d.p.) and Tariq take him at his word. Their first subject is young boy Omar, introduced in the opening shot running to the sea. The camera shudders to keep up in a parallel pan, then catches up from behind as he punches the sea and spits into it as he walks away to celebrate his momentary violent victory. The furious beach run to nowhere has (deliberate?) shades of The 400 Blows, when young Jean-Pierre Leaud ran exhaustingly to nowhere.

The Edhi Foundation house Omar lives in takes in runaways and strays found by the police. Until and unless they’re returned to their parents, they stay behind bars like bored juvenile convicts, dividing their time between Muslim prayers and fierce fighting. Few films have the guts to look so unflinchingly at young boys moving from already tough hit-me-hard-and-see-if-I-cry competitiveness to brutal, no-joke brawling; this is male aggression at its purest and least mediated. Omar’s tiny but thinks of himself as a warrior-fierce Pashtun (an image associated with Pakistan’s second-largest ethnic group), boasting that if you hit him and more than one tear falls, “I’m not a man’s man.” Attempting to make the claim true, he picks fights; in one extended, hard-to-watch scene, his provocations earn a prolonged, humiliating pinning-down from a much larger boy.

On the adult side, These Birds Walk zeroes in on ambulance driver Asad, who finds relief and distance from his own troubled adolescent past in his work for Edhi, which includes picking up kids from police stations, driving them home, and driving dead bodies wherever they need to go. “It’s easier to transport dead bodies than take these kids home,” he tells a co-worker, and the film bears him out: the shock of seeing a young boy who dreads the resumption of beatings from his parents being greeted by an uncle who says the family “would have been happier if you brought me his corpse” isn’t easily shaken.

These Birds Walk‘s adolescents seem to find genuine solace in their religion; the film captures Islam as a religion of peace. Omar finds stilled refuge in prayer and true catharsis in his running jags. When he’s being driven home, the two combine as he asks to stop at a mosque. He runs up a crowded staircase, and the camera follows him with impossible recklessness and agility, bumping into bellies and ducking under elbows. “What’s with the running?” Asad asks, as if poking fun at the movie itself, then concludes “Never mind, the country is such that everyone runs to a prayer.”

Locating lyricism in poverty and endemic, repetitive cycles of abuse and neglect is a dicey prospect, but Mullick only allows all-out aestheticization occasionally. The running shots, plus inevitably kinetic views from Asad’s ambulance in motion, jolt the material. But sometimes the images are unvarnished immersions in the facility: well-composed but unshowy, focusing on moments of boys bonding, fighting, or outright weeping. Humor is included without seeming like a conspicuous leavening device, and comedy stemming from boy/man boasting about street smarts always has the unnerving potential for bloody closure. It’s more rough than tender but never gratuitous or exploitative, hard to shake, and a fine entry in cinema’s history of tortured male youth doubling — in the trips to return the boys home — as a travelogue of Pakistan’s least hopeful areas.

Ran Tal’s The Garden Of Eden takes Israel’s Sakhne National Park as a starting point for a different national portrait. At the center of the park are its pools, whose surfaces — ready for subtly graded rippling and visual hypnosis — are a natural magnet for any image-crazed director. Tal allows himself a few such studies through the four seasons but focuses on a cross-section of Israeli society and its faultlines, as told through the park’s regulars. In this physically idyllic realm, the vibe starts with warm summer fun: boys talking shit about girls (“I said, ‘You look real good. Why are you dating a Russian? Are you retarded?”), paunchy middle-aged men setting up barbeques, all frolicking under the gaze of watchful lifeguards armed with loud speakers (“Hey there, you sure your son can swim?”). The stories range from personal heartbreak (a man whose wife left him after years of putting up with his lies) to sad or outright tragic narratives directly shaped by Israel’s history. An Arab man talks about an abortive romance with a Russian Jew broken up under his father’s disapproval (“just another failed romance between an Arab man and a Jewish woman”), while a nonagenarian tells of leaving Germany and his parents’ death at Bergen Belsen.

The park’s directors estimate 15% of their patrons are Arabs. During a board meeting, one man says they could get a million visitors a year (rather than a mere 400,000) if the park’s image was more overtly pro-Israeli — evocative of the early days of solidarity, kibbutzes and defiant nation-building — and less welcoming to Arabs. As an allegory about uneasy co-existence and national self-image (or inability to create an accurately inclusive one), The Garden Of Eden is impressively mosaic-ish in its stories but unnervingly opaque when it’s time to synthesize the information. At the climax, Tal cuts from the present-day park to its old newsreel inhabitants. The scene is exactly the same, and so are the ethnic tensions. Is Tal celebrating continuity and perseverance or pointing to perpetually unresolved fractures?

Tinatin Guarchiani’s The Machine Which Makes Everything Disappear has a premise so amorphous it effectively allows the director — making her first official feature after graduating from student auteur status — to do anything she wants. That narrative framework: a casting call for any curious Georgian citizens, aged 15 to 25, who want to be in a movie. (Even the age limit can be discarded if Guarchiani feels like it: at one point, a man in his 40s or 50s shows up to audition, saying there must surely be supporting parts and “even if it is about the youth, adults could be helpful too.”) Guarchiani interviews people in dilapidated, abandoned houses, their backs towards turquoise-peeling walls, facing a director whose off-screen interrogations coax honest answers about their hopes and dreams from articulate subjects. First there’s a man whose biggest dream is for “my kids’ future”; asked to think of a dream for himself, he hesitates then responds, “To go to Hollywood.”

The second subject’s a young boy who talks about living and working on farm fields. “If I come with you, will you show me your life?” Guarchiani asks. With that we’re out of the interview room and off to the first exploratory installment of this cross-section of Georgian life. Guarchiani favors very of-the-moment master shots geared more for durational lull than compositional rigor, and her emotional instincts can be off-putting (a sequence of a teen girl meeting up with her mother, who abandoned her 15 years ago, and breaking down into wracking sobs seems pointlessly unpleasant). The Machine Which Makes Everything Disappear can be as affected as its title and doesn’t take full advantage of the freedoms made possible by its loose premise, but it’s still a worthy attempt at new storytelling forms.