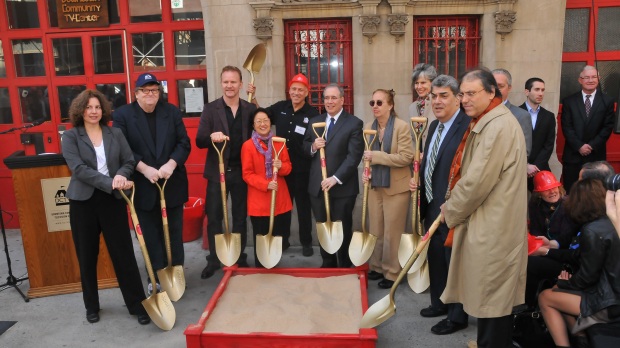 by Stewart Nusbaumer
in Festivals & Events
on May 8, 2013 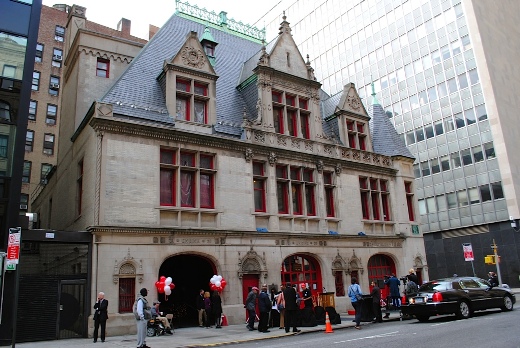 In the background stood DCTV’s home since 1979, a striking structure in French Chateau style with steeply pitched hip roof and prominent corner spiral, which contrasted sharply with the surrounding towers of American boxes. This juxtaposition contributed a bit of the surreal to the ceremony. But only a bit. This was not the 16th century, and certainly not the tranquil Loire Valley in France. The honking horns and growling trucks, darting taxis, the screeching and banging from a construction site across Lafayette Street all insisted this was the 21st century in chaotic New York City.

“Documentary films are the eyes and ears and soul of filmmaking,” the DCTV (Downtown Community TV) co-director continued. “New York is the worldwide capital of documentary filmmaking.”

The ceremony on the sidewalk in front of  the “chateau,” built in 1896 as a New York firehouse, was for the construction of a new documentary-only theater in New York City. The 73-seat Academy Awards eligible facility will be on the ground floor where firetrucks once parked. The facility is to be completed in early 2015 with state-of-the-art projection and sound systems. With the crashing of TV news and long-form journalism, you might say that the space will again be used as a resource to put out fires. 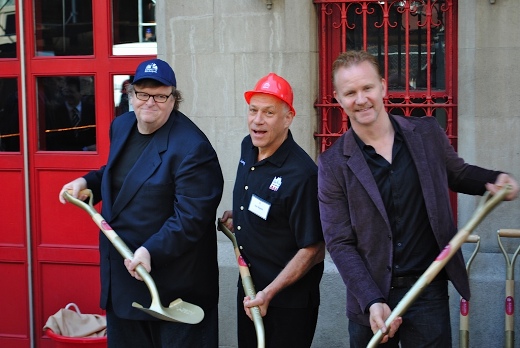 At the microphone, Morgan Spurlock (Super Size Me), a member of DCTV’s newly formed advisory council, was pumped and spoke fast:

Founded 40 years ago by Jon Alpert and Keiko Tsuno, DCTV is a documentary film education and production center for filmmakers and students with workshops, master classes, post-production services, screening rooms, equipment and studio rentals. Located in downtown Manhattan, DCTV expects the addition of the documentary theater to have a significant impact on documentary filmmaking and on the doc community in New York City and beyond. This will be, then, their “start of a new era.” 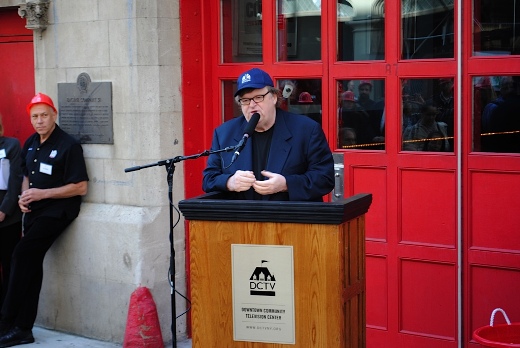 “The movies began here, in New York City, but it’s taken quite a few years for us to have a theater that is dedicated specifically to documentary films.” After pointing out that the public loves non-fiction literature, television and film, yet in the film community the non-fiction contingent is treated as some weird cousin, Moore touched upon a favorite theme: “We need truth now in these times more than ever. We need people bringing us the truth now more than ever.”

The filmmaker-activist, who five years ago renovated and opened a theater in Michigan, made it clear that he wants more. “I hope this theater becomes a model for other documentary filmmakers to open other theaters like this around the country — you’re going to be the Johnny Appleseed of this movement, Jon [Alpert].”

Only minutes past the ceremony’s scheduled 30-minute time limit, 10 notables – government officials and documentary filmmakers – squeezed together to form a half-circle around a small box on the sidewalk filled with sand. With shovels at the ready, they stared into a hail of flashes as a slew of photojournalists on a raised platform barked, “Get closer …Everyone’s head up…Smile….”