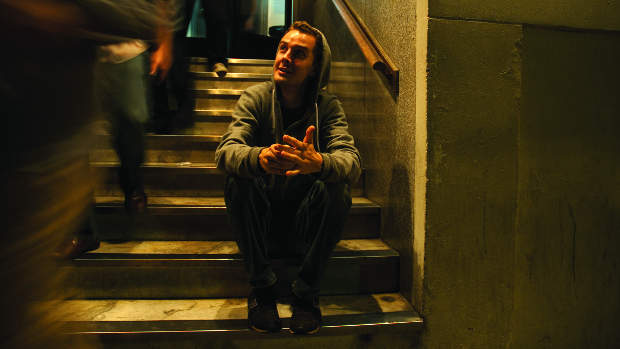 “I know a lot of filmmakers grew up making movies, but I didn’t really do that,” reveals Adam Bowers, the writer, director and star of the Sundance NEXT entry New Low.  “While they were getting experience I was just getting experience being an idiot.”

If you caught his film in Park City this year then you’re probably not surprised by this admission. Perfectly playing the quintessential neurotic schlub, Bowers, 25, has always been fascinated by characters who are a bit self-serving and not too bright. But what makes New Low stand out from other indie comedies is its keen sense of the deadpan setup and the follow-through punch line, which Bowers grasped through hours of watching Woody Allen and Larry David. (He admits to being a huge Seinfeld fan as a kid.) With his sheepish expressions, he plays the film’s lead, Wendell, as a pathetic twentysomething wandering the streets of Gainesville, Fla., with no sense of purpose other than making sure his zipper is up. But inconceivably Wendell finds himself caught in a love triangle with a sweet and caring social worker, Joanna (Valerie Jones), and Vicky, an angry drunk bartender (Jayme Ratzer).

Bowers made the film last year after graduating from the University of Florida. Feeling he had to have made something before moving out to L.A., he expanded a short he shot in school, calling on his friends to be his cast and crew. “We shot over the course of five weeks,” he says. “Some days would be two hours, others would be 20. We just had to take what we could get.”

Having acted with the local improv groups in Gainesville, he wasn’t too intimidated by being in front of the camera for the entire film but he says when it came to the script he was very particular. “I’m kind of OCD with my scripts,” he says. “When I was writing [New Low] I was literally going over and over it, adding commas and things like that, things that didn’t even matter. We had some improvised scenes, but mostly I wanted it to be tightly scripted.”

Though New Low wasn’t the most talked-about title in Sundance’s NEXT section, it got Bowers representation in L.A. and he’s confident that a DVD/VOD deal for the film is imminent. Up next could be a few acting gigs, but Bowers says he’s more focused on his own writing-directing projects. “I like that I have my own work and my own little world to go back to,” he says. “Hopefully my next thing can be on a larger scale than New Low, but if not I know now how to do it the bare-bones way.” — J.G.