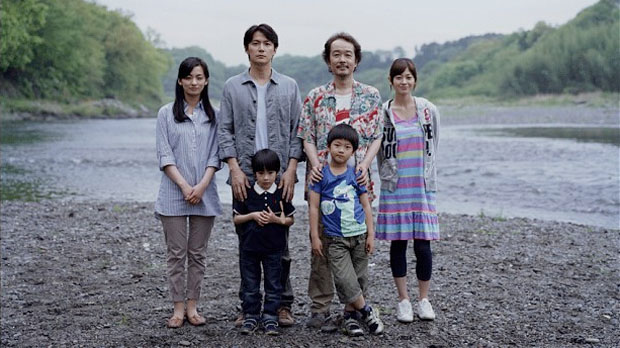 Hirakazu Kore-eda’s Like Father, Like Son engages with questions of family and identity, exploring what it means to be a father, using a plot device in which children from two different families are switched at birth, a detail that is only discovered when the sons are about to enroll in school. The film’s primary point of identification is Ryota, a young father and ambitious businessman who strives to provide for his family and also to ensure that his son will have every opportunity for success.

This desire for success is conveyed from the very opening shot, in which Ryota’s son, Keita, is being interviewed to attend a highly regarded private school. Keita offers thoughtful, seemingly spontaneous, answers to all of the teacher’s questions, and only afterwards do we realize that Keita has made up a story about flying kites on the beach because he has been taught in “cram school” that the schools like that kind of response.

Keita shows that he is a diligent student, practicing at music and studying several hours a day, prompting Ryota to remark that Keita is just like him. Soon after the interview, Keita is enrolled in the school, and the family seems to have achieved something of an ideal situation. But shortly after this success, the parents learn that Keita is not their biological child, that he was switched at birth with another child, Ryusei. This discovery prompts Ryota to question his connection to their child and to face a decision about whether to sacrifice six years of parenting to raise his “real” son instead.

Ryota and his wife soon discover that their choice will offer a serious test to the idea that a biological connection transcends the years of nurturing they have spent with Keita. Initially, Ryota and his wife, Midori, have high hopes for their biological son, Ryusei. Ryusei has tested well, but his father is everything that Ryota isn’t. Where Ryota is unemphatic, quiet, and often distant — more than one person points out that their home resembles an expensive hotel room — the other dad is playful, casual, and practical. He joins his children for their nightly baths, takes them to play, fixes their toys when they are broken. He wears bright colors and Hawaiian print shirts and has a restless and charming spirit that contrasts with Ryota’s stillness, a contrast that is emphatically illustrated in a photograph showing the two families posing beside each other, with Ryota’s family wearing dull colors and posing identically, while the other family playfully mugs for the camera.

After deciding to switch, the two couples then engage in an unlikely and often awkward interaction. Eventually they opt to switch children, but only after spending a few weekends together, a change that the two sons take in a surprisingly matter-of-fact way. The film then explores Ryota’s struggles to evolve as a father, learning to be more focused on family and less concerned about his career.

Although the film is often shot from relatively low angles, suggesting a child’s POV, Like Father, Like Son is very much Ryota’s story. We get a somewhat limited sense of how the two mothers feel about switching children — an odd exclusion given that the mothers played a central role in raising their children. The children do very little to question their new circumstances. Keita embraces his exciting new family, while Ryusei is initially bored, playing video games but not really questioning things.

But my biggest reservation about the film was its suggestion that the poor — or working class — are inevitably happier and more fulfilled than the wealthy. While Ryota has a great career, we get little sense that he enjoys his work or that it is meaningful to him. This is not meant to discount the pleasures of parenting, but it felt as if Like Father, Like Son reinforced an artificial divide or choice between work and family, while also overlooking some of the emotional complexities that might confront these two families. 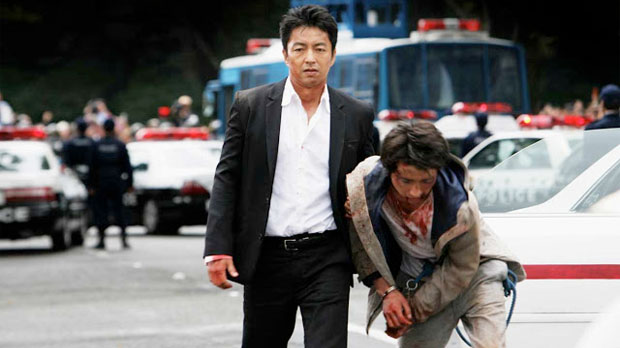 Takashi Miike’s Shield of Straw was one of the more personally disappointing entries among this year’s Competition films.  To a great extent, the film seemed to rely on action film clichés while offering a somewhat heavy-handed — and often redundant — meditation on the conflict between duty and honor on the one hand and revenge on the other. The film opens with discovery of a brutally murdered seven-year-old girl. The wealthy (and dying) granfather of the dead girl has placed a 1 billion yen bounty on the killer’s head and even advocates that any citizen can take the law into his own hands. Thus, rather than a police officer leading a manhunt, the film shows a team of officers forced to escort the criminal, Kiyomaru, to Tokyo where he can stand trial.

He is protected by a team of supposedly elite police officers, including Mekari, who is mourning his dead wife, who was killed by a drunk driver and went unconvicted, and Shiarawa, an ambitious female officer and single mother, who hopes to use the high-profile case to secure a promotion.

This sets up a series of escalating action sequences in which the police must protect Kiyomaru against attacks from potentially anyone willing to risk death or injury to collect the reward. A nurse in the hospital attempts first by trying to poison Kiyomaru, and later the convoy of police vehicles is attacked by a truck driver carrying explosives, prompting the officers to manufacture an improbable escape, one that puts them on a passenger train to Tokyo. Even the police themselves are not beyond sacrificing their duties to claim the reward, leading to several scenes in which the team must reevaluate their relationships and work through their suspicions that other officers may be trying to get the reward money.

Throughout the film our distaste for Kiyomaru escalates, making it even more difficult to remain dedicated to the code of honor that comes with upholding the law. The film’s unflinching honor code evokes some compelling questions about the nature of justice, but these reflections sometimes felt a little heavy-handed in places, as if the director needed to circle back repeatedly to remind us that each of the characters might have a hidden (or not-so-hidden) motivation for getting rid of Kiyomaru and accepting the reward, despite the violation of personal honor.

The characters generally serve as types, rather than fully fleshed out beings with fully convincing motivations. The depiction of Kiyomaru, in particular, was a bit flat, making it difficult to maintain the belief that any type of honor code or duty should give the officers any pause.