There Goes the Neighborhood: the 16th Brooklyn Film Festival 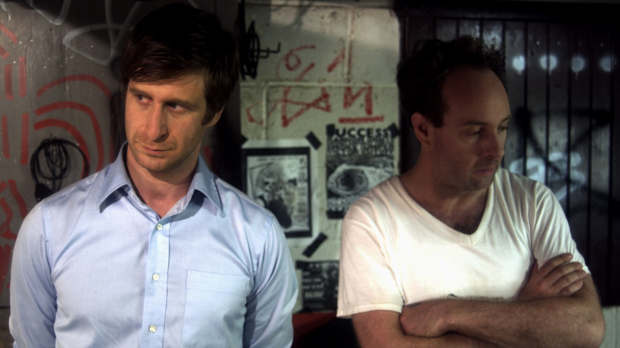 It’s a tough thing, being the Brooklyn Film Festival. Perched right at the beginning of the summer, the festival, which just concluded its 16th year, has the potentially world-class brand of Williamsburg Cool to exploit. According to most casual observers, it has never been able to adequately do so. The New York cinerati just doesn’t take the event seriously. If they don’t, who else will?

The reasons for its reputation remain somewhat murky, but most lay the blame on the festival’s programming. The festival certainly suffers from its placement in this regard, between its newer, more prestigious Gotham neighbors Tribeca and BAMcinemaFest, the latter of which has quickly emerged, in just the fifth year since it morphed from its previous Sundance-at-BAM incarnation, as the most desirable alternative to New Directors/New Films for popular work from Sundance and many other significant winter/spring festivals to make their New York premieres. The rest, at least those without the grand ambition of being at NYFF, would prefer to settle for Rooftop Films. While NewFest, long New York’s most significant early summer festival, has moved to September, upstarts like the Northside Festival now vie for the same Williamsburg stronghold, with its host of trendy new cinemas and ostensibly trendier people.

Based at Kent Avenue’s indieScreen — just a stone’s throw from the menacing new condos that have populated the north Brooklyn waterfront with financial professionals who wear Sketchers on the weekends when they’re not enriching themselves at everyone else’s expense — this year’s event opened with the world premiere of Billy Kent’s Hairbrained, about a 13-year-old genius who goes to college early despite his drunken mother’s poor childrearing and becomes the star of his Ivy-envious university’s quiz team with the help of a middle-aged undergrad played by Brendan Fraser. The movie is as derivative and uninspired as its premise suggests, not as funny or satisfying as the director’s previous Parker Posey-vehicle, the Cleveland-set The Oh in Ohio. The newer effort is the type of film that is bound to rack up a lot of 10-minute suspended views on Hulu one day.

Dan Eberle’s all-too-self-serious yet outright campy monochromatic neo-noir Cut to Black was the closing night selection. Meditating on a terminally ill ex-cop/ex-con/private eye named Bill Ivers (played by the director himself), who is hired to investigate the stalking of a wealthy city councilman’s daughter, the film is derivative in a more interesting way; its aesthetic feels like something Michael Mann would conjure if he was restricted to making a cheap black-and-white DLSR movie with a student gaffer. Its charms eventually wear thin, but there are some good laughs to be had at the film’s expense along the way. Featuring some of the hoariest private dick clichés alongside uniformly underwhelming production values and downright awful acting, the movie’s indecipherable plot is obfuscatory enough to make a more detailed synopsis undesirable for both reader and reporter. Still, the thing picks up an odd kind of momentum, its scatterbrained, fatalistic narrative serving mainly to direct your attention toward its peculiar brand of crackpot, tough-guy existentialism. If only the movie starred Steven Seagal and was conscious of its shortcomings in a more formally invigorating way it would be a masterwork.

There was good work to find if you looked hard enough. Columbia grads Damon Maulucci and Keir Politz’s Detonator, starring Lawrence Levine as an ex-punk-rock wunderkind who’s on the straight and narrow, is a fun, near-Cassavetian ride through the Philadelphia night. Despite his new life of mixed-race babies, tattoo removal, office jobs and belt clips for his smart phone, the protagonist, along with his unstable ex-bandmate — who has emerged from the loony bin with some debt, an impending jail sentence and the desire to get long overdue recognition for his music — embarks on a long night of recrimination, theft and making very unsavory people angry at them both. Levine is quite good throughout, and the picture features a gallery of stereotypically persuasive supporting turns from the likes of Robert Longstreet, Joe Swanberg and Sophia Takal (Levine’s wife and frequent collaborator). Detonator, which had a relatively low key world premiere at Cinequest earlier in the year, is surely the discovery of the festival.

Flying Blind, a British thriller by the Polish filmmaker Katarzyna Klimkiewicz, about a middle aged engineering lecturer/drone designer who gets involved — at her great expense — with a young Arab engineering student who may or may not be a jihadist, has a premise that bends toward the timely and the shrill simultaneously. The film, produced by the BBC, features a pair of terrific performances by its leads Helen McCrory and Najib Oudghhiri, however, and as predictably dour and ambiguous as the ending is, it is relatively involving, with some intricately photographed sex scenes. Indeed, Andrzej Wojciechowski’s unshowy but expressive cinematography steals the show, and the movie is ultimately able to transcend its topical, earnest TV-movie vibe.

Among the films to file in the “not terrible or annoying but definitely representative of the Brooklyn Film Festival’s commitment to mediocrity” sub category is Jeremy O’Keefe’s Somewhere Slow, which won the festival’s Best Narrative Film Prize. It’s a meandering, tonally off-kilter look at the brief romance between a Mormon drifter kid and a middle-aged, recently fired cosmetician whose bulimia and bad facial skin peg her as someone in need of redemption or age-inappropriate love (or both). So-so lensing and an uneven performance from TV star Jessalyn Gilsig are pitted against some strong scenes, but the overall effect is underwhelming. Blink and you’ll miss Lindsay Crouse; not surprisingly Robert Forester’s one scene as a laundromat operator is the best thing in the movie.

The above piece was corrected after initial publication to reflect the fact that the Brooklyn Film Festival has screened in Williamsburg in years prior to 2013.