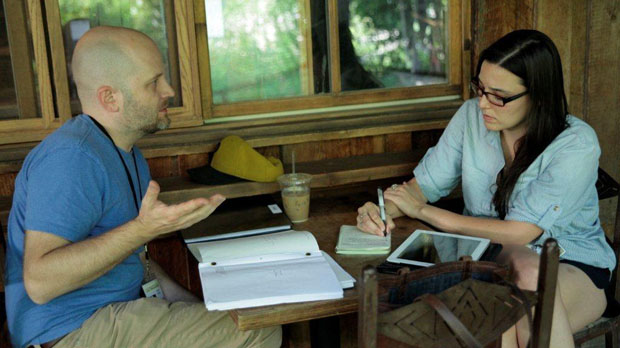 by Gabrielle Nadig
in Filmmaking, Production
on Aug 9, 2013

Producer Gabrielle Nadig was recently at the Sundance Creative Producing Summit with King Jack, a project written and directed by Felix Thompson about a 15-year-old boy looking after his younger cousin for the weekend who must also deal with the local bully. The following is what Nadig wrote about her experiences there.

The Sundance Creative Producing Lab has changed my life.

I realize this is a bold statement but I know that my five fellow producers chosen to participate in this year’s Lab would say the same. I have never been a part of a program that was so nurturing, generous, uplifting, and reinvigorating. Nor have I had an experience that so completely broke me down and built me back up as a filmmaker.

I had always wanted to work as a producer. I began my career as a production assistant on union sets in New York and, after graduating from NYU in 2009, I was fortunate to become the assistant to a legendary producer in the city. It was an incredible experience and eventually I was able to start my own Brooklyn-based production company: Buffalo Picture House. However, while I had worked on features in many capacities and on countless award winning short films and commercials as a producer, I had yet to stand at the helm of my own feature film project.

I had known about the Sundance Labs for quite sometime. I thought it would be indie-producer boot camp. A weeklong program in the mountains with five other producers and countless mentors, workshopping projects until they were the best iteration of what they could be. So I cannot describe the shock and excitement I felt on being accepted. But somehow even all my research could not have prepared me for the experience.

Arriving at the Labs was like stepping into a creative bubble. Not only were we literally isolated on a mountain resort but we are also forced to address the creative challenges facing ourselves (and the film industry) without any breaks or interference from the outside world. We were all told to stop checking our email and to disconnect from our responsibilities outside of the mountain.  The incredible Sundance Institute staff was there to guide us the whole way, while our team of advisors (including Anthony Bregman, Mary Jane Skalski, Paul Mezey and Jay Van Hoy) generously gave up their week to work with us in great detail on each project.

I cannot express how fortunate we were to have the advisors that we did. These advisors were producers I had admired my entire career and the access we got to them was unparalleled. The care and dedication they gave to each project and Fellow was astounding, but it was also incredibly inspiring and humbling to hear about how they built their careers and the personal stories they had about their lives as producers. I cannot tell you how many times Eternal Sunshine of the Spotless Mind was mentioned and/or referenced back in film school. So it was a bit of a surreal experience sitting next to Anthony Bregman as he explained the way he found that project and how he made that movie happen without holding back on the details. The poster for Maria Full of Grace is hanging on the wall at NYU, and now I was getting to hear Paul Mezey meticulously discussing the production of that movie.

Over the course of the week the institute staff and the advisors cut through our pitches and our scripts, getting to the heart of our ideas. Why this film? Why now? Why were we the ones that had to make it? It was often the simplest questions, or the one’s we took for granted that were the most revealing. They got to the heart of our belief in our stories, and openly tackled any fears that we might have shied away from. It was like holding up an objective and painfully honest mirror to ourselves as storytellers and producers.

On the first night of the Labs, I found myself in a one-on-one meeting with Jay Van Hoy of Parts & Labor. Jay was one of the advisors I was most excited and terrified to meet. His career and the work he has created has inspired me as a young producer and now I was sitting with him dissecting my script. It was amazing to be able to sit with someone with the singular and focused goal of whittling out the heart of your story. There wasn’t a phone ringing in the background or an email that had to go out. It was just the words on the page, the ideas that blossomed from them and the constant underlying question of “How can this be better?” I cannot stress how insightful Jay and all the advisors were. Their experience with every aspect of the storytelling process was eye opening. Their understanding of what makes an audience tick, what draws them in, and the responsibility of the storyteller is something that will stay with me for a long time.

While the Lab was a whirlwind of talks, one-on-one sessions, dinners and the occasional bouts of hanging out – one particular thing that stood out to me was the work we did on pitching. Learning how to deliver a great pitch is a skill every producer needs to master and it is also, oddly one of the hardest things to practice. Friends and peers can give you advice to a point, but being able to practice your pitch with people who hear them day in and day out is something else entirely. Not only were the mentors direct, honest and helpful but they also brought their considerable industry knowledge to bear. Mary Jane Skalski and I talked at length about my particular project and she was able to give me an incredible perspective on my story that no one else had yet thought of. Her advice was so simple but perfect to hook any listener. The advisors all worked intently with us on practicing being conversational while still conveying the emotional importance of our projects. They were very good about letting us know when they were hooked and when they tuned out. They also let us know what parts of the story were most interesting to them, and what pieces to emphasize depending on different audiences. This was work that became incredibly important during the Creative Producing Summit that took place at the end of the Labs (an equally incredible experience where we met countless incredible producers, agents, lawyers, sales agents and financiers).

It is hard to describe exactly what the Sundance Lab is. It’s part compressed grad school and part producer sleep-away camp, but it’s also somewhere between a punch in the gut and an electrical shock to the brain. Ultimately it is a place where young producers can take part in the independent film community and realize there is a place for them in it. The friends and relationships I have made here mean the world to me. It is perhaps these above all else that the Lab has left me with. Programs like the Sundance Labs enable filmmakers to connect with their industry on a deeper level. They broaden our experience and understanding of the world we are going out into, and they give us a community of people to whom we can turn. All six of us feel like different people than when we began. We have joined the independent filmmaking community and now it is time to make our films.