Click Here Lifts the Curtain on the Development Process 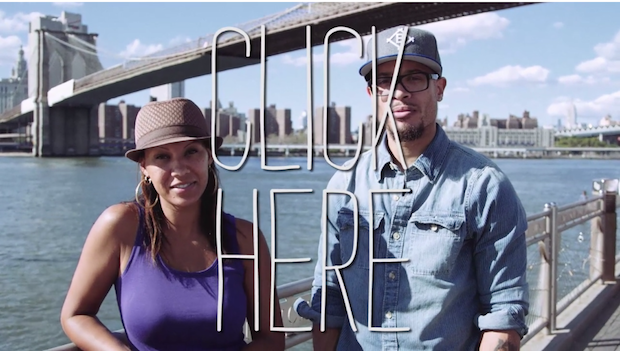 Any filmmaker knows that the script is but the first brick in a winding pathway to production. The feature documentary Click Here: Or How I Learned to Stop Worrying and Love Making Movies takes this fact to heart, training the lens on the action that transpires before the camera even rolls. For Pete Chatmon and Candice Sanchez McFarlane, the development process effectively began at the 2008 Tribeca Film Festival, where their screenplay $FREE.99 debuted in competition, netting Chatmon TFI’s Creative Promise Narrative Award. While they found their fair share of industry champions, raising production funds proved to be another story altogether.

Five years later, they’ve extrapolated from that story to create Click Here, which “follows several emerging mediamakers as they navigate the minefield of taking a project from script to screen.” With 30 interviews already shot in New York, the duo are crowdfunding over at Seed&Spark for a chance to continue conversations in Los Angeles, San Francisco, and Austin. The project strikes me as a novel and essential tool, one that I hope will see fruition, and make development a little more hopeful. To view excerpts from interviews with Tugg’s Nic Gonda, NYU Graduate Film Chair John Tintori, VHX’s Casey Pugh, Life of Crime director Dan Schecter, Franchesca Ramsey, DIY purveyor of the hilarious “Shit White Girls Say to Black Girls,” and many more, head to Click Here’s Vimeo page.