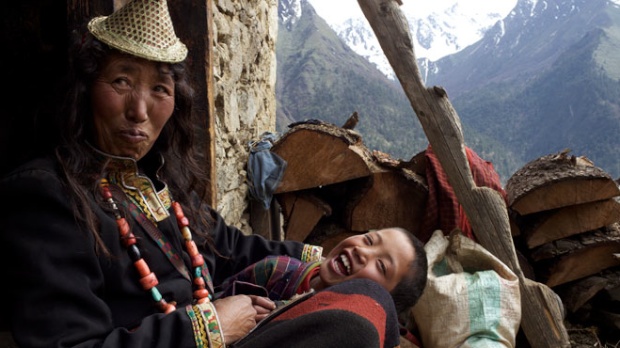 A couple nights before the Sundance Film Festival commenced this year, I came home one evening hoping to squeeze in at least a couple of pre-fest screeners before I went to bed, knowing I had a full day of hack journalist duties awaiting me the next morning. While taking the train back from the Filmmaker offices and walking through a dreary Bedford-Stuyvesant evening, I dreaded what I thought I would discover upon returning home: a subletter — a young aspirant sportswriter whose presence in our home had only been announced by one of my more regular roommates the day before he ceded the room to the man — was once again hogging my projector. Was he watching something with intent, with purpose, with seriousness? No. He was channel-surfing aimlessly between various Comedy Central animated shows, a Bulls/Wizards regular season NBA game and a broadcast of Malcolm X on BET, all while eating a more-than-appropriate share of the guacamole and organic blue corn tortillas I had recently purchased.

I thought about that sorry episode (“I have a job to do, you lazy motherfucker!”) while watching one of the best documentary films to screen at this year’s Sundance Film Festival, Thomas Balmès’ Happiness, which world premiered Friday night in Salt Lake City, far away from the roar of the festival proper. Set in the remote, mountainous, landlocked South Asian country of Bhutan, one which until very recently has been without most modern amenities, Happiness shows us one instance in which modernization and tradition butt up against each other in ways that are peculiar and mundane as opposed to especially dramatic. That it does so in an aesthetically bold way, one which calls into question whether this film can even be considered a documentary, is the primary cause of its value.

Happiness starts with 1999 archival footage of King Jigme Wangchuck (no, he’s not a Thomas Pynchon character) informing the citizenry, which numbers less than a million, that he will allow television and the internet to be used in Bhutan, hoping it spreads “gross national happiness” and general good will, but warning that it can have a negative effect as well. Does television make you happy? Bhutan was certainly about to find out.

Much later, we presume (indie filmmakers from the West who went off to make movies about South Asians living without electricity didn’t have such nice HD cameras until almost a decade later), Thomas Balmès visited the town of Laya, the last tiny mountain village in this Himalayan kingdom to receive electricity and television service. Here he tells a tale shot with the precision, care and control. Happiness is about an eight-year-old monk in training, Peyangki, who is cajoled by his mother to enter a monastery, mainly because she can’t afford to pay for his schooling.

Peyangki, like seemingly most of the non-clergy in the town, is more interested in the forthcoming electric power and television service than praying, it seems; when he goes into neighboring Tibet to accompany a man who is buying a TV set for the first time, he visits his sister, who works as a dancer at a nightclub. He looks, despite his monk outfit, oddly at home amidst the candy-colored glow of neon lights. This young man isn’t the first person to realize that experiencing the pleasures of this world is more desirable than meditating on those of the next, but rarely is this realization rendered in cinema with such slow cinema photogénie. Mr. Balmès and cinematographer Nina Bernfeld shoot this movie as if Roger Deakins was DPing a Chantal Akerman documentary — all static, well-composed shots in which people seem to interact in rhythms more familiar from mannered narrative than fly-on-the-wall vérité.

It’s a bit of an unintentional horror movie, though. We watch this serene place, where generations of Bhutanese have lived off the grid in harmony and spiritual contemplation, naively begin its inevitable submission to the same technological forces that have come to dominate modern life everywhere. Sure, some folks, like the local Lama, warn of the consequences of modernity. But for the most part, these people are giddy at the newfangled things coming their way, unconcerned with what they might be losing as a consequence. The citizens of Laya may never suffer from an empty “connectedness” in the way we do in the fiber-optic-era West. Their young may never troll Facebook for a status notification or stalk young ladies on OKCupid. But the movie suggests a profound sense of loss as middle-aged women complain that their partners haven’t come back with a big enough TV, or as they contemplate charging other people to use it. High up enough in the mountains so that clouds hang low over people’s heads during conversations that play out in medium shots, Laya is suddenly besieged with men in workman uniforms and hard hats carrying pipes and cables. The last sequence in the film — in which, at last, electricity has been procured and a television supplied — finds these mountain people entranced like the Lumières’ first audiences, if only by the possibility of viewing WWE wrestling matches, with the television’s light playing on their faces as some Jerry Lawler and Mean Gene Oakerland wannabes senselessly drone on in the background. It proves to be buoyant and ominous final chapter of the picture.

Web Junkie, a startling new documentary from Israeli filmmakers Shosh Shlam and Hilla Medalia, and Love Child, an equally impactful non-fiction film from Valerie Veatch, would make a fine triple bill with Happiness. Someone ought to show both films to the young monk and his fellow villagers. Both clock in under 80 minutes, briskly telling tales of the dangers of internet addiction. While Web Junkie takes us to an apparently leafy suburb of Beijing, where a rehabilitation center for so called “internet addicts” is run by the first state to label online addiction a clinical disorder, Love Child uses the prism of the death by starvation of a three-month-old child named Sarang (which means “love” in Korean), whose parents were too busy raising a virtual child in the online game Prius to feed her, in order to explore the perhaps outsize role of internet gaming in modern Korean society.

Is there such a thing as internet addiction? Both films seem to suggest that there is. In Love Child, we hear harrowing urban legends retold by gamers who haunt the “PC bangs”, group networked rooms full of computers, used mostly to play online games, that became popular before broadband was widely available in private Korean homes. One woman died of heart failure after playing games for 50 consecutive hours according to popular myth, while another woman gave birth to a child in the public bathroom of a PC bang before returning to her game.

Is such behavior, uh, treatable? In Web Junkie, teenage boys, often having been deceived into going or plainly drugged and captured with their parents’ approval, suffer a military bootcamp-style existence complete with isolation chambers and other forms of moderately cruel discipline, interspersed with moments of counseling from sensitive, largely female psychologists and a tough love institutional leader who likens what the boys are suffering from to heroin addiction. So many of us in the West are familiar with the fear that the information superhighway consumes too much of our lives, distorts our sexual preferences/imagination/being, makes us professional enviers, causes us to share opinions and feelings that are nobody’s business, lets us know what near strangers are doing all the time. But do we need to be, well, cured of it? Has it someone corroded, or added to, our humanity? Clear answers remain opaque; the internet, after all, is still a very new development in human history.

What is specifically going on in Asia, however? If these two docs are to be believed, Chinese and Korean, young and old, male or female, it doesn’t matter; so many, perhaps too many, seem to be utterly consumed with electronic games. Are Beijing and Seoul such polluted and dreary places that its citizens don’t want to play soccer somewhere? Not everyone can have clouds to reach up and touch like the Himalayan children in Happiness, but still. While acknowledging various Asian governments’ approaches to mitigating the effects of “internet addiction” (boot camps for boys in Beijing, the Juvenile Protection Act in South Korea, which makes online gaming unavailable to those under 16 between the times of 12am and 6am) neither movie  stops to ask why? The gamers in both films aren’t reflective enough in the time the filmmakers spend amongst them alone to ever reveal motivations beyond that the games are engrossing.

Regardless, gamers in both films confess to playing endlessly, amounts that would have driven myself — at one time a 10-to-12 hours-a-day-on-the-weekends gamer — a bit crazy. Some of the Chinese teenagers in Web Junkie claim to have played for as much as 300 hours consecutively, and to have stopped eating or going to the bathroom for fear that it would affect their abilities. One of the key characters, 16-year-old Nicky, lied to his parents about going to friends’ homes when he’s really gone out to internet cafes for an all-night bender. He’s a seemingly reasonable kid, except when he’s angry; Nicky engages with some of the most searing adolescent confrontations I’ve ever seen between parent and child in a cinema. At one point, in the middle of a counseling session, he tells his father point blank, “If you want me to die, I will do so right now.” Another time he pleads with them to allow him to come home from the camp (the minimum stay is three months). “Tomorrow, hold my ashes and cry,” he tells them as he hang up. That he then asks his counselor, after a moment of silence, for permission to smash the window next to her seems beside the point, but it’s a glimmer of anger and existential malaise in the New China rarely seen in contemporary filmmaking.

The movie is full of such remarkably candid moments as it charts the time a trio of boys spend in the re-education camp. They are certainly aware that they are being conditioned, or “brainwashed,” and most seem resistant to the possibility of change, of abandoning the internet generally or games in particular, although stories change when the authorities and parents come calling. It’s a remarkable institutional study and in its heightened ambiguity, recalls works as varied as Grady and Ewing’s Jesus Camp and Frederick Wisemen’s High School. Less handsome but more traditionally vérité than Happiness, not as boxed into the talking heads/archival hum drum doc style as Love Child, Web Junkie manages to suggest troubling multitudes about a world the fine folks from Laya will be welcoming into their mountaintop homes anytime now.