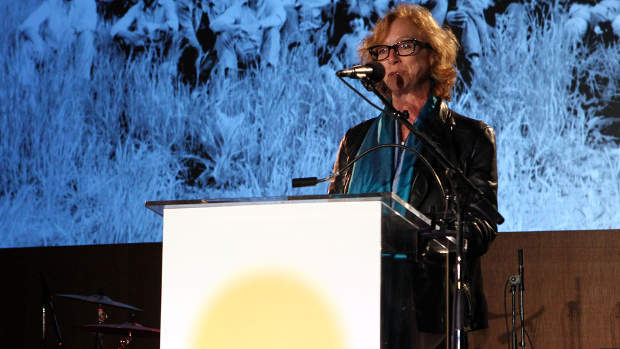 by Billy Brennan
in Directing, Festivals & Events, Filmmaking, Screenwriting
on May 9, 2013

Sundance Institute announced the 13 projects selected for its annual June Directors and Screenwriters Labs, taking place at the Sundance Resort in Utah from May 27 through June 27. Under the leadership of Michelle Satter, Founding Director of the Institute’s Feature Film Program, and the artistic direction of Gyula Gazdag, the Fellows selected for this year’s program include emerging filmmakers and projects from the United States, Europe, Mexico, Peru and Somalia.

Projects supported through the Directors and Screenwriters Labs receive continued, customized, year-round support from the Feature Film Program, which can include the following resources: ongoing creative and strategic advice, significant production and postproduction resources, the Screenplay Reading Series, the Work in Progress Screening Initiative and direct financial support through project-specific grants and artist fellowships.

“Removed from the pressures of production and with the guidance of an accomplished group of Creative Advisors, the 2013 Lab Fellows will be immersed in an intense, hands-on process to hone their filmmaking skills,” said Keri Putnam, Executive Director, Sundance Institute. “The June Lab is the centerpiece of a year-round system of creative and strategic support which begins with script development and continues all the way through to engaging audiences.”

Satter said, “We are very excited to support such a rich selection of projects that reflect the diversity of stories, artistic vision and innovation in narrative form that embraces the next generation of independent filmmakers. The support we provide through the Directors and Screenwriters Labs will allow each artist to develop the tools and confidence to more fully realize the promise of their first and second features.”

The projects and participants selected for the 2013 June Directors Lab (May 27 – June 20) are:

Pamela Romanowsky (writer/director) / The Adderall Diaries (U.S.A.): Writer Stephen Elliott reaches a low point when his estranged father resurfaces, claiming that Stephen has fabricated much of the dark childhood that that fuels his work. Adrift in the precarious grey area of memory, Stephen has to navigate the unstable terrain of truth and identity, led by two sources of inspiration: a new romance, and a murder trial that reminds him more than a little of his own story. Based on the memoir by Stephen Elliott.

Pamela Romanowsky is a New York-based writer and director. Her short films Live Girls and Gravity have played at festivals nationwide, including Slamdance, Woodstock, and the Maryland Film Festival. In 2011, Romanowsky won the National Board of Review’s Student Grant Award and NYU’s prestigious Wasserman/King Award for excellence in filmmaking. In 2012, she wrote and directed a piece for Tar (James Franco, Mila Kunis, Jessica Chastain, Zach Braff), a multi-director narrative film based on the life and poetry of CK Williams, which premiered at the Rome International Film Festival and is awaiting a U.S. theatrical release. She studied documentary filmmaking with Barbara Kopple, and narrative filmmaking at New York University’s MFA film program.

Jan Kwiecinski (writer/director) / The Incident (U.S.A.): When a young man decides to cover up an accidental murder, his whole life comes into focus in ways he never expected.

Jan Kwiecinski graduated from the filmmaking departments of the London Film School and the Wajda’s Master School of Directing. He also holds an MA degree in Theatre Studies from the Theatre Academy in Warsaw. His award-winning short film, The Incident, screened internationally at many festivals including the Shanghai International Film Festival and the T-Mobile New Horizons Film Festival. Recently, Kwiecinski directed the segment entitled Fawns of the omnibus feature The Fourth Dimension, co-directed by Alexey Fedorchenko and Harmony Korine. The film premiered in the Narrative Competition at the 2012 San Francisco Film Festival.

Eva Weber (co-writer/director) and Vendela Vida (co-writer) / Let the Northern Lights Erase Your Name (UK/Germany/U.S.A.): Twenty-eight-year-old Clarissa discovers on the day of her father’s funeral that everything she believed about her life was a lie. She flees San Francisco and travels to the Arctic Circle to uncover the secrets of her mother, who mysteriously vanished when Clarissa was fourteen. Based on the novel by Vendela Vida.

Originally from Germany, Eva Weber is a London-based filmmaker working in both documentary and fiction. Her award-winning films have screened at numerous international film festivals, including Sundance, Edinburgh, SXSW, BFI London, and Telluride; and have also been broadcast on UK and international television. Her documentary short film The Solitary Life of Cranes was selected as one of the top five films of the year by critic Nick Bradshaw in Sight & Sound’s annual film review in 2008. Earlier this year, she received the Sundance Institute Mahindra Global Filmmaking Award to further support the development of Let the Northern Lights Erase Your Name.

Vendela Vida is the author of four books, including the novels Let the Northern Lights Erase Your Name and The Lovers. She is a founding co-editor of the Believer magazine and co-writer of the filmAway We Go, which was directed by Sam Mendes.

Russell Harbaugh’s short film Rolling on the Floor Laughing played the 2012 Sundance Film Festival and many other festivals around the world including the FSLC/MoMA co-curated New Directors/New Films, Maryland Film Festival, Sarasota International Film Festival, Milano, Warsaw, and others. Harbaugh received his MFA from Columbia University in 2011 and is originally from Evansville, Indiana. He lives in New York.

K’naan (writer/director) / Maanokoobiyo (Somalia/U.S.A.): In war-torn Somalia, an artistic orphan named Maano joins the mercenary killing squad of a notorious warlord, only to discover his adoptive father and gang leader is responsible for wiping out his family.

K’naan is a Somali poet, rapper and singer, songwriter. He spent his childhood in Mogadishu, Somalia and was on one of the last commercial flights out of the country before its collapse. He rose to prominence with the success of his song “Wavin’ Flag” after it was chosen as the anthem of the 2010 FIFA World Cup. He lives in New York.

Ian Hendrie is a San Francisco–based filmmaker and the co-founder of Fantoma, a production company and independent DVD label which has been releasing premium edition DVDs of films by such famed auteurs as Francis Ford Coppola, Rainer Werner Fassbinder, Samuel Fuller, Fritz Lang, Kenneth Anger and Alex Cox, among others, since 1999.

Jyson McLean has been a commercial director for over nine years. His work includes spots for Bud Light, Career Builder, and Quaker Oats. He has won the ITVA PEER award three years in a row, and has worked with numerous award winning advertising agencies including DDB Los Angeles, BBDO London and Fred & Farid, Paris. He is currently signed at Contagious LA and Magali Films, Paris for commercial representation in America and Europe respectively.

Hendrie and McLean are recipients of a Fall 2011 SFFS/KRF Filmmaking Grant and SFFS FilmHouse residents.

Meredith Danluck (writer/director) / State Like Sleep (U.S.A.): Under the surreal cloud cover of northern Europe, a young American widow reluctantly revisits her past when her mother is hospitalized in Brussels. While coping with the bleak reality of parental loss, Katherine explores her deceased husband’s secret life of underground sex clubs and finds comfort in a relationship with a stranger as equally broken as she is.

Meredith Danluck is an artist and filmmaker. Her work has screened at major art institutions internationally including MoMA, PS1, Venice Biennale, Liverpool Biennial, and Reina Sofia, as well as various film festivals including SXSW, TIFF, Doc NYC, Margaret Mead and Hamburg International. Her four-screen film installation North of South, West of East recently screened as part of the New Frontier exhibition at the 2013 Sundance Film Festival.

Miguel Calderón (writer/director) / Zeus (Mexico): Sporadically employed and still living with his mother, Joel finds his only joy in falconry in the flatlands outside Mexico City, until an encounter with a down-to-earth secretary forces him to face reality.

Miguel Calderón works in various mediums but has focused mostly in photography, video and writing. He was a co-founder of the non-profit art space, “La Panaderia,” which helped promote new tendencies of art in Latin America beginning in 1994. His exhibitions include the Rochester Art Center, the Sao Paolo Biennial, Museo Tamayo, The Yokohama Triennial and Museo Centro de Arte Reina Sofía. His book projects include Thumbs Down (onestar press, 2012), Backstabbing Gemini (Rochester Art Center, 2012), Eden is a Magic World (littlebigman books, 2011), and Miguel Calderón (Turner, 2007). He lives in Mexico City.

The projects and participants joining the Directors Lab Fellows for the 2013 June Screenwriters Lab (June 22-27) are:

Ray Tintori (writer/director) / Untitled Cabal Project (U.S.A.): Young revolutionaries in love take on the world and each other in a kaleidoscopically complicated universe that’s coming apart at the seams.

Ray Tintori is an American director, screenwriter, and founding member of the Court 13 filmmaking collective. His directorial credits include Death to the Tinman and the music videos off MGMT‘s first record. Besides directing, he’s worked in various capacities on Court 13 productions, including production designer and story co-writer on Glory at Sea, and Aurochs and Special Effects Unit Director onBeasts of the Southern Wild.

Bart Layton (writer/director) / The Heist (U.K.): This fiction/documentary hybrid tells the unlikely but very true story of four privileged Kentucky students who, seeking an escape from mundane middle America, hatch a plan to steal millions of dollars of rare books from their university library.

Bart Layton is a multi-award winning director and producer. His most recent documentary film, The Imposter, received almost unanimous critical acclaim after premiering at Sundance, won the Grand Jury Prize at Miami, the Golden Eye in Zurich and the Filmmakers’ award at Hotdocs before winning a BAFTA and being shortlisted for the Oscars. Layton lives in London and is the Creative Director of leading British production company, RAW.

Andrew Ahn (writer/director) / Spa Night (U.S.A.): Struggling to escape his crumbling family life, a closeted Korean-American teenager follows his desires and finds more than he bargains for at the Korean spa.

Andrew Ahn is a Korean-American filmmaker born and raised in Los Angeles. His short film Dol (First Birthday) premiered at the 2012 Sundance Film Festival and received the Outfest Grand Jury Award for Outstanding Dramatic Short Film. He graduated from Brown University with a degree in English and received an MFA in Film Directing from the California Institute of the Arts.

Nikole Beckwith (writer/director) / Stockholm, Pennsylvania (U.S.A.): When a young kidnapping victim is reunited with her family after 19 years, her mother discovers she has to work harder than ever to find her daughter, at any cost.

Nikole Beckwith is from Newburyport, Massachusetts. Her plays have been developed with The Public Theater, Playwrights Horizons and The National Theatre of London among others. Stockholm, Pennsylvania (2012 Nicholl Fellowship, 2012 Black List) is her first screenplay, adapted from her stage play of the same name.

Alvaro Delgado-Aparicio (writer/director) / Story Box of Dreams (Peru): In a rural community outside Lima, a young boy escapes from home to become a story box artisan, a sophisticated craft practiced only by a select group of families who have passed their skills down over generations.

Alvaro Delgado-Aparicio is an organizational psychologist and filmmaker from Peru. He received his BSC and MSC from the London School of Economics and Political Science and attended film directing workshops at the London Film Academy. He wrote and directed the award-winning short film El Acompañante (The Companion), which played at the 2013 Sundance Film Festival and many other festivals around the world including Rotterdam International Film Festival, La Habana, Palm Springs, Miami, Cork, Leeds, Atlanta, Indie Lisboa, Nashville, and Maryland, among others.