“A Tiny Drop of Dew”: Journey to the West at the Tribeca Film Festival 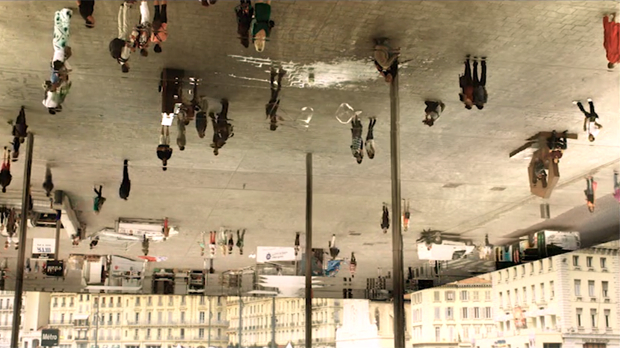 Journey To The West

Journey To The West‘s 14 shots begin with an extended screen-filling close-up of Denis Lavant’s face, neck and shoulders. His carotid artery’s unignorable pulsing attests to how difficult it is to attain complete stillness and mastery of even a small portion of the body; wrapped in a Buddhist monk’s robes, Lee Kang-sheng’s subsequent slowgoing progress across Marseilles magnifies that strain across an entire person. Lee must always maintain motion without going any faster than absolutely necessary, and his legs and torso sometimes wobble with the effort of restraining more violent movements.

In two extended centerpiece shots, he descends the stairwell of (seemingly) a passageway between two street levels and crosses a street corner in front of an urban intersection’s cafe. Lee’s conspicuous appropriation of a significant section of space that rushed pedestrians could use more efficiently draws appreciative spectators, who themselves in turn become subjects for contemplation. The other 12 set-ups are (comparatively) briefly executed and have earned widespread “Where’s Waldo?” comparisons for the way the monk’s spotted in a mirror or emerges next to a carousel only after multiple obscuring buses have passed by.

Lee takes an unconscionably long time to appear in the last shot: scanning with no success for anything red and slow-moving, I wondered if I’d dropped the ball as a viewer. When he finally showed, I relaxed and could finally move my eye calmly around an entire subway station plaza mostly seen upside down (a reflective ceiling bisects the frame). It’s an uncharacteristically sunny playscape for the frequently dystopian Tsai, compositionally anchored centrally by a giant bubble balloon blower who’s undaunted even though his efforts result in inevitable pops. A heavy metaphor (just like life itself!), but the unexpected frantic investment in confirming Lee was still trudging and visible makes for an unexpected climactic emotional reward.

“Like a tiny drop of dew, or a bubble floating in a stream […] So is all conditioned existence to be seen”: the ending titles’ exhortation (from The Diamond Sutra) regarding serious, intense contemplation of the sensory particulars of one’s brief existence makes the motivation for this mode of pilgrimage obvious. “To be able to appreciate details like the transformation of the light, or the particularity of a sound, we need time,” Tsai said last year. Viewed coming down a stairwell or entering the collective consciousness of a cafe crowd, Lee’s presence is the catalyst to observe his surroundings and/or interesting reactions from those around him.

In such all-round attentive circumstances, an everyday change of light is indeed especially impactful. The monk is a conduit for some kind of heightened, vaguely spiritual aura: his robe glows red, casting a natural hazy spotlight that trails him. Lee’s on-screen function as optional recurring focal point for constant searching examination of the frame is entirely different from his urban novelty status for the observers on-screen. The cafe shot is a chance to observe 15 or 20 autonomous people plus passing extras at extended, head-on length as they ignore, gawk at or stroll around the monk (my favorite: the man who finishes nearly an entire sandwich and tea while Lee crosses).

The gap between bemused on-screen onlookers and the perspective afforded to audience members is conducive to self-reflexive scrutiny: it’s precisely the exactly framed static perspectives distilled to 14 unmoving shots that give both people and their environment the same visual weight. It’s certainly one of the most important films the Tribeca Film Festival is showing, and from noon to 6 today through Saturday it can be taken in as a loop at MoMA PS1’s geodesic dome, an even larger chamber forming a bonus space to attend to in addition to those on-screen. Drop by, tune in and pay close attention: this is a rewardingly compact incentive to focus.