Jealousy or, What Does Philippe Garrel Want? 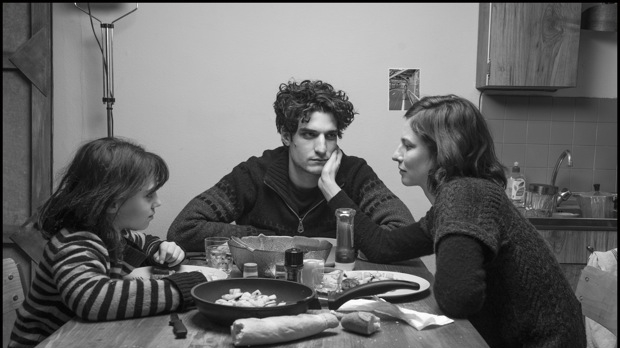 Jealousy’s first view is from a keyhole. Daughter Charlotte (Olga Milshtein) peeps through, watching mother Clothilde (Rebecca Covenant) weep and beg actor husband Louis (played by Philippe Garrel’s son of the same name) not to leave. The film doesn’t primarily concern her feelings, nor necessarily Charlotte’s reaction to the split, though both are foregrounded in passing; as in i.e. recently Boyhood, a primary focus does not preclude space for alternate POVs. The main trajectory is Louis’ short, tumultuous relationship with his new partner Claudia (Anna Mouglalis), someone not nearly as in love with shabby-comfortable apartment life; the movie’s narrative is more or less bifurcated between them.

“That place will be the death of us,” she fumes. “Not if we love each other,” he says. “Not if we love each other?” she seethes. “You can’t love someone in a void.” Later, she’ll be blunter about how she feels: “I’m sick and tired of living here. It’s ugly and depressing. I need light.” Jealousy can be seen in part as a love story mediated by real estate, in which relationships can never be dematerialized. I thought of Preston Sturges’ The Palm Beach Story — one of the only romantic comedies to insist, rightly, that true love is all well and good, but without economic compatibility or some kind of agreement about both parties’ income contributions and desired lifestyle, nothing good will emerge.

Family and love are primary subjects in Philippe Garrel’s recent work, to the extent that you could capitalize both nouns to indicate them as vague Themes. (Mandatory note that the film is based on his real father’s Maurice leaving his wife, a subject dramatized in a 1965 short, Droit de visite, with dad playing himself; here, the young Philippe is Charlotte. In his review of Jealousy, the formidable Blake Williams unpacks the intertextual resonances overlapping with other Garrel films.) For me, though, one of the director’s primary projects (or in-passing strengths) is his close attention to a particular sub-class of domestic space: the urban French apartment as an endearingly grotty environment, miles away from the shabbily prefab complexes many Americans live in. You always hear doorknobs turning, each in their specific way, and the space of an interior room always has its own ambient charge.

In the category of contemporary directors whose work I reflexively anticipate and enjoy to the extent where it’s almost unfair, there are few who make me question my own responses as much as Garrel. I understand what e.g. Hong Sang-soo or Noah Baumbach want from me, but what’s Garrel trying to get at? I always end up chuckling my way through his recent work, but I suspect a more serious reaction is expected, and fear I’m being disrespectful to someone whose work I love. This perceptual problem is embodied by his son Louis, Philippe’s reliably inexpressive leading man since 2005’s Regular Lovers. Possessor of impressive perpetual bedhead and two facial expressions — smiling and non-, basically — the younger Garrel is often a stumbling block for viewers trying to find an in to his father’s undeniably hermetic world.

One question to ask is to what extent Garrel’s Grumpy Cat-esque look of perpetual disaffection is meant to be funny. Because he rarely alters it, the gap between his demeanor and what’s going on around him is sometimes so wide it can’t help but seem inadvertently humorous. This Regular Lovers clip sums it up. People in a dark, not necessarily inspiring apartment start dancing and thoroughly enjoying themselves to The Kinks’ “This Time Tomorrow.” Cut to: a thoroughly disaffected Garrel sprawled on the couch, glaring at nothing in particular. How could I not crack up?

There’s something of the perpetual doofus about him, the knowledge that good hair and an enviable facial structure means he need try only so hard, in life or on screen. If Garrel must seem angry, he seems merely sullen; if thoughtful, he looks hungry. A generally accepted truism is that acting is reacting, but this isn’t advice Louis has taken: whatever happens, he remains the same. This could be a flaw, but there’s something I find helpful, even endearing about this perpetual poker face. In the 2005-and-on Garrel films, people break up, fracture families, attempt and succeed at suicide – but Louis remains unshaken, even when his character is tormented, as if attempting to be a one-man distancing effect standing outside of the narrative.

For all its drama — familial fractures, infidelity, attempted suicide — Jealousy‘s a determinedly quotidian film, one with more laidback banter than heavy drama; there aren’t punchlines so much as a sense of dramatic relaxation. Louis is an actor, and when he hangs with fellow thespians they seem to have nothing at stake: their brief relationship compare-and-contrast chats are the opposite of lay-it-on-the-line male bonding sessions in American romcoms. But defining Garrel in opposition to an easy target doesn’t positively convey the particular temperament of his recent work, which seems unflappable not out of indifference but because it wants to level textual citations, the downtime of the acting process, unremarkable dinner parties, the traditional pointed pumping of a child for information about an ex-spouse, brief but heated splits et al. to the same texture: there’s a seeming randomness, a method whose patterns can’t easily be established. What’s prioritized has the flavor of recollection, which can’t be consciously corralled; Big Moments are immediately recognizable in the present, but the atmospherics of day-to-day life that also stick with you are the real surprise. And the movie’s funny too.

A full list of the film’s engagements can be found here.