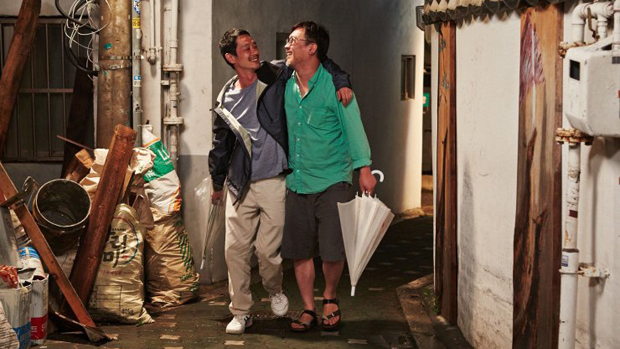 The same trajectory through similar way stations has served Hong Sang-soo equally well from 2004’s Woman is the Future of Man onwards: ill-fated romantic and sexual encounters between men and women fueled and derailed by epic soju consumption, meetings which repeat with a disconcertingly slight degree of difference across the same locations. From such modest materials, the tone has swerved from potentially inconsequential farce (Like You Know It All, In Another Country) to the recent dourness and cyclical/purgatorial futility of The Day He Arrives, Nobody’s Daughter Haewon and Our Sunhi. For detractors, this reliance upon nearly interchangeable plots is an indicator of laziness; for fans (he’s one of my favorite working directors), the point isn’t a comic’s reliance upon the same safe gags (which remain hilarious) but their intricate rearrangement. The degree of tonal difference and emphasis is refracted and clarified by each subsequent work.

Hill of Freedom‘s structural conceit isn’t repetition but randomness: Mori’s letters to Kwon have been dropped on a stairwell and are read in reshuffled order (shades of B.S. Johnson’s The Unfortunates, which has a fixed starting and ending point but whose other 25 chapters can be read in any sequence). The dialogue is predominantly in awkward English, because Japanese Mori (Kase Ryo) is in South Korea to search for Kwon (Seo Young-haw) without a handle on the language. Lingua franca necessity supplements/supplants alcohol as the primary agent for awkward truth-telling. Other disjunctures from past precedent include a liquor switch (wine is the norm, with soju making only a token cameo), a complete lack of characters related to the film industry, and a cessation of repeated trips to the same locations where events mockingly echo each other. Time isn’t real, Mori theorizes, but at least memory is no longer stuck in a loop.

The characteristic Hong male protagonist’s obsession with finding a woman whose nobility could only improve her wayward admirer quickly rears its head. “She’s just a better person than I am,” Mori explains when asked why he’s seeking out someone he hasn’t seen in two years. In Our Sunhi, this obsessive esteem — a search for a helpmate who’s an effortlessly noble crutch rather than an equally flawed partner — hit its logical nadir in three men all in love with the same woman. Sunhi remained unknown to us and them: a conviction in woman’s inherent superiority led to the collective creation of a shared delusion (effortless perfection) barely related to what we see of her (spiky complexity). In Hill, we don’t even hear from Kwon, who reads the letters Mori leaves for her without a visible response. There’s been a shift in POV that seriously kicked in after 2008’s Night and Day, when impatience with the male protagonists moved the perspective over to the women who no longer will put up with these “Korean men” decried along with an angry foot-stamp in In Another Country. Here, as in Sunhi, the pendulum has swung back, putting foolish men under the microscope in isolation.

Obsessed with an idealized phantom, Mori records his days in letters that draw no conclusion or lessons from the random cycle of drunkenness and depressive oversleeping he’s mired in. He’s Hong’s least deluded male protagonist in some time: though he makes errors in judgment, he isn’t perpetually staggering around in an alcohol-fueled haze and seems abstractly aware of the ridiculousness of the situation he’s placed himself in by devoting two weeks to finding a woman who may not want to be tracked down. (He wants to marry her, but we can see the wedding ring on her finger.) The dialogue is frequently hilarious, both as written (?) and as determinedly delivered by a cast of non-native speakers. Side topics of discussion include the nature of characterizing entire nations as possessors of uniform traits, a practice Mori finds “stupid,” perhaps because the major characteristics applied to him aren’t very impressive: regarding the traits associated with him as Japanese, he observes that “being polite and clean is just being polite and clean. It’s not something you love for.”

Via such home truths, the film swerves neither towards jolly farce or depressive stupor, immaculately splitting the difference between comic drunkenness and the piercing sadness constantly running underneath. That melancholy is brought home by one of Hong’s characteristic dream sequences, which rely not on outre imagery but instead flow seamlessly out of the narrative. Here, we’re given the possibility of a happy reconciliation, but the film can’t stop there. We’re all doomed, but at least we can have some laughs on the way.

Hong is an expertly unsparing diagnostician of the anti-revels he can’t tear himself away from; where exactly does Eugène Green stand in relation to his own predilections? La Sapienza is a marital reconciliation narrative, but it seems primarily an excuse to film the Roman Baroque architecture of Francesco Borromini (who I won’t pretend to have heard of before this). There’s a definite pedagogic function embedded in the lectures delivered by reflexively dour architect Alexandre (Fabrizio Rongione), touring Italy with would-be protege Goffredo (Ludovico Succio), whose company Alexandre reluctantly tolerates at his wife’s request. The camera’s no less attentive to the particulars of the churches under consideration than the likes of Hiroshi Teshigahara’s wordless Antonio Gaudi, panning patiently up facades and following their lines as Alexandre narrativizes their function into a coherent story about how buildings visually direct our gaze while also telling some kind of allegorical story about man’s relationship to God. Pace OMD, the film’s quite literally about architecture and morality.

Green avoids traditional shot-countershot: there are a few normal sequences where people address each other in over-the-shoulder shots, but he’s much fonder of isolating faces dead center in the frame, then cutting back and forth. Each sentence has dead air before and after, allowing time for actors to compose their faces and project emotions regardless of the contortions dialogue forces them to assume. This is true of the men and the (admittedly much less focused on) subplot about Alexandre’s wife Alienor (Christelle Prot Landman) and Goffredo’s sister Lavinia (Arianna Nastro). Such hemmed-in symmetricity skirts doll’s house preciousness, but its drollery literally centers the precise meaning of what’s being said. There’s two disruptions towards the end — a mysterious club where coffee shop transplants sit while having good conversations over a not-too-loud beat, and a mention of the most recent inavsion of Iraq in Green’s cameo — but the goal is primarily to conduct a drama within a very particular pocket of European time and space, excluding everything unpleasantly outside of it.

The film’s relationship to the artistic tradition it’s dedicated to is pretty unambiguously committed. A loving opening credits sequence of Borromini’s buildings is juxtaposed with modern-day Paris and Green does not play fair, using color correction to make sure the modern concrete buildings are bathed in an unflattering gray-green pallor that seems especially dispiriting after the bright lights and beautiful curves we’ve just seen. There are other sequences here that toy with a rather antiquated version of snobbery, a chauvinistic possessiveness about the superiority of safely-time-removed European culture manifesting itself in i.e. an Italian guard being gratuitously dickish to an Australian tourist who wants to see a chapel and is instead greeted with questions about whether his wife is a kangaroo. The Aussie is clueless, the guard smugly self-possessed and happy to show the chapel to fellow Europeans. This degree of possessiveness seems a direct outgrowth of the tenuousness of Green’s shaky native claim to the cultural heritage in question. (He’s a New York native who’s now a naturalized Frenchman, and apparently in his daily life he does a nifty impersonation of someone who barely understands English, an affectation even more hilarious after watching his determined but seriously strained French in a cameo.)

For all this, La Sapienza is a pretty lovely film. Symmetricities are everywhere, starting with that opening architectural showreel, which deliberately avoids perfect symmetricity. Panning up a wall’s ridges, one side has a ladder, the other doesn’t; in a shot recording an interior church ceiling’s sun-god-ish central figure, the mirroring curves on the right are just cut off. This initial aversion to precious symmetricity means making sure that there’s the tiniest disruption on one side or the other, though it’s not a hard and fast method to be maintained. Later, his long gaze preserves the perfect symmetricity of painted church ceilings, and he uses a fisheye lens to better isolate and clarify the entrance of a church located on a street whose cramped intersections preclude a clear view from further away.

In Alexandre and Goffredo’s slowly-warming-up relationship, there’s much talk of what purpose these buildings serve. The older man, a former builder of factories, wants to focus on anti-urbanist structures; his would-be student is even more utopian/regressive in his ideals, positive that architecture’s function is nothing less than to create spaces filled with people and light. The light will protect and inspire the people, who will complete the empty space, which is precisely the function they serve for Green. Rather than merely acting as reference points for scale, it’s the human presence (in the work itself and those standing within it) that makes architecture worth looking at.