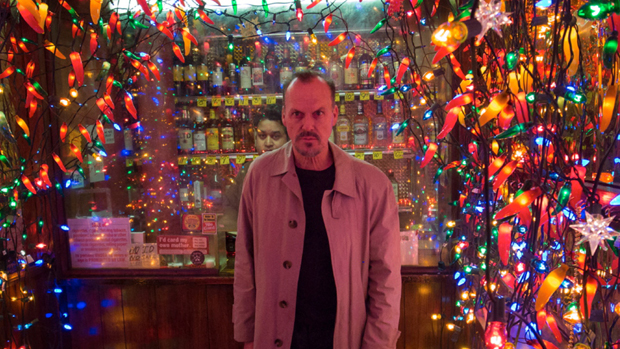 Having barely survived Alejandro González Iñárritu’s 21 Grams when it came out, I was inclined to stay away from his filmography for the rest of my life. But people I respect and trust — Iñárritu haters no less — kept saying that Birdman was actually quite good, so I popped in; two hours later, I felt as if my initial disinterest had been validated the hard way. Praise first for Edward Norton’s note-perfect rendition of the actor as a toxically always-“on,” reflexively self-dramatizing narcissist. Swaggering into conversations and pushing them into weird rhythms he can play with without regard for the other party’s comfort, seeking to turn life into one long Cassavetes conversation, Norton is absolutely spot-on, and the only truly funny thing in the movie.

1. One sustained shot. The number of technical challenges Emmanuel Lubezki has successfully taken on make him something like the James Cameron of DPs; my complaint with Birdman‘s illusory effect of taking place in one sustained shot has nothing to do with his execution, which is pretty faultless. Why does Birdman need to appear to take place in one long shot? As far as I can tell, it doesn’t serve any real purpose and it’s not nearly as much fun as the virtuoso 12.5 minute opening of Brian De Palma’s Snake Eyes. That shot’s purpose was twofold: one, to show an assassination people are going to spend the rest of the movie trying to get to the bottom of, allowing you to see what’s happening while testing your ability to keep up; two, because it’s fun to show off via elaborate choreography. Birdman doesn’t seem to have a thematic purpose for this gimmick, which also creates problems that don’t need to exist; when it’s time to go from day to night, all Lubezki can do is tilt the camera up to the sky and do a time-lapse dissolve. There is admittedly one nifty transition, craning down from Norton and Emma Stone getting it on in the rafters to a rehearsal later on stage, a shot that manages to simultaneously travel through collapsed time and space. Otherwise, I spent much of the movie logging exactly where you could cheat a cut, which isn’t tough: every whip-pan and shadow pocket is a potential tell, including the lengthy amounts of time eaten up when the camera travels through or waits in dark stairwells and empty hallways. (Credit for cleanliness of execution to editors Douglas Crise and Stephen Mirrione.)

2. The most commonly exchanged phrase is “you’re an asshole,” which always seems to be true no matter who’s saying it to whom. This is the movie’s go-to phrase and all its humans have in common, which is depressing and deflating.

4. Roland Barthes. When Michael Keaton is being interviewed by several journalists, one says something along the lines of “As you doubtless know, Roland Barthes once said [insert Barthes quote here].” His delivery indicates he’s a condescending jerk, representing tweedy critic types without a passionate bone in their body. A lady journalist, standing in for vapid celebrity culture, asks who Barthes is and if he’s maybe one of the Avengers, which means that she’s an idiot. So now we know: Barthes has no uses in and of himself. He’s just a litmus test to demonstrate that two people suck in different ways.

5. This is not a credible alternative. Late in the game, Keaton’s “Birdman” voiceover/alter-ego — who’s always urging the star to give in and return to his artless blockbuster past — advises him that no one wants to hear this talky “philosophical shit.” This is a nice way for the movie to congratulate itself (and implicitly its appreciative viewers) for being a gutsy alternative to the tidy, prefab blockbusters dominating screens (The Avengers and Robert Downey Jr. come in for a lot of slagging). But in order to be philosophical you have to have actual philosophy, as opposed to merely peddling easy scorn for big-budget f/x fare and a vague conviction that suffering results in Great Art. If camera movement effectively subs for CGI spectacle, that’s really not any kind of bold alternative, and Birdman comes up short on the rhetorical front as well.