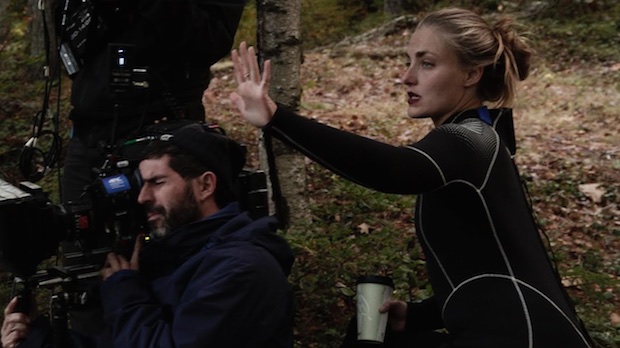 When I first speak to filmmaker Maris Curran on the phone, I’m sitting in the driver’s seat of my parked car about two months after breaking both my arms in a bicycle accident. The accident occurred as I was pulling my bike over to the side of the road in order to phone the editor of this publication to discuss some column ideas I had about the business of filmmaking. I missed that meeting, of course, and since the accident, my mind has been almost singularly focused on the psychological impact of tragic accidents. Since that can get a bit dark for most people, I’m hoping that being out of the house (albeit behind the wheel of a car I can’t yet drive) will help me to switch gears and think more about the challenges and rewards of filmmaking.

As it turns out, I don’t have to switch gears at all, only to consider how they all interrelate. I feel an instant kinship with Curran when she tells me that her first feature film, Five Nights in Maine, is a character drama about the relationship between a Caucasian mother and her African-American son-in-law after her daughter’s untimely death. It deals with grief, mortality, “and race – but not in a Hollywood, Capital R way,” she says. Currently in post-production, Five Nights in Maine stars David Oyelowo (who has just secured a Golden Globe nomination for his work in Selma), Academy Award-winner Dianne Wiest, and Academy Award-nominated Rosie Perez. The film’s centers around Sherwin (Oyelowo), who, devastated by the loss of his wife Fiona in a tragic car accident, travels to rural Maine to seek answers from his estranged mother-in-law (West).

Curran has found that talking about the making of the film encourages people to openly discuss personal stories of grief and vulnerability, and as she’s explaining this to me, I realize she’s completely correct in my case — I am having trouble not interrupting her to share my own story.

“[The film] explores the transformational potential of empathy,” she says. “Film is a way to connect.” I’m especially intrigued by her consideration of the making of a film as a way to connect just as much as the finished product.

Curran’s academically-impressive CV includes a BA from Smith College, an MFA from the School of the Art Institute of Chicago, a Fulbright Fellowship, and a study program at the Whitney Museum. Her most recent short, Margarita, premiered internationally at the Huesca International Film Festival in Spain and in the U.S. at the HBO NY Latino Film Festival. A Philadelphia native who’s lived most recently in Oakland and Los Angeles, Curran has exhibited her short films at galleries and festivals and has produced commercial documentaries, music videos and broadcast spots before and during the making of Five Nights.

Today, we’re discussing a column idea I have – to explore the filmmaker’s greatest challenge on a film and how he/she overcame it. What dawns on me after we first speak is that a filmmaker’s biggest challenge might be different from the best lesson she has to share, so we decide to discuss both over two conversations.

Filmmaker: You’ve employed a hybrid financing strategy with Five Nights in Maine. What has that entailed?

Curran: I think the first important thing is to make a smart budget. How much should your film cost? Does that make sense in the current market place? How much can you lower the budget from the number that “makes sense?” And once you have that number, a number that feels impossibly low, how can you keep the equity portion even smaller? We were able to do that through crowdfunding, generous Cinereach and SFFS/KRF grants, production and post-production tax incentives, in-kind donations as well as donations through our fiscal sponsor. Our goal has been to make the best film with the lowest amount of equity possible.

Filmmaker: What have you learned about financing through this process that might make securing financing easier for future projects?

Curran: For me the same is true for financing as directing: follow your instincts. What does that mean in terms of financing? Essentially, be sure that the person bringing money is the right partner for the film. At the end of the day it is your job to ensure that everyone involved is working toward the same film. That includes the financiers. It also means being savvy – does the person you are meeting with actually have the funds they say they have? And ultimately, it is your responsibility to make fiscally responsible decisions for the film. Sometimes the right decision for your film will mean it will take longer. I discovered new pockets of patience while making this film.

Filmmaker: Financing is often a struggle, but why do you think financing was such a challenge for this particular film?

Curran: It is usually ideal to find one or two investors who can come in for the total equity, but for us, that did not turn out to be the case. In the end, it was for the better of the project. We brought in a group of incredible investors for smaller chunks who believe deeply in the project. They are a reflection of the process of making the film and the community we have formed in the process. It’s an unusual approach, but it ended up being to our advantage.
One other point I’d like to make is that our cast is incredibly diverse. When you cast this diversely, people warn you along the way that you will have trouble with financing, but it is a self-fulfilling prophecy. Independent films like this are not financed on international pre-sales. That can actually be freeing. We need new models of financing that accommodate dynamic and diverse casting. Take the time to come up with a financing strategy that works for your specific film. Cinema is only good when it is as diverse as we are.

Filmmaker: How do you think being a woman has affected your financing strategy?

Curran: People are still afraid to finance films directed by women. They want to encourage us, but when it comes time to invest, they hold back. I think there is a fear that our stories might be good, but they won’t recoup. If you want to encourage more women filmmakers, invest in our films.

Best Lesson: Creating a diverse and inclusive community within the filmmaking world.

Filmmaker: You mentioned that one of the key elements to creating a low-budget independent film is having a “joyful” community. What does that mean, or what does a joyful community in the sphere of filmmaking involve?

Curran: We had an incredible crew of talented and good-natured people. I think having a respectful environment on set is absolutely necessary, but it will only happen if you treat people with kindness. That is not always the norm on a movie set, but it makes the difference between a good and bad experience. People worked insanely hard on this film, but we had fun. Oh, and good nutritious food is also a key ingredient! Feed people well.

Filmmaker: Jill Soloway has said that filmmaking is like throwing a party. In speaking with you, I hear echoes of that sentiment. Would you agree with that? If so, do you think that’s a uniquely female perspective? When I heard her say that, it made total sense to me, but it’s not something I hear male filmmakers say — relating making a movie to throwing a party.

Curran: I understand what she is saying, but it is not an analogy I would use. There should be a sense of urgency in the making of a film — it is about a group effort to make something meaningful and ideally lasting.

Filmmaker: Does your sense of community involve the audience, or are you primarily thinking of the community within creating the film itself (actors, crew, people on location, etc.)?

Curran: When we were first speaking, I was talking about the community surrounding the making of the film. But, because of the ways independent films are made and information is shared, that community bleeds into the audience. So, yes, my sense of community absolutely includes the audience. As we were making the film, we were constantly putting ourselves into our audience’s seats, saying: “I have not seen this before and it excites me.” I think that will translate to the audience.

Filmmaker: You mentioned that discussing Five Nights in Maine it is a way to connect to people — that it “opens the door to talking about vulnerability and grief.” I found this interesting because as you gave me the synopsis, I felt a bit compelled to tell you my own story of loss. Connecting to people in this way — how does this translate once you aren’t speaking to people directly? The film not only has to deliver this message without your physical presence, but it also has to find its audience. How do you plan to do this?

Curran: This is an adult film. It is a film about real people struggling and coming together. I know that as a filmgoer, I ache to see more films that reflect the challenges and joys of everyday life. It is a film for people who want that experience. And it is a film to see with someone — to sit in the dark and leave talking and ideally, sharing. It is something that has happened spontaneously throughout the process of making the film, so I hope it will continue.

Maris Curran is currently in post-production of her first feature film, Five Nights in Maine, starring David Oyelowo, Dianne Wiest and Rosie Perez. Five Nights participated in IFP’s No Borders International Coproduction Market, Film Independent’s Fast Track, received a Cinereach Grant, a San Francisco Film society KRF grant, a Panavision New Filmmaker camera grant and was selected as one of ten international projects to develop at the Cine Qua Non Writers Lab in Mexico. She has exhibited her short films and videos internationally at galleries and film festivals and produces commercial documentaries, music videos and broadcast spots. Maris’ recent short, Margarita, premiered internationally at the Huesca International Film Festival in Spain and in the US at the HBO NY Latino Film Festival. Maris uses film to delve into the drama of the everyday and to tell stories that take on challenging issues such as race, disability, illness and sexuality. She received a BA from Smith College and an MFA from the School of the Art Institute of Chicago, where she received a Princess Grace Award for her thesis film. Maris also participated in the Whitney Museum of American Art’s Independent Study Program and was a Fulbright Fellow.