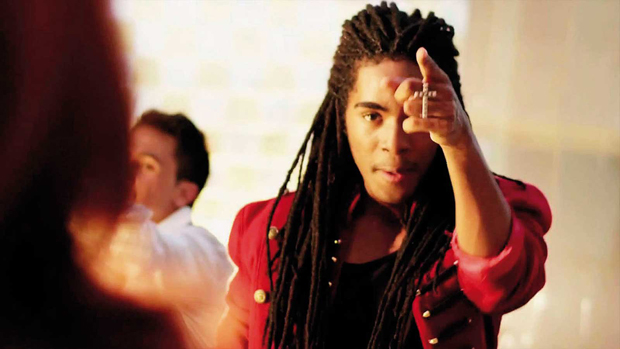 Outside the avant-garde world, shorts are rarely granted extended critical writing — it’s hard to justify the expense of covering these hardest-to-see of items, confined as they often are to festivals and specialized screenings, so it’s up to salaried editors like me to step up when possible. (Making this my first piece about True/False 2015 may be straining to make the point, but I can live with that.) Case in point: Benjamin Pearson’s Former Models has been in circuation since 2012, but written information besides the broad outline is hard to find. In part, that’s due to the short’s sheer density: the simplest way to describe this — a fantastical biography of Milli Vanilli’s Robert Pilatus, i.e. “the one who killed himself” — eliminates its argumentative byways and additional layers.

A prologue appropriates consumer-grade video of a plastics factory, its tonalities an ambient hum slowly clarified and reduced into a pure F-major chord, transforming the industrial apparatus into a producer of music. (Another interspersed thread buttressing that argument comes in thoughts from Andy Hildebrand, inventor of the seismic-wave detector that inadvertently birthed AutoTune. Pop music is the ghost in a machine that autonomously evolved, with humans wrestling the gears to create self-expression within automated norms.) “This is where I was born,” croaks one of those unnerving auto-read computer voices — Pilatus speaking, reimagined as a decorporealized manufactured entity eternally living on. Vocal counterpoint is introduced with the voice of technology: “white, female, urban,” reassuringly cool and observing itself to be vaguely sexual.

In four parts after its technological prologue — “Labor,” “Love,” “Loss” and “Planned Obsolescence” — Pilatus’ sad story is reimagined, with Vanilli’s very ’80s videos explained as performance art pieces about “negotiating space” and other academically-phrased concerns. (No surprise that Pearson is on the faculty of the School of the Art Institute of Chicago.) Pilatus retells the Vanilli saga as a wild saga of corporate cloning through plastic technologies. “We were mediated aggregates,” he recalls in an interview with a sympathetic interlocutor — a state true for industrial techniques, pop music and pretty much everyone with access to technology.

Some of the audience snickered at the datedness of Vanilli’s stage-leaping antics and hoarily-aged videos, and one person’s reaction — “The ’80s, wow” — points to the worst possible version of this short. Instead, Former Models builds to a truly eerie climactic rise, with the calm female narrator repeating “All bodies are extended” over and over, the last word clipping off, until the sentence is reborn as “All bodies are expended.” That’s planned obsolescence: our bodies are Borg’d by technology, then discarded by nature. It all sounds very theoretical, but it played like gangbusters, and it’s surprisingly moving.

Former Models was the opening bookend of the “Girl You Know It’s True” shorts program; the closer, Elizabeth Price’s The Woolworths Choir of 1979, takes the comparatively rarefied Shangri-Las song “Out on the Street” as its musical base. The winner of the 2012 Turner Prize, Price’s short begins with an isolated and attention-getting handclap sharply ringing out on its own, each instance cuing a new image. Piece by unhurried piece, Price identifies the individual components of medieval church architecture: trefoil, quatrefoil, choir. While fleshing out her onscreen-text lecture and building the church up to a unitary whole with computer animation of the layout and examples of each isolated point, Price introduces the eerie a capella opening eight seconds of the Shangri-Las’ song, bulking up the soundtrack as the whole of the church comes together on the visual side.

The last point Price has to make regarding the churches is about the gisants — carvings of the recumbent dead embedded in the church floor, each with a twist in their wrist. Their purpose is unknown, but it’s this shared fillip that gives them the semblance of life in death. At this point Choir completely explodes, cuing the whole song (more massive than it would be after the comparative isolation of its smallest rhythmic components), repeatedly zooming in on the Shangri-Las’ own wrists in the same position. The text — previously white,  reserved, static once it’s typed out and uniformly sized — explodes into flaming red letters whose size bloats and shrinks. “We are trefoil, we are quatrefoil, we are chorus,” is the unexpectedly thrilling anthemic formulation, and then there’s the twist: “we’ll show you how it went up, how it all went up right here in a matter of minutes.”

The music retreats again to isolated handclaps backing the delineation of another space, this time a Woolworths in which a 1979 fire killed ten people, trapped by bars in the department store windows and felled by cyanide odors unleashed by burning architecture. It’s worth reading this interview with Price to get a better handle on the “memorializing” aspect of her work, and Michael Sicinski on the gendered aspects of this last section. I can’t follow this part of the film’s argument that well at first pass, but was thrilled by its unfolding as it builds to a final crest. The analogous architectural components of the church and store are drawn together both intellectually and viscerally, the music exploding once more in memorium of lives lost.

Jason Tippet is the co-director of the lovely Only the Young, which premiered at True/False in 2012. That portrait of California skater kids who evangelize for the Lord was distinguished by Tippet and co-director Elizabeth Mims’ impressive ability to seemingly never repeat an immaculate shot set-up in even the most returned-to locations. From the opening shot My Gal, Rosemarie shows Tippet hasn’t lost his eye for finding strong compositions in domestic spaces, opening here with a hanging hummingbird feeder viewed from directly below, a defamiliarized circle with birds floating weightlessly around it. This is the home of Ray and Rosemarie: the latter, age 90, finds the prospect of living in a nursing home with people older than her absolutely untenable. She’s in no position to dispute with her comparatively younger husband, which means his quasi-hoarding habits run a bit amuck. Tippet locates compromised bliss in a shadowy space of cat-occupied dirty couches and — even more unlikely — the sight of zoned-out Ray watching Windtalkers on AMC, an oblique memory tunnel back to his WWII experiences. Out of the glare of sunny LA, there’s real affection here that’s not overegged. Routinely excellent shot compositions set this apart, plus a trip to In-n-Out for Rosemarie’s birthday, where an argument over the burgers’ merits prompts Ray to claim Subway’s better because you can get roast beef and pulled pork there. “Yeah, but who enjoys that?” asks Rosemarie. I’m with her.

Edward Lawrenson and Pia Borg’s Abandoned Goods is more or less in the “hauntological” pocket, complete with narration from psychogeographer Iain Sinclair. Between 1946 and 1981, the inmates of London’s Netherne Hospital produced thousands of works of art. 5,000 survived and were transported to better archival conditions at the co-directors’ expense, as Lawrenson blogged here. These works are recorded head-on on film; the occasional flare-outs at reels’ end confirm what the surviving grain in a digital transfer made me suspect. Sinclair reads out catalogue numbers, the materials each piece was produced on — from burnt match on toilet paper to more conventional painting and sculptural materials — and, if known, the names of the artists. Stories of the institutionalized are interspersed with archival footage of them, doctors discussing how little we understand the causes and treatments of mental diseases (and, attendantly, anything about ourselves at all), flat HD footage of the present-day abandoned grounds and the works’ recognition at a French exhibition of the always-troublesome “outsider art” category. There’s an inherent, indefinable offness to this unsensational presentation of bizarre artworks which flatten perspective and present indecipherable, obsessive motifs — objects which have been found and re-presented, but which we can never truly get inside.