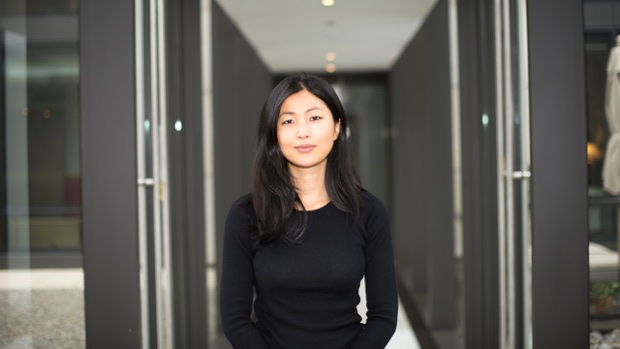 by Elaine Sheldon and Sarah Ginsburg
in Filmmaking
on May 6, 2015

Linda Pan discovered her way into media after traveling down a vastly different path for several years. Linda, the first-generation daughter of Chinese immigrants, was raised in Saskatoon, Canada. Her parents persuaded their daughter to follow a path similar to theirs: electrical engineering. So she did. But ater two engineering degrees and a handful of hard family conversations, Linda talks about how she transitioned from electrical engineering to media business, attended Harvard Business School and climbed the ladder at MRC and Netflix. Today, Linda is the general manager of Sundance Now Doc Club and Vice President of Business Development at AMC Networks. Similar to Netflix, Hulu and Amazon Prime, SundanceNow Doc Club offers a place for both longtime documentary lovers and those new to the genre to stream classics and new releases. Learn how Linda, your video clerk on the Internet, curates and stocks the shelves and makes the business decisions behind what the new streaming service offers.

The Best Way To Develop Your Voice Is To Speak Up
In my years of working with all different types of people, airtime is not equivalent to thinking time. Sometimes you just need to be heard and say something. You don’t need to over think it, overanalyze it. It’s just important to tell people how you think. And over time you become comfortable putting your voice out there and developing your own style. The most important thing is to just speak up. That was not natural to me. I felt like I needed to have the right thing to say, I needed to have the thoughtful thing to say. I’m not advocating for people just to speak up and say whatever comes to their mind, but I think with a lot of women tend to overthink and want to be overprepared when probably you’re fine. Just put it out there.

Lessons Learned at Harvard Business School: Everyone Has A Different Finish Line
I was so excited to go to Harvard Business School. Harvard, for me, was the most recognized business school brand in the world — there was a cache to those three letters, “HBS.” And in a lot of ways it lived up to my expectations. But ultimately my biggest lesson was realizing that there weren’t groups of people out there that knew all the answers — groups of smarter, more high achieving people with different backgrounds that they knew their way in life and that somehow I needed to catch up to. This elite group in my head didn’t exist. We’re all trying to figure out what we want to do with our lives. And that was really comforting. To feel that there isn’t that race to get to this finishing line. Because we’re all trying to figure out what our own finishing lines are. Even at, Harvard Business School. I like that a lot. It was very freeing to not have in the back of my mind.

Lessons Learned at Netflix: Be Bold And Cut Out The Noise
When I joined Netflix, in June 2011, the stock price was over $300. By July they had announced they were splitting the DVDs from the streaming service and the stock was at 75 going down to 50. That’s a really large tumble. You couldn’t go anywhere across industry trade, business trade, general consumer coverage, there was so much just noise about the company. But it was great to see it from the inside; they were so calm. They knew what they wanted to do. They knew that they really should have positioned it better, but they didn’t let it get to them. That’s really important, to be able to cut out the noise. There’s always going to be noise, especially in media. Just being able to just focus on what you’re doing and being able to put those blinders on. I felt like, “Wow this is a different kind of company.” It’s a company that isn’t afraid to trust its own instincts. At Netflix we used to say: beyond bold. What you think is bold, think one step beyond it. And when you can execute as well as they do, that’s a great philosophy to have.

Curation Is Key With Digital Distribution
The thing with digital distribution is, it’s infinite shelf space but people are still really only going to look at your top ten shelves. So how do you program those shelves? We’re neurotic about how we’re stocking our shelves, and we think about the doc fan, first and foremost, so that’s a very different mentality to think about this digital store. And we’re the ones who are the video clerks. People’s behaviors are shifting and changing so we’re constantly iterating to see what’s working, what’s resonating, what doesn’t work. And that’s a role of a distributor. So being able to work with the medium, which is now a website and ten apps, and to make that a good experience, that’s what we care a lot about it. It’s kind of like our little video store that exists in the cloud.

Being a Business Woman in Entertainment Has Its Pros and Cons
This is a broad generalization, but in entertainment in Los Angeles, there’s a lot of aggression, like male aggression. I would be in rooms with agents, lawyers and my bosses and there’s a lot of posturing. It kind of feels like you’re watching Nat Geo; watching the wildebeests signaling. And I think as a woman you can be aside from it, be apart from it and it’s an advantage. I was able to not be wrapped up in the who’s got the bigger…ya know. In a way, some men aren’t as threatened by women and there are cons and pros to that. But in those situations, I was able to take a leadership position, even though I was a junior person, because I did something that was very different from what other people were doing, and then two, I was less threatening.