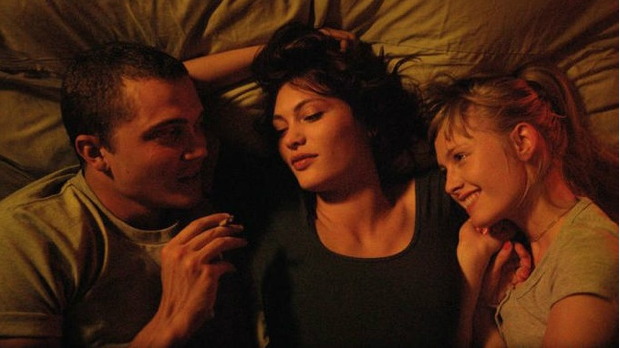 That’s roughly the extent of this conventional story’s depth; it’s a heart-swelling, sadly heteronormative romance (between its homophobic slurs and one moment of trans-sex panic), preposterously conveyed by pretty, uncalibrated performers whose lusty characters are one-dimensional yet needlessly shot in three. Michael Winterbottom’s 9 Songs fared slightly better in covering this sweaty ground, but at least Noé brings occasional technical bravado; nightclub lights take on dazzling new freshness thanks to the brilliance of his regular cinematographer Benoît Debie, with clever “blink-shot” match cuts co-edited by Dennis Bedlow. In the end, it’s hard to say what’s more of a money shot to our collective faces: the actual and inevitable CGI-enhanced version of that very image, or indulgently naming characters “Gaspar” and “Noé” (himself, in a sleazy cameo) as obvious stand-ins for the Argentine-born provocateur. Oops, there goes that word again.

There’s slightly less nudity but just as many banal “profundities” uttered in Paolo Sorrentino’s Youth, a languid yet stylishly photographed ode to fading with grace. The Italian auteur’s follow-up to his Palme d’Or-winning The Great Beauty relaxes chicly at a luxury hotel in the Swiss Alps, where two aging, life-long friends — retired, renowned composer Fred (Michael Caine, an awards-season potential) and desperate-to-remain-relevant filmmaker Mick (Harvey Keitel) — reflect on their legacies, passions, and the ever-creeping distance from their titular yesteryears. Fellow guest and highbrow actor Jimmy (Paul Dano) finds camaraderie with the men as he’s frustratingly best known for playing a populist-friendly robot, just as Fred may be only remembered for his early “Simple Songs,” which he now refuses to conduct for the Queen’s Royal Command. Sitting alongside them in the sauna is Fred’s daughter and assistant Lena (Rachel Weisz), who has become a bawling mess after being dumped by Mick’s son for real-life pop star Paloma Faith (playing herself yet still embarrassing).

If 2009’s Sean Penn-starring This Must Be the Place proved Sorrentino to have a clunky ear for the English language, Youth further establishes how it takes a terrific cast to smooth over his lost-in-translation ineloquence. Even so, nothing new or particularly poetic is pontificated regarding our inescapable shove off this mortal coil, regardless of the self-congratulatory air in its purple prose and easy jokes about prostate worries. Sorrentino has always been stronger as an aestheticist than as a writer, and what makes Youth watchable despite its lackluster ideas is its occasionally voluptuous embellishments, such as Fred imagining he’s conducting a symphony of cows in a field, or an obese footballer with a Karl Marx tattoo keeping a tennis ball in the air with his feet and gut.

Jane Fonda also makes an impressive last-act appearance as the former ingénue whom Mick has been working with his screenwriting team to craft a testament to, but even her ball-busting monologue — in which she proclaims “Television is the future” — is diminished by one final image of her as a wailing, hot mess. Sorrentino not only flattens his own dynamics by pitching every single scene at Maximum Epicness, but worse than that, keeps flexing a casual sexism in his films; Weisz is heartbroken because a man told her she’s no good (her only comeuppance is rebutting that she’s a dynamo in the sack, as if that’s her only validation as a partner), and even after a Miss Universe winner (Madalina Diana Ghenea) surprises the men with her intellect, it’s only when she later disrobes and steps into a pool that she’s allowed to wow as the camera’s male gaze lingers.