Sony Shrinks the FS7, Announces PXW-FS5 and the a7S II 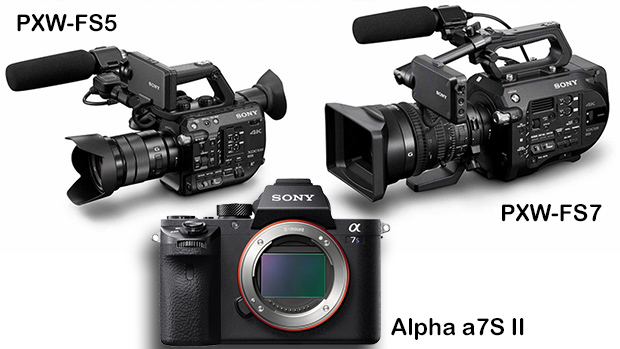 by Michael Murie
in Cinematography, Filmmaking
on Sep 11, 2015

Today at IBC Sony announced a smaller version of their popular PXW-FS7 4K camera. The PXW-FS5 takes most of the features of the PXW-FS7 and shrinks them into a box that’s less than half the weight and almost one quarter the volume. While it takes away some features — there are fewer recording options, no extension arm or LCD loupe — it does include an interesting new feature; an electronically variable ND filter that lets you select any position between 1/4ND and 1/128ND with 128 steps. Adjustment from one level to another should be fairly smooth, enabling you to adjust exposure while shooting using ND adjustments, rather than adjusting the iris. 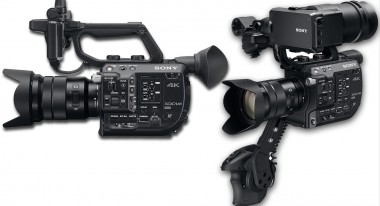 The camera reportedly uses the same sensor as the FS7, and will offer 14 stops of dynamic range, but records to SD cards rather than the more expensive XQD cards. There are two slots, allowing either simultaneous or relay recording. To support the SD cards, the recording format is XAVC-L, which offers 10-bit 4:2:2 in HD (up to 50 Mbps), but only 8-bit 4:2:0 in UHD (100 Mbps). Sony says that a RAW output option will be available later.

Base ISO is 3,200 and it goes up to 32,000. Other improvements include improved auto-focus with face detection. The handgrip first seen in the FS7 has been redesigned, though they don’t include an extension arm; you’ll have to add your own.

Frame rates of up to 240 fps are possible in HD, with a maximum of 960 fps with reduced resolution. A digital zoom adds 2X magnification in HD, or 1.5X in UHD. The Center Scan Mode outputs 2160 x 1080 from the sensor’s center to support Super 16mm lenses.

The camera will ship as a world camera, supporting recording in PAL and NTSC frame rates. Output interfaces include 3G-SDI and 4K HDMI, and the camera can also output to Wi-Fi and wired LAN terminal.

a7S II
Hot on the heals of the a7R II, Sony has announced the a7S II. Like the original models, the a7S II shares much in common with the a7R II model, the primary difference being the sensor. The resolution of the a7S II sensor is much lower (12.2 MP vs 42MP), which makes the sensor much more sensitive to light. It also means that the 12.2 MP sensor is almost the same size as a 4K frame, avoiding the need for pixel binning and reducing moiré. The a7S II also adds S-Log3 Gamma and S-Gamut3.

If you’re interested in the a7 family, the a7S II is the camera to get if you’re shooting video, while the higher resolution a7R II is for those primarily interested in stills.