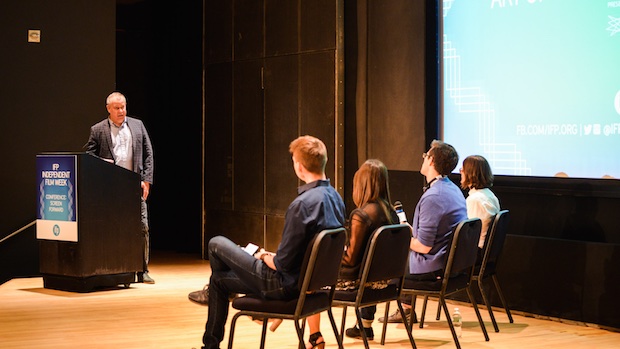 by Scott Macaulay
in Festivals & Events, Filmmaking, Financing
on Sep 21, 2015

The on-stage pitch has become a staple of documentary film forums, like IDFA and CPH:DOX, and pitch panels long ago snuck into events like IFP’s Screen Forward Conference (previously the Filmmaker Conference). But the on-stage pitching of web series is something relatively new at these more film-oriented events. Befitting the IFP’s conference name change, three filmmakers storytellers took the stage Sunday at noon at the Bruno Walter Auditorium to impress a panel of web content professionals with their ideas of episodic tales to be streamed online.

But given the Wild West nature of web series, where buyers, monetization strategies and filmmaker goals are all in flux, was the format a useful one? Were the filmmakers on stage perfecting a performance they’d likely do somewhere down the line to actual buyers? Or was the panel’s aim more rhetorical, to enable a dialogue about how we should think and talk about web series?

My opinion at 12:45PM — a little of both. Whereas a filmmaker pitching a script in Hollywood to industry buyers will be sharing with those buyers a set of assumptions — the film will be between 90 and 120 minutes, will have a certain budget, etc. — those pitching web series will be defining both the format as well as the content of their proposed series. That’s just one of five takeaways from today’s panel.

1. Define the format. “In this format, there’s no standard,” said judge Adam Goldman, creator of the web series Whatever this is, in response to a pitch by filmmaker Marty Shea. Shea’s series is A Billion to One, an ambitious, collaborative project in which episodes feature different people who want to change the world. The pitch started off by making it seem like a game show, said judge Ingrid Jungermann (writer/director, F to 7th), but Shea responded by describing it as “somewhere between a corporate drama and a Dickensian story.” All the more need to spell out precisely what the show is, all the way down to details like the number and length of the episodes, said Goldman.

2. Use Comps. Also in response to Shea, Randi Kleiner, CEO of the episodic festival SeriesFest, said there is nothing wrong with using comparisons. The panel remarked that Shea’s series, which will have different central characters every week, could be compared in that way to the well known web series hit High Maintenance. Shea said he’d never have thought to make that comparison, but he could see it. “Don’t feel you need to have the original idea,” said Kleiner. “Everything is built off of something else.”

3. Make clear your personal connection to the material. If there was one piece of advice that spanned all three presentations, it was this one. A creator pitching a web series must explain “why you are the perfect person to pitch this idea,” said Josh Poole, Director of Development at Broadway Video’s Above Average. This was in response to a polished pitch by Patrick O’Donnell of a web series about a single thirtysomething woman who decides to travel cross country to visit an ex-boyfriend after finding an unlistened-to mixtape by him. O’Donnell’s pitch was well received, but when he responded to Poole by answering that he’s a musician who used to own a small label, has plenty of connections in the indie music world, and has thought a lot about the relationship between music and emotion, everyone told him he should have put this in his pitch. “A lot of times people think they have to have all this information in there,” said Jungermann, “but it’s really just about connecting.”

The panelists had similar comments to James Martin, whose web series Monica is about a loner high school girl who is suddenly revisited by her childhood imaginary friends — a purple monster, penguin, monkey, and rat — while in college. It wasn’t until his pitch was over and he was subjected to questions from the panel that he revealed his lifelong love of the work of Jim Henson and his participation in a puppet workshop. Those references immediately addressed production concerns as well as connected his own passions to the series. “We’ve hit upon a richer vein here,” said Goldman.

4. Be specific about your goal. Web series are everything these days from commercial endeavors to labors of love. Again, someone pitching a network series is targeting a specific commercial form. Not so with someone contemplating a web series. Said Goldman to O’Donnell, “What is your goal? Web work is not judged same as TV and film. Do you want to be picked up by TV network or just say, ‘This is something I made.’”

5. Know the span of your series. Martin gave a detailed pitch about his Monica, explaining his heroine’s high-school years, her various social issues, and her relationships with her imaginary friends. But the storyline contained in his pitch ended just as the series would begin; in other words, his pitch was all backstory. Poole pressed him to explain where the series would go and what actually would transpire during the first season. Similarly, in O’Donnell’s pitch, Klein asked the director what would happen after his heroine reaches L.A. and then in a second season. Summed up Goldman after Shea’s pitch, “I think stories are given meanings by your endings. Know your ending.”

Still after the panel, I couldn’t help but wonder just how formalized the market for web series pitches is. I bumped into Shea, who is currently a member of the IFP’s Made in New York Media Center, and asked him his experience out in the field. “The range of what a web series is is so undefined,” Shea admitted. Yet, he did have one meeting at Vimeo recently, he said, and he asked if he could pitch them a series. “They said, ‘Your best bet is to release something, get over 100,000 views, and then they’ll start paying attention to it and fund it. But, [we] do listen to pitches before distribution or before you go into production.’”

Shea concluded, “So, yes, I think it is possible. This kind of thing — [successfulyl pitching a web series] — can happen and does.”