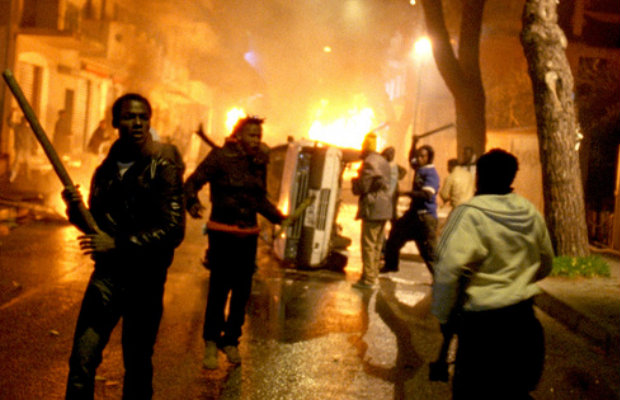 A crushing scene in the intense Mediterranea, the first feature by New York City native Jonas Carpignano, exemplifies the nearly unbridgeable chasm that separates recent black African migrants from their reluctant white hosts in contemporary Italy, where the filmmaker has lived for the past five years. Ayiva (Koudous Seihan, an immigrant himself and currently an advocate for migrants’ rights), the single father of a seven-year-old daughter and a recent arrival from Burkina Faso, rides in a truck driven by his boss, Rocco (Davide Schipilliti), on whose estate in the Calabrian town of Rosarno — near the toe of the geographical boot — he works the orchards, and whose trust he gains by picking and packaging the most presentable oranges quickly and efficiently. Paternalistic though it may be, the relationship extends Ayiva a minor place in Rocco’s extended family.

Ayiva tests the waters. He meekly asks the chief to sponsor him for papers that would allow him to stay and work for longer than the three months he was automatically granted upon entering the country. In a hushed tone, Rocco recalls his grandfather, who went to New York decades before and, when times got tough, asked for and received help from family members. “That’s how it should be,” he adds decisively. He hands him some Euro notes and asks him to work his young daughter Marta’s birthday celebration. Lacking even an iota of propriety, he hasn’t a clue how condescending he is.

Flaws abound when you peel away Rocco’s rationale. Today’s economic migrants do not include so many relatives. Like most newcomers, Ayiva travels without kinfolk, to whom he is expected to assist with remittances. Instead, he makes the trip with his dour, unenthusiastic friend Abas (Mauritanian-born ex-model Alassane Sy) — an arduous journey through the scalding deserts of Algeria and Libya, where robbery and general ripoffs are the norm, then across the treacherous Mediterranean, barely hanging on to the skeleton of their sunken boat before reaching Italy.

They are led to a concrete holding compound by a starchy military officer, registered, and let loose to fend for themselves in a foreign land. They bond with old friends and rapidly make new ones. While they all walk happily together down the highway, a car swerves in a failed attempt to mow them all down. It’s a swift intro and reality check. Benvenuto al’Italia!

The new arrivals are destitute. None of these otherwise generous guys — surrogate relatives who help him and Abas settle into a mouse-infested tent city — has money to spare. The economic situation has declined in this part of southern Italy. The labor market in the agriculture industry is controlled by the ‘Ndrangheta, the regional Mafia. Low wages and long working days are the rule; pity the man who challenges the standards. A strict, cumbersome official bureaucracy and the institutions that support it stifle any progress the migrants might make. A corrupt, racist police force insures that the status quo remains unthreatened.

Three or four generations back, the impoverished, mostly illiterate Italian immigrants, who occupied the lower rungs of the socio-economic ladder in the States, communicated with their families back home via slow-moving mail, allowing some time to try to ease their hardship. The Africans are also seeking more lucrative employment than was possible at home. With the advantage of digital technology, they have a better idea of what lies on the other side than the Italians did. The truth is clearer now. Communication devices, which have drastically altered the sense of time, enable the migrants to instantly contact the folks back home. Skype, Facebook, cell phones, and their ilk are essentially characters in the film, oft-used tools in a revisionist, global pattern of migration.

Race is, of course, a major differential. The earlier waves of immigrants and their American employers were all white. Blacks in Italy are a relatively novel social group, other to the Italian bourgeoisie and peasantry alike. There is almost no black middle class. The newcomers don’t just join the lower echelons of stratification: They get stuck there. Rocco, like many of his compatriots and their reckless children, is impaled on an anachronistic model. The narrative passed on by his migrant grandfather and the uncles and cousins who stayed behind remains the same after all these years, no matter that the players and the demographic diverge tremendously.

The current generation avoids facing the facts: TV, daily newspapers, and the internet flood them with more than enough information to correct their distorted perception. I imagine such blindness makes it easier to live in a society that prospers on the backs of laborers whose working conditions are not far above those of indentured servants — isomorphs of slaves, in fact. 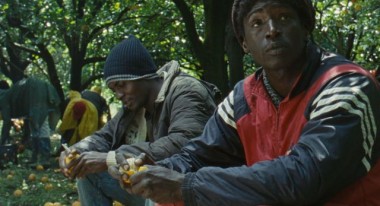 No longer the exploited but rather the exploiters — the perps — do the Italians not see that the egregious excesses of an earlier African diaspora are just being updated, and that they are implicated in the system of paying subsistence wages? You can’t help but ask if there is what a cynic might call a preordained timing of release, given what we are now seeing in Europe, with hundreds of thousands of Syrians, other Middle Easterners, and Africans hiking overland and risking drowning at sea to better their lives by escaping the dangers of war’s excesses. I believe that Rocco’s affection for Ayiva is genuine. At the end of the day, however, the drone is riding in the back of the bus.

Carpignano has successfully fused several genres without the mess and forcedness that sometimes accompany such efforts. The fundamental one is the migrant road movie. Ayiva’s entry into Rocco’s household opens the doors for the family melodrama, bratty Marta playing a pivotal role. The film is also a morality tale, observing Ayiva’s battles with transgression, even if it is born of the good man’s desperation and interior struggle between personal survival and collective progress.

Continuing the genre menu: The cold but contained contempt the cocky Italians have for the “declasse” Africans resembles a nonviolent Crusades epic, if we slightly alter the pieces on the chessboard. That changes. After the police suddenly evict the migrants from their makeshift living spaces, which are then burned, mean-spirited local young men get revved up by the Africans’ unexpectedly assertive response, which then morphs into a southern Italian version of a spaghetti western. The nasty war that ensues between the youths and every African they see, with beatings and killings of the latter well orchestrated and protected by the carabinieri, contains a regular western trope: Vigilantes protect their settlement from the Indians. I admit this is a stretch. “Stop shooting blacks!” rather than a yelping battle cry is the defenseless Africans’ chant of choice.

In spite of the mindless hatred and violence, Carpignano gives credit to the upside of the other driving genre: the social-issue drama (though it is difficult to separate the generic strands). The humanitarian impulse stems primarily from two Italian women — one a social worker/teacher, the other a kind old maternal figure called Mamma Africa — who defend and provide the equivalent of familial aid to the visitors most of the other townspeople have such contempt for. This is about all the positive affection and care they receive in this at best innocuously abusive, at worst openly hostile traditional milieu. Thankfully, a strong sense of brotherhood exists among the fellows, who sometimes gather with the women to hang out, laugh, and, most important of all, listen to their beloved Rihanna. Sadly, Italian men drop in and break up the festivities, paying the females for sex and, in the process, humiliating the males.

Carpignano does provide moments of humorous levity, mostly with atypical children, themselves outsiders. Marta tests the good-natured Ayiva, repeatedly toppling the fruit he packs in crates. A precocious, streetwise young Gypsy hustler, a businessman wannabe, plays and talks tough, emulating the mobsters who live nearby and quite possibly characters he has seen in movies. As a foreigner, Ayiva offers us entrée into some of the odd behavior that locals would probably not even notice. The occasional scenes with these delightful kids — human motifs — are like columns that provide structural support for the primary story lines. 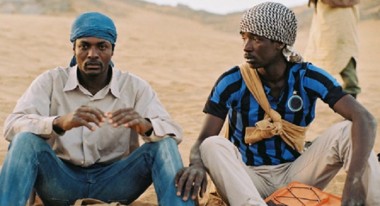 A more conventional motif is a small MP3 player that reappears, at first for no apparent reason. It turns out to be a material version of Ayiva’s entire passage, from the moment he finds it in a suitcase he has stolen in a weak moment, to the repeat visits to the little hustler’s set-up and a Moroccan’s second-hand shop, looking for the right charger. He sells the player, then buys it back, leading to a brilliant payoff that sums up the inconsistencies he has endured. Backed by a concoction of truths and lies, it provides a golden opportunity to make the best of a bad situation.

Stylistically, Carpignano borrows from Italian neo-realism. He uses non-actors and shoots in places where actual events took place, like the Rosarno riots of January, 2010. To get to the core of the migrant experience, he chose not to base his screenplay solely on interviews, but to make the three-week trek himself, in their company. He makes the viewer earn the right to watch the film. He often jumps from sequence to sequence, deploying something like an extended jump cut. Connections are sometimes made within ellipses, without having to depend on simpler exposition.

Not counting desert scenes, much of the film is shot at night. This makes sense for a story about people who live in the shadows and, second-class residents that they are, work all day. Most of the movie is photographed (by Wyatt Garfield) with a handheld camera, the effect sometimes as disorienting as the unfamiliar daily grind the migrants barely get through.

In a smart, dramatically keen move, Carpignano alters the aesthetic when it serves his purpose. He captures the strikingly lit storm that topples the boat Ayiva drives (by default) from Libya, then, from underwater, the inert but beautiful floating bodies of those who did not make it. The street battle between cops with shields and unarmed migrants becomes a jumble of color and movement, a vaguely outlined dance, art built out of chaos and brutality. Without ruining anything, such abstractions guide the narrative in a particular direction, the principal themes and form coming together to point to…No, this you must see for yourself.