“All My Characters Are Like Buster Keaton”: Corneliu Porumboiu on The Treasure 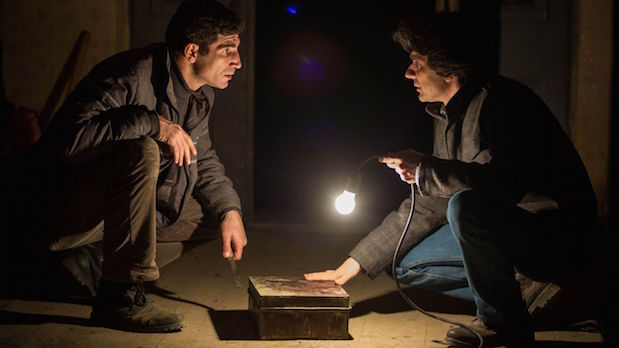 Corneliu Porumboiu is the most drolly despairing filmmaker of the Romanian New Wave. His previous narrative feature, When Nights Falls on Bucharest, or Metabolism, followed a director in the middle of production breaks off an affair with his lead actress while exasperating his patient producer. The opening shot is the director discoursing pedantically on the merits of celluloid; the movie was itself shot on film, and the joke is that this opening shot lasts exactly as long as one reel — deep drollery indeed.

Following 2014’s one-off experiment The Second Game (in which Porumboiu and his dad watch a VHS tape of a Ceaușescu-era soccer game the father officiated), the director has produced something roughly like a crowd-pleaser. The Treasure follows two men as they dig up a garden looking for alleged buried treasure; the direction that the film goes, if not necessarily a happy ending, is a surprise, culminating in the showiest camera movement the normally static-shot-oriented Porumboiu has ever attempted, a corkscrew crane ascent into the sun to the backing of Laibach’s “Life is Life.” To say more would be a shame, but the film represents some kind of artistic breakthrough for Porumboiu, his characteristic precision and discipline hitting a new apex of delightfulness that withholds less than usual.

What’s below is, frankly, not a great interview: Porumboiu speaks English, but not easily, and there was no interpreter, so it was tough going for both of us. It is what it is.

Filmmaker: Do you do a lot of color correction?

Porumboiu: Yes, of course. We had a little bit of a problem at the beginning with the gray wall, and we had a small problem with saturated colors at one point. I spent two weeks in color correction. The inside gave me more trouble, in the [protagonist’s] apartment, because we were quite close to the wall and didn’t [capture] the contours. I told my DP, “I want to feel the artificial lighting in the interiors.” We made tests with 35mm and digital before. Even for the walls, we tried different paintings, different tones of blue and gray.

Filmmaker: When you were shooting When Night Falls on Bucharest, or Metabolism, did it occur to you that that might be the last time you might shoot on film? To some degree, that’s what that film is about, but it makes sense to shoot this on digital, since you’re shooting a lot outside at night with single-source lighting.

Porumboiu: For the character in Metabolism, it was a kind of limit or excuse. Here, I chose digital because we tested 35mm and digital, and I liked the look and presence of the garden more on digital. The digital has a certain kind of materiality; you can see more details, how it’s broken, the cracks. At the same time, I prefer it for night. I tried it on 35mm and red was dominant. You lose a lot of green. I like the granulation on digital more as well.

Filmmaker: Would you go back to shooting on film for another project?

Porumboiu: It depends on the script. I think I will always try to do both.

Filmmaker: Can you tell me a bit about conceiving the final shot? It’s the biggest camera movement you’ve ever made.

Porumboiu: The movie was supposed to start with a [similar] scene I shot — a panoramic shot with a crane. In the end, I took it out of the film. It was a shot that located the apartment. I was inspired by Rohmer’s Full Moon in Paris. I wanted to have something that showed the limits of the city and then the building. After that, I didn’t like the shot. It was very complicated, with a highway passing by.

Filmmaker: Had you tried large camera movements before and then cut them out of your other films?

Filmmaker: You shot your first two features with Marius Panduru and your last two with Tudor Mircea. What’s the difference like in your working relationships with both? How do you divide the division of labor as far as framing, lighting, etc.?

Porumboiu: Marius was employed during Metabolism, so we didn’t work together. I saw a movie by Marian Crisan, Morgen, that I liked the framing of. I’m quite obsessed with framing, and normally I take pictures during location scouting. I place the camera where you would place it when shooting, and then I make a diagram of the space as you would see it from above. With lighting, we talk about how I want the light. In the garden, I was thinking about the trajectories of the character as a function of the sunlight. So we speak, [the DP] makes some propositions, but the framing starts with me.

Filmmaker: How precise does the blocking have to be for the actors? Do you make them hit certain marks?

Porumboiu: No. I try to give them a certain type of freedom. When they’re rehearsing with objects, I change things from there. There are two types of actors, those who you speak to very technically, and those who are about working in the mood. So it depends on the actor.

Filmmaker: In The Second Game, you say at one point that watching the match is kind of boring, “kind of like my movies.” And then you laugh, and it’s a joke, but it’s not a joke, because your characters are bored or oppressed. For us, it’s funny, but for them it’s just boring. What are the uses of creating the effect of shared boredom? Is that important for the viewer to contemplate?

Porumboiu: Again, I think it’s different for each film. It was important in Police, Adjective. In others, not so much. I think all my characters are like Buster Keaton. They’re very serious in what they’re doing, and myself, sometimes I see that I’m so serious that it’s a type of absurdity. The comedy, I think, starts from here. It’s a very serious thing, but still absurd. To be honest, when I see my movies, I think they have a lot of action.

[VAGUE SPOILERS] Filmmaker: It’s not necessarily a happy ending, but certainly everyone in the audience was surprised that things didn’t turn out horribly. Did you consider another version of this film, where everything goes to hell?

Porumboiu: In the first version of the film, they kill each other, but it was a cliche. It was my first instinct, and I was surprised by myself and this cliche. It was a weird reaction, because a cliche is powerful, but for that to come out first…so after that I changed it.

Filmmaker: Do you think it’s a happy ending?