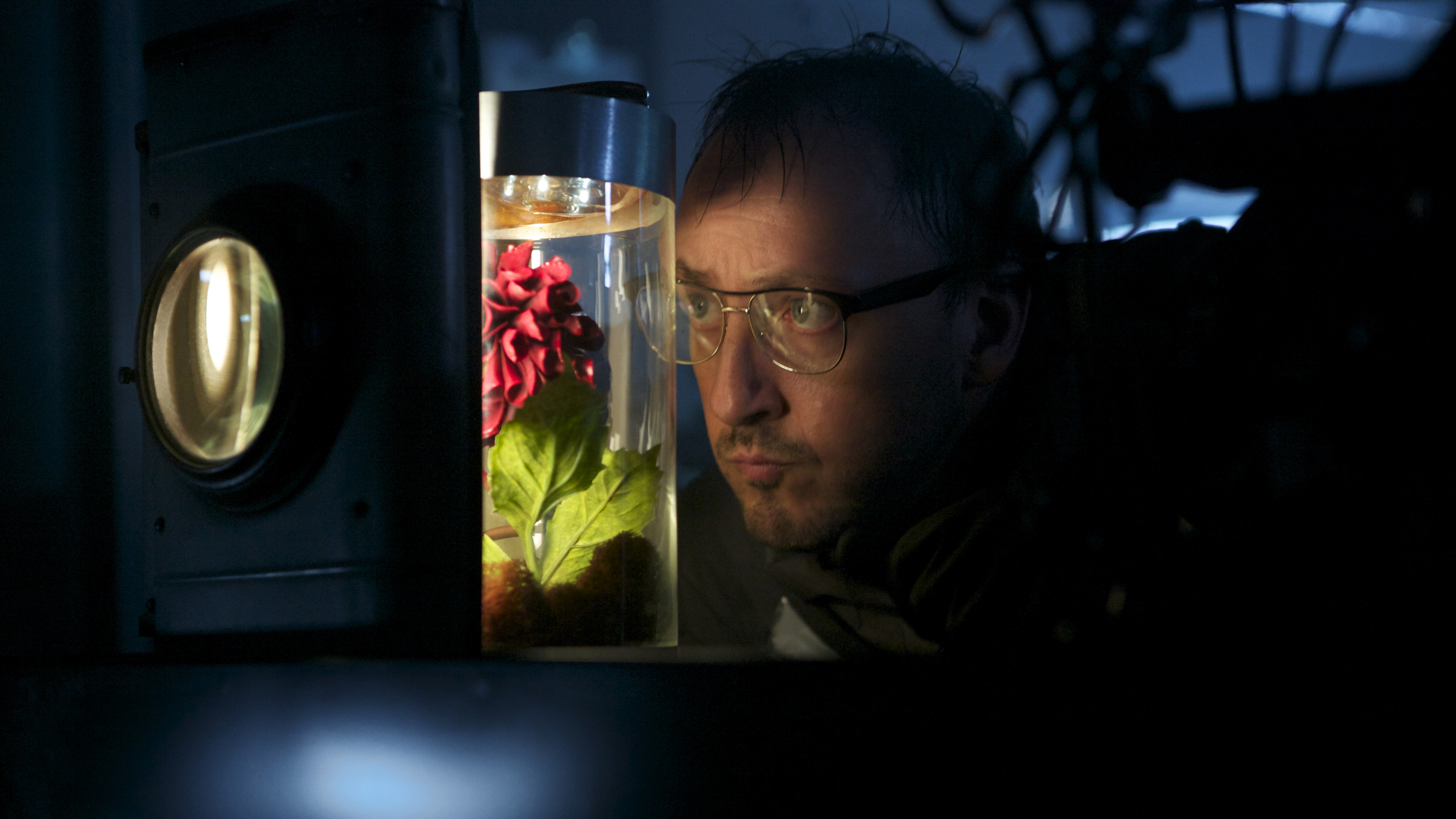 Among Synchronicity director Jacob Gentry’s formidable gifts is a sharpened sensitivity to context, background, and setting that frees him to put in his characters’ mouths dialogue that might seem in the hands of less attuned writer/filmmakers overblown, at best chuckle-worthy in its impropriety. After all, even before being forged into a balanced partnership, these variables are already so complex.

Consider the following line from the film as if it were a stand-alone: “Time is a great teacher that eventually kills all its students.” It does express a truism, but it also sounds, and reads, pretentious. One of several correctives would be surrounding it with inflated language of comparable dramatic weight, what you accept as normal in a Shakespearean tragedy. However he works, Mr. Gentry appears to have a literary bent.

Whether or not it is on display here, he opts here for a heavily cinematic course. He naturalizes this kind of language, corralling it into the everyday, even with a storyline that at first glance appears preposterous. Thankfully, it turns out not to be, thanks to Gentry’s collaboration with theoretical physicist Sean Carroll, under the auspices of the Science and Entertainment Exchange, “to create a synergy between, in the former’s words, ‘accurate science and engaging storylines.’” 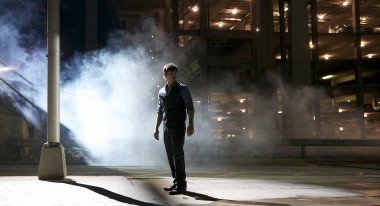 The protagonists are young male physicists, who all lean to varying degrees toward the geeky and the socially awkward: team leader Jim Beale (handsome Chad McKnight), who for complicated reasons acquires the alternative name Jim Prime as the plot thickens; his hirsute bff Chuck (A.J. Bowen), who acts as his deputy; and, completing the trio, bespectacled, reed-thin Matty (Scott Poythress), a science genius with mild Tourette’s who is unable to perform such basics as differentiating between left and right. The three pals race against the clock and impatient venture capitalist Klaus Meisner (reliable vet Michael Ironside) to construct a device capable of folding space and time, opening a wormhole that would enable time travel.

Meisner not only funds this collective project of a younger generation, but is the sole source of MRD, the one chemical absolutely vital for the mechanism to function. The arrogant, recherché investor is not ashamed that his single priority is raking in the dough. He looks down on Jim, calling him Tesla, the name of the unsung hero of the electrical inventions for which Edison took full credit. Jim’s lack of business acumen does not bode well for the triad’s continued ownership of the project, no matter who provides the financing. If there is a flaw in the film, it is that Jim is noble almost to a fault.

The fellows’ goal in such an effort is not to take a journey themselves, but to send something identifiable from the present into the past through an open wormhole. On first try, not everything functions as planned, but a surprise awaits: emerging from the shadows is a beautiful woman who just happens to be familiar with the technology and players involved in previous efforts. We aren’t sure if this sexy tease, Abby Ross (Brianne Davis), is supporter, spy, or something altogether different, but what is certain is that she gets under the skin of Beale, who, throwing caution to the wind, is aware that she could be playing him and his buddies. At that point, though, she sleeps only with the loaded Meisner. 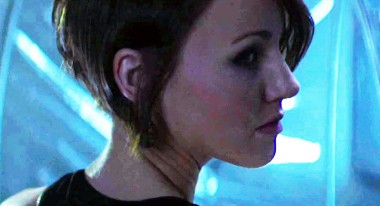 During that first attempt, a gorgeous, multi-colored dahlia, presumably sent from the future, conspicuously appears in their makeshift lab. To the guys’ chagrin, this is the only evidence, scant at best, that their effort met with some success. More than likely, one of these explorers will have to try to split the fabric of time and space in order to validate or reject this tad of proof, if they can squeeze additional MRD out of tight Meisner. If a second stab proves fruitful, two versions of the same person, the same consciousness, would need to coexist in an impossible situation. According to borderline idiot savant Matty, only one person can take a place in the universe at a time. Anyone who takes the trip risks returning greatly transformed. Duplication becomes integral to the narrative; Gentry achieves it in camera, with stop motion and time lapse macro photography. CGI? Out of the question.

To insure the narrative and formal cohesion of this assemblage, some of it far from what most of us might dismiss as conventional, expected responses, Gentry builds an ambience highly indebted to film genre. Think about it: Genre is rooted in sameness, in the expectation that replication of previous commercial success is usually a surer guarantee of profits than untested innovation. His revisionist approach combines two styles that might seem incongruous: the futuristic and the retro. 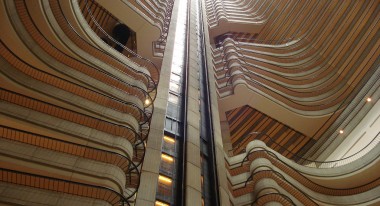 Other methods might subscribe to a linear, this-or-that mentality, inconsistent with a subject that punctures the usual myths about the nebulous M.O. He brings together imagery, behavior, and other properties hinted at in the scenario. Elements taken from low-budget science-fiction features from the ‘50s through the ‘80s (it is typically compared to Blade Runner) mix almost seamlessly with characters and characteristics from film noir. Jeffrey Pratt Gordon’s eye-popping production design mimics the main subject — the flux of time — as does Ben Lovett’s spectacular, persistent, synthesized musical mix of percussion, piano, horns, and classical chorale that swings between abstract atonality and fibrillating, unsettling sounds. (It is typically compared to Vangelis.) Volume adjusts accordingly.

The film’s futuristic architecture is brutal, clean-lined, in the corporate John Portman style of the ‘70s (Gentry shot the film in Portman’s iconic Hyatt in Atlanta). Spaces are vast, open, unfussy, subscribing to an alienating aesthetic created principally out of smooth concrete, similar in effect to the sci-fi pictures (okay, lower cost factors in). DP Eric Maddin’s mélange of camera angles, reflections, alternating light and dark filters, and explosive colors (the wormhole openings are psychedelic) bring to life the heavy, inert structure, as do Portman’s numerous signature cage elevators moving non-stop up and down the huge open atrium. In spite of these concessions, claustrophobia hovers over the sophisticated tale, with powerful inserts showing vertical Atlanta by night the rare respite. The partners’ spacesuits resemble a hybrid of what was available back then in Wardrobe and what a hack seamstress might have come up with after witnessing Apollo 11 and the moon landing on TV. 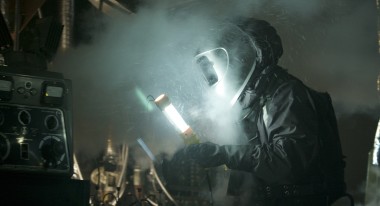 The constant fogginess inside and out evokes noir’s darker implications. Abby is an archetypal femme fatale of the popular genre; the self-consciousness with which she lights and holds a cigarette, and the smoke rings she blows in between rounds of old-fashioned, jealousy-based battles of wit and clever one-upmanship carry hallmarks of noir into the present. She wears such emblematic couture as a chic hooded mantilla. The dahlia is a potent signifier of the genre; it also serves here as a barometer of the human condition, its health echoing that of an actual person.

The generic merger suits the tale: The three men are investigators, scientific ones, yanked from the mystery unit of the noir chambers, and his fatal attraction pushes Jim, under scrutiny as a participating element in the experiment — the film is meta in an understated way — more and more into the role of mid-twentieth-century sleuth. Meisner was born into the role of villain. Abby, whose notebook plays a prominent part in the cumulative process, pulls some alternative answers out of her sleeve once her generic cloak loosens. Now you can see how that phrase about time’s lethal quality at the beginning of this article fits snugly into all the modalities described here—except for the big’un. Gentry goes so far as to reinvent the climax; does Synchronicity end? For maximum comprehension, this rich but dense film may require a reboot.