“I Never Show the Script to the Actors”: Kazik Radwanski on How Heavy This Hammer 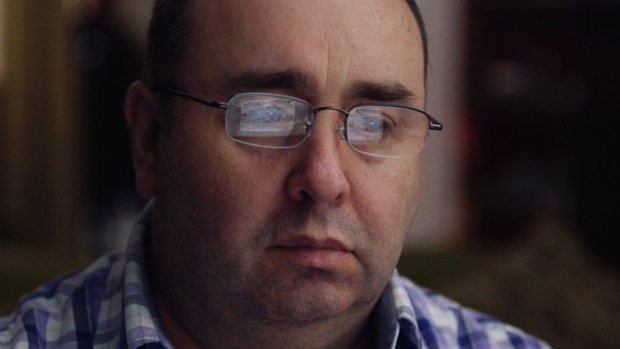 Erwin Van Cotthem in How Heavy This Hammer

With his second feature, How Heavy This Hammer, Toronto-based filmmaker Kazik Radwanski tackles the trope of the seemingly soulless main-child with a formal intensity that is at once casual and rigorous, and all the more unnerving as a result. Erwin (Erwin Van Cotthem) is unable to find anything of value in his life beyond the mental and emotional respite of fantasy computer games and the brutish diversions of rugby matches. His wife and two sons are nothing more than grating obligations, whose needs nearly drive him to the brink of an all out crisis. Radwanski renders these quotidian frustrations – just “life” to the rest of us – with narrow frames that hue unbearably close to Erwin’s imposing physique, trapping the audience alongside his protagonist in an ultimately self-destructive spiral. Filmmaker spoke to Radwanski about concealing his script from the actors, the dichotomies of his camerawork and more. How Heavy This Hammer is currently screening at the Berlinale, after world premiering at TIFF last September.

Filmmaker: After Tower, this is your second character study of a slightly unstable man in Toronto. Aside from the obvious thematic differences, what did you set out to capture or achieve with How Heavy This Hammer?

Kazik Radwanski: Tower in many ways led to How Heavy This Hammer. With my first feature, Derek’s tragedy might be that he has no responsibilities. He’s 34 but has no spouse or children and he lives in his parents’ basement, which provides this safety net for him. With the new film, I didn’t want the protagonist to have the luxury of being a loner. Erwin is the head of a family but still trapped in a similar crisis.

Filmmaker: The handheld camerawork forces the viewer to digest the film without an emotional reprieve, especially since there are no establishing shots that allow for one to get their bearings. Was there a particular strategy behind this style of cinematography?

Radwanski: I love being up close to people. I love the intimacy, realism and documentary texture that it provides. At the same time, I don’t want us to be too comfortable being this close to people. I don’t want us to have a privileged view of the character or suggest that I fully understand what is wrong or is going on inside their head. I want the audience to experience this a little off balanced or disoriented.

Filmmaker: Erwin seems to achieve a sense of personal satisfaction and harmony when at his computer, and, aside from rugby, it’s his only means of connecting with his children. Do you feel that his gaming habit serves as a demonstration of the dichotomy of modern technology — that it both brings us together and tears us apart with its de-socializing effects?

Radwanski: I like your reading of the video game in the film. I don’t think the role of technology was foremost on my mind when I was making it but I do see positive elements to the game as well as the obvious negative attributes. There is definitely something absurd about the game that I like. It would be a very different thing if he passed his time by doing Sudoku or computer chess.

Filmmaker: The film derives its character revelations very situationally, with the arc proving to be cyclical, as it begins and ends exactly the same. What is your script process like, and how are you able to push along a character who seems to learn little or change from these very situations?

Radwanski: I never really liked the script-writing process. With my first feature Tower, I didn’t even have a script, just a skeleton of script with a few scene descriptions. With Hammer, I did write a screenplay. I’m starting to warm to the idea of writing scripts, and the film did grow a lot through this process. That being said, I never show the script to the actors. I will sometimes give them lines but a lot of the film relies on improvisation. To some, improvising means growing the film and coming up with more ideas and characters opening up more. I was careful not to do that, because it can feel a little unrealistic. A key to this film was that he was a weak character that could overpower people. He can end conversations. He can simply say no. In real life, there are people who don’t like talking about their feelings and get more enraged when you try and reason with them.

Filmmaker: In making a character study, a large part of the film relies on casting the protagonist. How did you come to collaborate with Erwin Van Cotthem?

Radwanski: It took us a long time to find Erwin. We wanted to make sure we found someone who fit the part and looked like a rugby player. It was also important that he was willing to play rugby. The first thing we did together was head to a field and my dad and I taught him how to tackle, ruck and maul. He was a natural, Erwin is an ox. This was important not only for him to be convincing on the field, but also for the shoot itself. It was a long grueling shoot, and Erwin never faltered. He was committed throughout, and really anchored the whole production.