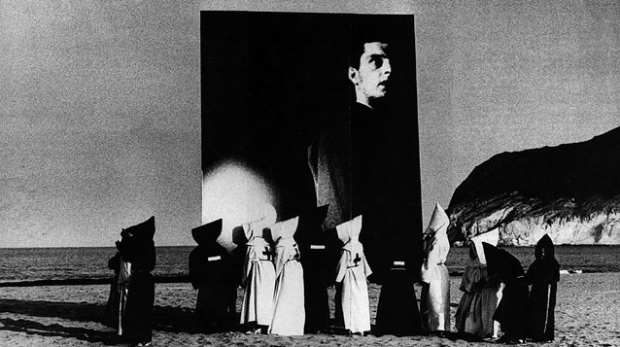 With Paula Bernstein writing today about Guy Maddin’s The Saddest Music in the World, I was reminded to post about a cool internet essay/music project by Ander Monson with Megan Campbell, March Sadness. For those a bit blue, and no following college basketball — and, probably, more than a few who do — the month-long series has paired off sad songs for voters to up and downvote, mixing in essays on the music by Rick Moody, Juan Diaz, Megan Campbell and others.

So this March I’ve been running this project called March Sadness. Well, I’m already oversimplifying: we have been running the project, my wife and I. Actually, still oversimplifying: we’re running it with a bunch of writers and musicians and listeners and voters and friends. It’s a bracket that we made of the saddest songs of the college rock era (think MTV’s 120 Minutes and the world it inherited and built and the world it collapsed under after, thanks to Napster and so forth), roughly 1980-2001. We (The Selection Committee) selected and seeded the songs with some rules: no more than one song per band, those dates are strict, and we tried to select for some different sorts of sadnesses, which meant that we didn’t necessarily choose the absolute saddest song by every band represented on there (like I know that there are sadder songs by Low and Slowdive and Indigo Girls…probably). Feel free to naysay in the comments or suggest oversights as you like.

The series is in its final four: Joy Division’s “Atmosphere,” Tracy Chapman’s “Fast Car,” Jeff Buckley’s “Hallelujah,” and “Pictures of You,” by The Cure.

When I was an undergraduate, I knew a guy, I think he was a med student, who took up with a young and ambitious and attractive gay man who was studying in the sort of art/film/semiotics ghetto where a lot of my friends were knights of higher education, and these two, the med student and the painter/filmmaker guy, were lovers for a year or so. Then the med student, who by then was painting mainly, did the unthinkable. He went back over the fence, and took up with a woman. It would have been, in those days, politically incorrect, but he seemed happy, having gone back over the fence, and who was going to talk him out of being happy. Life went on for some months, and we argued about Mao and Derrida and Bakhtin, but then the med student, now a painter, went missing, just went missing, and soon it appeared that the most dreadful thing had happened, that he had been murdered, in a park, late at night, not far from campus, a location known for gay cruising. I mean exactly what it appears I mean: O weep, for he is dead.

This was about the time that I would have been listening to Joy Division, and the very first singles of New Order. I remember Ian Curtis’s death, which happened at the exact moment that I became aware of “Love Will Tear Us Apart,” the single that cemented the gravity and importance of Joy Division. I didn’t get the song at first. The kind of peppy synth melody that drove it didn’t make sense to me, or rather the mismatch of stridently sad lyrics and uptempo music somehow didn’t call to that feeling. But the b side of the single “These Days,” with the weird synth phasing thing that runs throughout, did it, and that led to “Decades,” the last song from Closer, which became sort of an anthem.

The death of my friend in the last semester of my college years became the end of college, the end of college was the end of my friend, and the collapse was located in the fact that the story was never followed by some idea of justice. My idea of justice was that justice was a thing that never quite came to pass (“Here are the young men, the weight on their shoulders”), never quite delivered its goods and services. Justice was where there was no real causal link between events and events that came after. The incredible resignation of “Decades,” which is very like the loss and resignation of “Atmosphere,” dirge, threnody, drone, was like the abjection of grief and the end of undergraduate years. We wept for the guy, our friend, and the weeping didn’t palliate, and there was nothing to express to his family, except that he had been loved once, and there were things in life that were inexplicable. Another guy, known to all of us, become psychotic, and moved into deeper and deeper stages of privation, until he was living on the street.

Having not fully kept up with the project, I was surprised to see one of the handful of songs that always pops into my head as being essentially sad — “God Damn the Sun,” by Swans — knocked out in the first round by Tori Amos.

Above still from Anton Corbijn’s video for Joy Division’s “Atmosphere.”